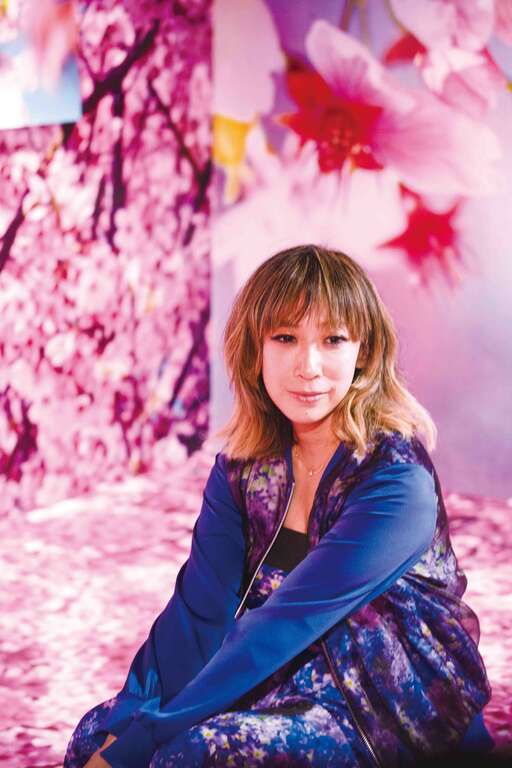 Sumptuously gorgeous visual works – that’s what Japanese photographer Mika Ninagawa creates. Her unique aesthetics were recently on view at the Museum of Contemporary Art, Taipei (MOCA Taipei) (台北當代藝術館), her chosen venue for this retrospective. Visitors to the exhibition were escorted on a tour of her creative career and here she shares with readers Taipei through her eyes. It is commonly said that nothing surpasses the beauty of cherry trees
in full bloom, and that the _owering is sadly all too brief. Flower-loving Ninagawa, however, adores this brief yet glorious appearance of blossoms. Her given name, Mika, means “flowers which blossom and bear fruit.” 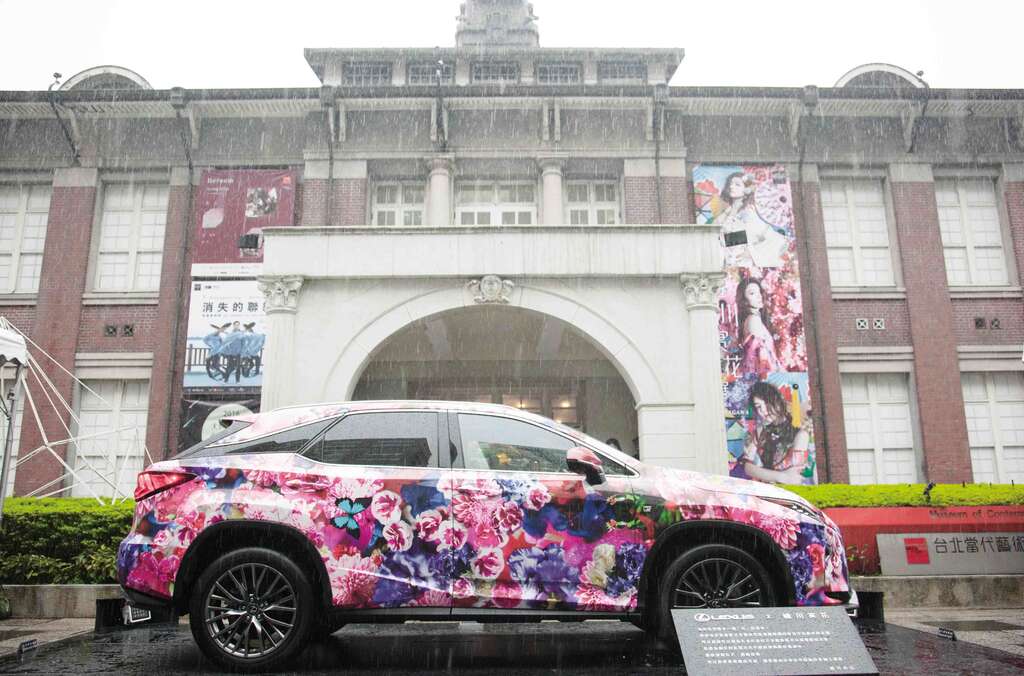 1. The MIKA NINAGAWA exhibition is a showcase of the artist’s nearly 20 years of work in the field, displaying cross-boundary dynamism using a variety of media.

It was chosen by her mother, in the hope that she would live her life with the same vitality as fresh flowers, which blossom and yield. In her oeuvre she has patiently recorded life’s rich vitality, and though the life of a flower is fleeting, she is able to preserve its moment of glory for eternity. 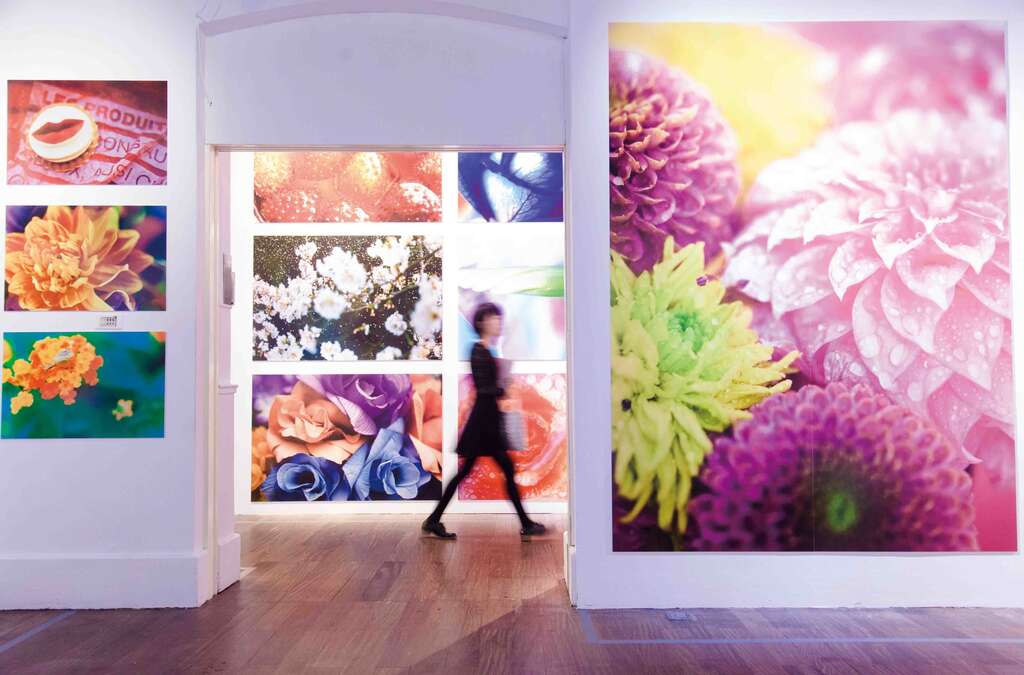 Photography as a Form ofHealing
“The disappearance of traditional film happened far faster than I ever imagined, which makes me a little sad.” Digital photography of course brings greater convenience, with the camera able to follow her thinking, capturing the picture seen before her at any given moment and allowing for more creativity in post-production, enabling her unique aesthetic to blossom.

In “creative mode” at all times, Ninagawa has had moments of dilemma, unsure of whether to press the shutter button. This was after the Tōhoku Earthquake in 2011, when the whole of Japan was mired in the pain the disaster had wrought.

The cherry blossom season began right after the earthquake. “I thought that as a photographer what could I do for people?” she says. “At that time no one had the heart for something like flower enjoyment, but I decided to record the blossoms, so that later, when people thought about that year’s cherry blossoms, they would see that there had indeed been scenes of dazzling beauty.”She took 2,500 shots in a week. It was her goal to help Japanese society escape its trauma, using photography as an alternative form of spiritual healing.

Falling in Love With Taipei’s
Vitality and Warmth
In recent years Ninagawa has frequently traveled in Asia to engage in crossover collaborative ventures. She has been to Taipei 20 or 30 times, she says. This year, she chose MOCA Taipei as the first stop for her overseas retrospective, seeing Taipei as a launch-point for other cities in Asia.

Her first visit to MOCA Taipei, says the artist, was seven years ago. That visit inspired her to stage her own show there. That dream became reality. “Such a large-scale retrospective is a first for me,” she states. “In addition to the large number of visual works, a space was designed where visitors could take their own photos, integrating their own ideas into the overall exhibition. I felt very happy, and at the same time this was a great challenge.”

Over the years she has worked with many Taiwan entertainers, including Jolin Tsai (蔡依林), Ashin (阿信) of the rock band Mayday (五月天), and S.H.E. Her impression of the Taiwanese is that they are affable and easy tocommunicate with. For Ninagawa, Taipei’s essential charm is its renqingwei (人情味), or warm hospitality. “The people of Taipei are earnest and enthusiastic, giving you a feeling of great spirit and vitality.”

Another aspect of Taipei’s beauty, she has observed, is how it takes new things and ideas and melds them into the traditional.“They like to introduce new concepts to tradition, giving Taipei a distinctive dynamism.” This characteristic is the city’s most enchanting and compelling feature.

Having developed deep affection for the city, this year Ninagawa is planning to photograph for Taipei City, in order to promote Taiwan-Japan tourism exchange. “The preliminary concept is to photograph flowers related to the city, such as the azalea.”Surprises are in store for the public, she says. Although she is sworn to secrecy for the time being what is certain is that the theme will not drift from the flower portraits at which she excels.

Leaving work aside, Ninagawa has her own special ways of having fun in Taipei! She says that in February she headed off to a hair salon to experience hair washing Taiwan-style, laughingly adding that “This means lathering your hair with shampoo, then piling your hair up so that it stands straight.” A big fan of the city’s food, she loves meandering the big night-markets on the hunt for different delicacies to try, in true Taipei-aficionado style. 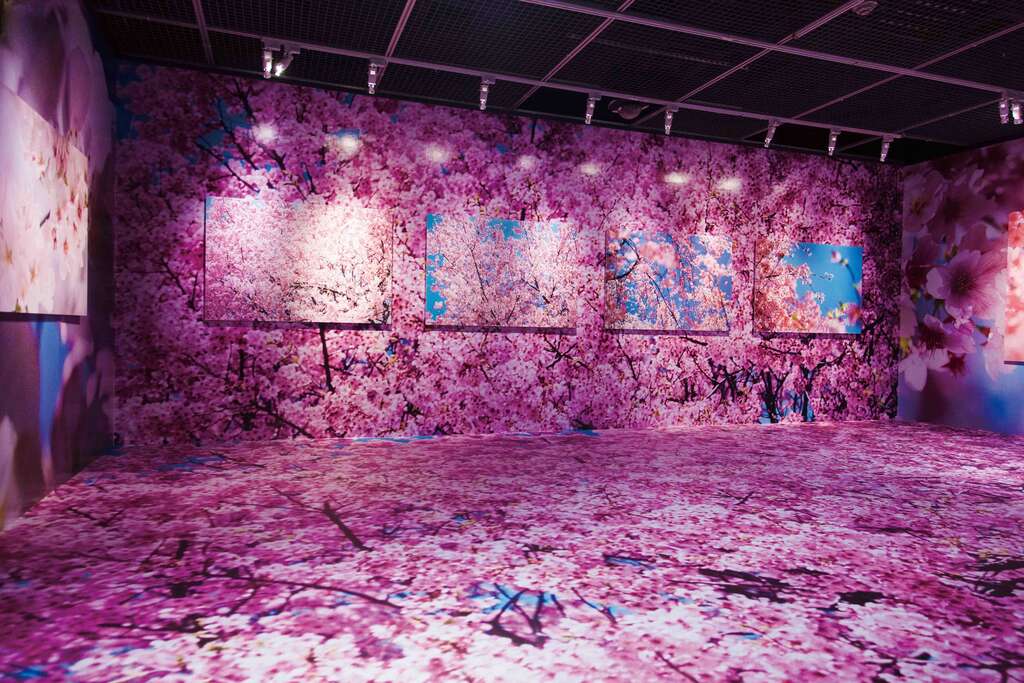 3. Ninagawa took 2,500 photos of cherry blossoms after the Tohoku Earthquake in 2011, and published them in the book SAKURA.

Photography Retrospective Revives the Classics
From compelling renderings of flowers and goldfish to portraits of people and even self-portraits, the MIKA NINAGAWA (蜷川實花展) retrospective covered six major themes, presenting her collection of work from different angles.

Flowers Series: Ninagawa takes joy in capturing those fleeting moments when small insects or butterflies alight on _owers, feeling that in such instants the boundaries between objects are blurred. She also delights in capturing those moments when flowers are stirred to life by the wind or a breeze, and are thus displayed in different character.

Liquid Dreams Series: The artist sees goldfish as an aesthetic phenomenon. They are artificially cultivated by humans as an artistic ornament, bringing feelings of joy. She also goes beyond this concept, looking at the value of material objects in human culture, using the beauty of the goldfish to reflect on the truest nature of humans.

SAKURA Series: Almost overwhelming the senses, the four walls and floor were covered in images, as the beauty of the cherry blossom was explored in extravagant, magnified detail. This is Ninagawa’s record of the sakura blossoms that followed heTōhoku Earthquake of 2011, a reminder to people not to underestimate the power of nature, and that the vitality of life is not stilled by disaster.

Portraits Series: Japanese stars and other Asian entertainers have appeared before Ninagawa’s camera lens and such portraits present her gorgeous aesthetics. Though admired by many, there has been criticism that her stacked layering is too heavy-handed.
She explains that, “The impression most people have of Japanese art is of simplicity. But, there is more to Japan than such minimalism. Complex color stacking is also used, approximating the texturing traditions of Japan’s Rinpa school of painting (a Japanese school of formative arts with a preference for expressive methods).” Her aesthetic layering is hence not mere empty stylization, but springs from a solid historical foundation.

Self-image Series: Differing from the presentation of other exhibited artworks, black-and-white self-portraits were hung in a pitch-black room. Ninagawa hopes that outside of her busy work she can sometimes seek to escape the clamor of the outside world, returning to her realm of inner silence by spending her time only with a camera, and taking self-portraits. Originally, this series was nothing more than self-documentation, with no thought of public presentation. The artist has now made this a public record of her internal monologue.

TAKE OVER THE WORLD Series:
This section was a showcase of Ninagawa’s published photo albums, magazine covers, entertainer portrait collaborations, directed music videos, and crossover commercial product design collaborations. She says that “If my work is only shown in galleries fewer people will see it. But, designing a pen that sells for 200 yen results in more people being exposed to my artwork. This is a different way to reach out to people.”
Website: www.ninamika.com
©mikaninagawa, courtesy of Tomio Koyama Gallery