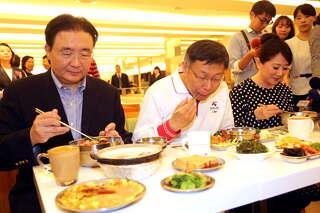 On April 20, Mayor Ko Wen-je attended the press conference announcing SOGO department store’s decision to adopt the ban of disposable and melamine utensils.During his address, Ko expressed his gratitude to the department store for implementing the ban at all 8 branch stores and 153 restaurants and vendors – including dining facilities for employees and the food court.The mayor praised the leadership of SOGO department store for their forward-looking views and open attitude in supporting the city government in its policies on building a sustainable environment.

He admitted that with the enterprise’s support, it will be easier for him to persuade other companies to join the rank and back the policy. He also understands that the biggest challenge is not the acquisition of dishwashers and reusable utensils, but to convince the employees of the values of environmental protection measures.

Pointing out that Taipei’s vision is to create a livable and sustainable city, Ko recalled that many people asked him why not set a fancier objective? He refused and stressed that “livable” means a place where people can live happily, while “sustainable” means paying attention to protecting the environment.

Creating a place where the inhabitants can reside without worries will be sufficient. According to Ko, the key for implementing “value-driven politics” is to place the priority on values. What are the values which Taiwan is trying to achieve? He believes that the answers include democracy, freedom, rule of law, human rights, care for the disadvantaged, and sustainability. Sustainability means issues such as environmental protection and green energy.

The city government’s approach for implementing the disposable and melamine utensil ban is to start with itself before expanding outwards. In April 2016, the ban was enacted for city hall. It was expanded to city schools in August. The next step will be to convince private companies and enterprises. Over the past year, city hall successfully reduced 80-percent paper lunch boxes and 67-percent plastic containers.