With the approach of Halloween, kids and parent are welcome to celebrate the holiday of ghosts and monsters at the 9th Tianmu Halloween Party taking place in Tianmu Commercial District on October 28!

In addition to 250 stores and businesses putting up pumpkin lanterns (the mark for places accepting trick-or-treat), the entire Zhongcheng Road will be closed to traffic on October 28 to host a Halloween parade!

According to Taipei City Office of Commerce (TCOOC) Director Tsai Tsung-hsiung, the Tianmu Halloween Party is one of the most famous Halloween celebrations in town and extremely popular among kids and parents.

The topic for this year’s party is “Masha’s Nightmare,” spotlighting the popular character from the Russian cartoon “Masha and the Bear.” On October 28, performers and dancers will join Masha characters to Tianmu Sports Park to entertain the audience.

In addition, a masquerade highlighting pets in costume also includes the beloved furry friends in this year’s festivities. The organizers have invited 20 teams of cats and dogs to the special catwalk to display their amazing costume. The Halloween party this year will join hands with the Shilin International Cultural Festival to organize the Halloween parade on Zhongcheng Street! Don’t miss this chance to see participants dressed up in costumes and wearing scary makeups roaming the streets of Tianmu!

To boost the atmosphere of scary festivity, booths in front of both Shin Kong Mitsukoshi Department Store and Dayeh Takashimaya Department Store will give away 5,600 pumpkin-shaped buckets to kids, allowing them to join the parade and conduct trick-or-treat at participating stores marked by the pumpkin lantern!

Finally, the nearby Taiwan Shilin District Court will also offer kids a chance to take pictures inside the courthouse dressed in judge’s gown! 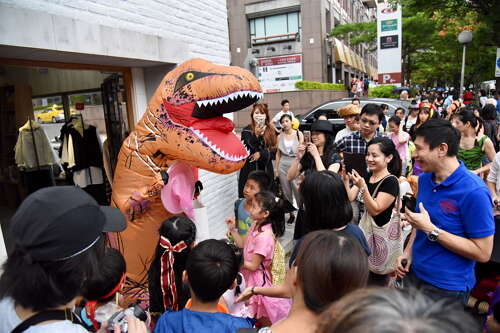