How to Prevent Chigger Bites When Enjoying the Outdoors

As we approach the peak season of scrub typhus, the Department of Health (DOH) reminds the public to adopt preventative measures before going out to enjoy the great outdoors. Since the disease usually results from the bites of trombiculid mites (chiggers), the best way is to keep these bugs at bay with necessary protection.

Based on the data from the Taiwan Centers for Disease Control, there has been 30 confirmed cases of scrub typhus across the island as of April 7. Among these, the majority of cases (14) are reported in the eastern counties of Taitung and Hualien. Yilan reported 4 cases; 3 cases in Nantou; 2 cases in both Taipei City and New Taipei City; and 1 case in Hsinchu City, Hsinchu County, Miaoli County, Taoyuan City, and Tainan City, respectively.

Section Chief Yu from DOH pointed out that scrub typhus is a Category IV notifiable infectious disease. Past figures indicated that cases usually appear around April and May. The trend usually peaks around June and July, with a second wave emerging typically in September and October. The majority of confirmed cases are in Hualien, Taitung, and offshore islands. 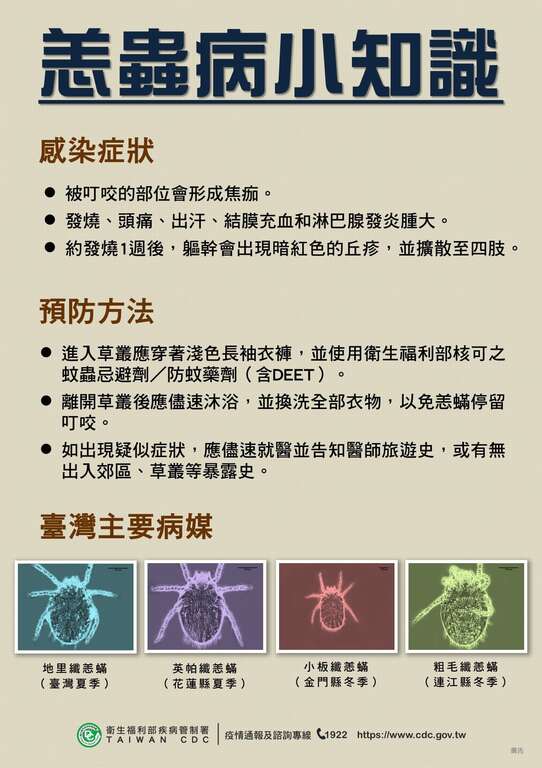 While there have been no reports of human transmitting the disease to human, chiggers – the source of the disease – can be found in overgrown shrubs and bushes. These mites attach themselves to hosts and possible infect them in the process of feeding. After an incubation period lasting from 9 to 12 days, patients start developing symptoms such as high fever, headaches, sores, and inflammation of the lymph gland. Dark red papules start developing around the body after 1 week, and the disease may lead to additional complexes affecting the lung and liver. If not treated properly, scrub typhus may have fatality rates as high as 60-percent.

DOH reminds the public to take precautious such as wearing long-sleeve trousers and shirts, and protect themselves with insect repellents administered over exposed areas of their body. After leaving overgrown areas outdoors, they should wash themselves and their clothing as soon as possible to remove possible attached chiggers.