Taipei City Becomes a Member of the Hybrid City Alliance

The COVID-19 crisis has brought about many changes worldwide. One of the areas which emerged as a key component for measuring competitiveness in the pandemic era is technology application. With the help of advanced technologies, meetings and conference are heading towards greater physical and virtual integration.

To take advantage of this trend, the Department of Information and Tourism (TPEDOIT) announced that it has official joined the Hybrid City Alliance, being the third city in Asia to be admitted into the organization.

Hybrid events integrates aspects of both virtual (involving online platforms) and physical (face-to-face contact and exchanges) activities. This approach taps upon the advantages of both forms of interactions and make such occasions accessible to individuals who cannot travel or prefer to reduce their carbon footprints. This event format has attracted much attention around the world.

Taipei City released its white papers on digital industry transformation policy for the post-pandemic era in February of 2021. One of the focuses of its digital transformation policy is the MICE industry, which integrates technology, soft power, hard power, and in-depth tourism. As of today, Taipei City has already hosted a number of hybrid events, including the 2021 Smart City Summit and Expo and COMPUTEX Taipei. According to a recent analysis by ICCA, Taipei ranks 19th among global cities which adopted the hybrid format for events taking place in the city.

By becoming a member of the Hybrid City Alliance, Taipei City seeks to promote its appeal in the area of MICE and introduce local MICE industry players to more international opportunities. 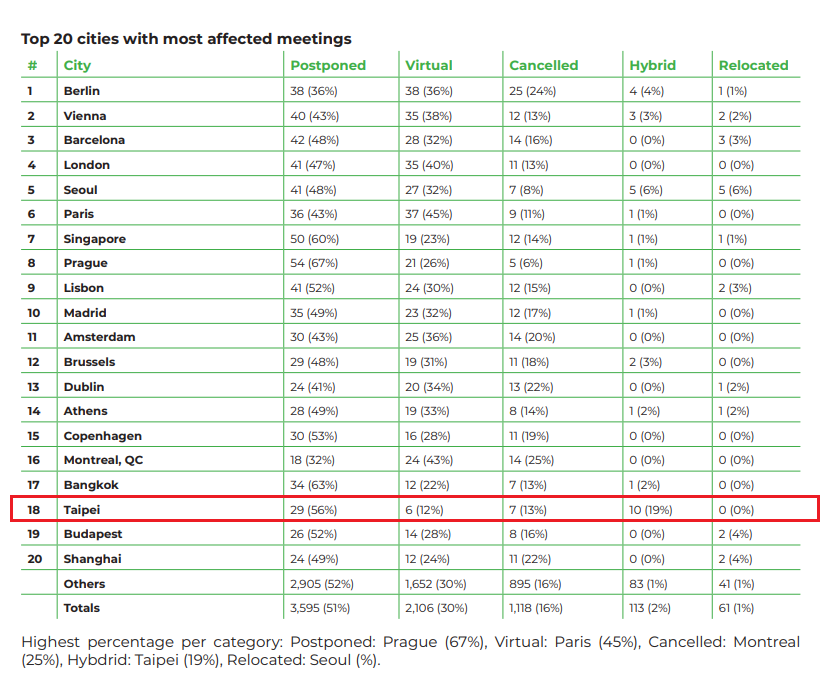