The heavy reliance on smart phones nowadays makes people vulnerable when their device runs low on battery. To relieve pressure for users looking for ways to recharge their phone in a pinch, the EasyCard Corporation has teamed up with ChargeSPOT to set up a battery charger rental service at MRT stations across the city. 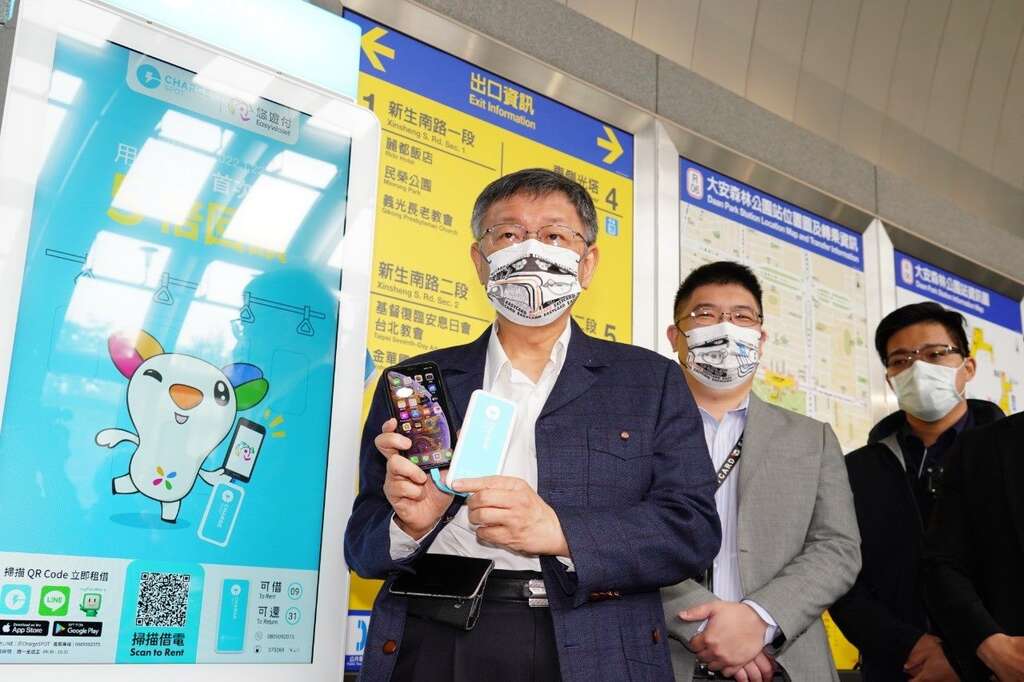 During the press conference on December 22, Mayor Ko Wen-je stressed that the combination of innovation and integration yields great results, and he invites more young people to join the ranks of startups and entrepreneurs. He also promised that Taipei City will remain open to innovators seeking to carry out proof of concepts (PoC) trials, hoping to nurture a new wave of unicorns.

During the event, the organizer announced the official partnership where EasyWallet becomes an official payment channel for ChargeSPOT services. The private company took advantage of Taipei’s living lab offer and secured a deal with city hall to carry out PoC’s for its mobile phone recharge solution at a small number of MRT stations. Thanks to the initial success, the scale of the project has been expanded to include 117 MRT stations today, making the service accessible to the 2 million riders taking the metro every day.

According to the mayor, the EasyCard Corporation, the Taipei Rapid Transit Corporation, and the Taipei Smart City Project Office are among the most innovative agencies within city hall. There are two things the government should do – innovate and integrate. Innovation is something that the private sector can do by itself, so there’s no reason why the government should go out of its way to take the lead. What the government needs to do, however, are things that the private sector dares not, cannot, or does not want to do. The government’s pursuit of “one card, one pass, and one payment” seeks to realize both innovation and integration.

Regarding integration, given that all agencies have their respective history, integration becomes necessary at a certain point. This is when the public sector has to play an active role. He cites EasyCard Corporation as an example – from its humble origins as a way to pay for MRT rides, the card today can be used for UBike rentals and rides on public buses. This is an example of integration. He also talked about the senior citizen card, which is an EasyCard for elders that can be used for the MRT, buses, UBike, and even at district sports centers.

The mayor pointed out that the collaboration between EasyCard Corporation and ChargeSPOT will allow commuters to borrow phone chargers at all MRT stations in the future. This makes it more convenient for users since it offers a way to recharge phone batteries without the need for cash deposit. Individuals can use their EasyWallet and pay with a simple click without exchanging cash.