Around April and May, the illumination of fireflies at night is comparable to the shining stars above. During this period, firefly-spotting becomes highly popular among locals. However, it is extremely important to adopt a number of precautions to ensure that such activities do not disturb the behavior of the lovable insects. 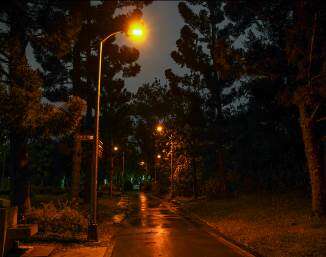 The Parks and Street Lights Office (PSLO) installed hoods to the street lights at parks with firefly conservation areas as one of the measures. Other approaches to protect fireflies include turning off the street lights and replacing the light bulb with special LED lightbulbs designed to minimize impact on the fireflies.

Through these efforts to protect the firefly’s natural habitat, PSLO seeks to create an environment where these precious insects can breed and increase their community size. Likewise, the agency seeks to raise public awareness on park ecology conservation in the hopes of setting up more places for firefly-spotting in the future.

According to PSLO, fireflies are extremely sensitive to strong lights. In addition to turning off street lights, staff members also place different-sized hoods and color filters to the existing lamp posts to minimize the impact of these light sources. Lights with wave length of 590nm are considered ideal, being visible to humans while causing minimal disturbances to the glowworms.

Currently, hoods have been installed for street lights at locations such as Muzha Park (near the lake area), Daan Forest Park, Xiangshan Park, and Rongxing Park. It has also set up 8 special light-filter lamp post at the Tiger Mountain Hiking Trail – near Zhenshan Temple and Yuanman Plaza. In addition, the time for turning on street lights near the Tiger Mountain Hiking Trail Firefly Ecology Area will be pushed back during the firefly season.