In the company of Commissioner of International Relations Tom Chou and Information Technology Commissioner Simon Lu, Mayor Ko Wen-je inked a Memorandum of Understanding with his counterpart Mayor Ricardo Quinonez Lemus of Guatemala City during a video conference on May 12. 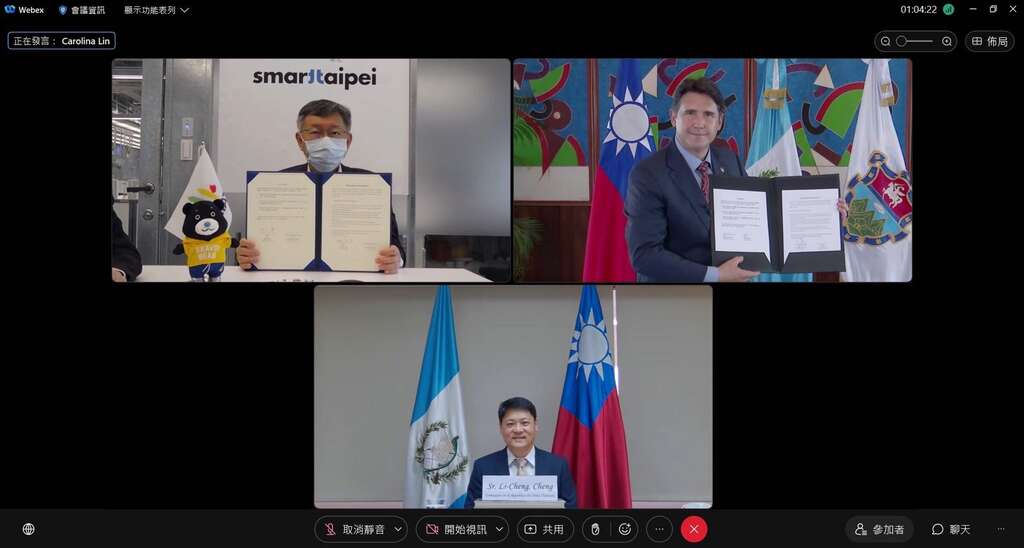 Mayor Ko expressed his gratitude to Mayor Lemus for the latter’s support of the 2022 Smart City Mayor’s Summit. He regretted that Mayor Lemus was unable to travel to Taipei to take part in the event due to the pandemic. He also thanked Commissioner Chou for his help in organizing both the video conference and the MOU on smart city exchanges.

Ko pointed out that COVID-19 has significantly changed today’s world. The pandemic brings both dangers and opportunities. Taipei City has taken action to speed up the digital transition of its industries during the crisis, which have created impressive results. Examples include the establishment of Taipei Urban Intelligence Center; the spread of remote learning and online education, and the integration of virtual and physical aspects of organizing events. These accomplishments help to boost citizens’ competitiveness and promote the city’s economic development.

Mayor Lemus remarked that Guatemala City has embarked on the implementation of smart city solutions, hoping to utilize the power of technology to improve people’s quality of living. Its efforts focus on areas such as smart traffic, 5G smart streetlight, and environmental sensors. He hopes to borrow some of Taipei’s experiences in the future.