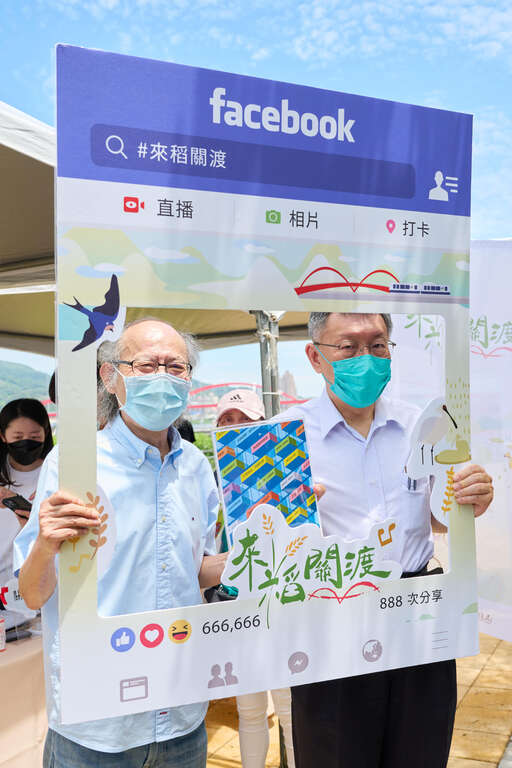 Appearing on the main stage, the mayor joined local delegates in making onigiri (rice balls) with locally-grown rice. He later arrived at the bazaar and took time to watch the modern dance performance “Miro” presented by a flash mob consisting of students from the Taipei National University of the Arts. At the bazaar, he wrote down the words “Peace and Happiness”, expressing his hope that Taipei will continue to enjoy such blessings in the next 20 years.

During his speech, the mayor expressed his gratitude to Chairman Chen Yu-kun of Guandu Temple and community representatives for supporting local events and activities. Noticing the ongoing constructions at the nearby Beitou-Shilin Technology Park, he is confident that the tech cluster will eventually expand to areas such as Shezidao and Guandu. He believes that now is the right time to bid for the hosting rights of the 2038 Asian Games and bring the event to Taipei.

The mayor mentioned that the primary goal of the government is to ensure that the basic needs of citizens are met and the quality of daily life further improves. Guandu is a great place which exhibits different expressions during each season – from colorful fields of crops to seas of blooming flowers. It also serves as the venue for events such as the Taipei International Bird-watching Fair and Guandu International Nature Art Festival. The Guandu wharf will reopen in November, hopefully creating a positive impact upon the neighborhood like the Dadaocheng wharf.

Ko remarked that in the future, the city government seeks to bring out the charm of Guandu by highlighting local characteristics such as natural landscape, ecosystem, religion, and humanities. He noted with regret that the focus of hosting the 2017 Universiade in Taipei was limited to bringing the sports event to a successful conclusion. Not wanting to miss another opportunity to promote urban development, he pointed out that if Taipei is to bid for the 2038 Asian Games, details will definitely include a 15-year-long development strategy for Guandu.