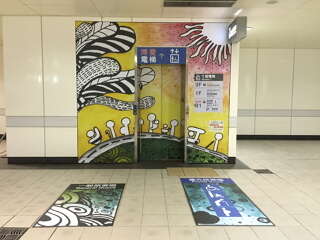 To commemorate the 20th anniversary of Taipei’s MRT system, Taipei Rapid Transit Corporation (TRTC) will be hosting a series of activities in the coming months. The celebration begins with the announcement of an art competition for kids!

The art competition “I’m a Young MRT Rider and Painter” welcomes submissions of new decoration design for priority elevators at MRT stations by students in grades 3 through 6 in both private and public elementary schools of Taipei City and New Taipei City.

The theme of the contest is “Care, Courtesy, Convenience, and Happiness.” The winning design should convey the message of “give way to elders, people on wheelchairs, travelers with baby carriages, and individuals with mobility challenges when taking the elevator.”

The deadline for submissions will be 6 PM on April 7. For details such as registration information and submission format, please visit the Chinese activity website (http://20metrotaipei.nv.com.tw/elevator.html) or the Chinese website of TRTC (http://www.metro.taipei).

The first MRT Line – the Muzha Line – opened to the public on March 28, 1996. The important milestone set the foundation for the development and expansion of Taipei’s metro system up through today. Over two decades, the MRT network expanded from 10.5 kilometers to 131.1 kilometers in total length, becoming an integral part of Greater Taipei’s public transportation infrastructure.