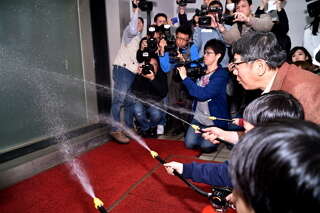 During a visit to the Fire Safety Museum on March 1, Mayor Ko Wen-je urged the public to download the new disaster prevention application developed by Fire Department.

Ko pointed out that the city government has embarked on devising disaster prevention and relief guidelines for students from elementary to senior high schools, taking lessons from a study trip to Japan—a country which places great emphasis on disaster prevention education from an early age. Similar to Taiwan, the island nation is prone to natural disasters such as earthquakes and typhoons.

The city’s education, fire, and health departments have since collaborated to integrate information related to the response to typhoons, earthquakes, epidemics, sexual assaults, domestic violence, and others.

According to the mayor, updating information in the disaster prevention apps is both more efficient and more cost-effective than printing new brochures. The e-approach will facilitate dissemination of knowledge, thanks to the prevalence of mobile devices today.

Ko expressed his approval for the Fire Department for accomplishing the task of developing the app in such a short time. Responding to media’s questions on his opinions regarding the promotion of CPR training, Ko stressed that the city needs to seek even higher survival rates because there can only be “better, but no perfect” performances.