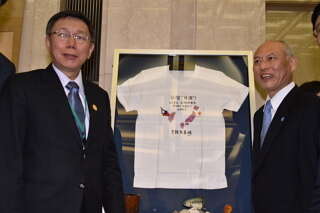 Ko expressed his gratitude in response to the warm welcome extended by the Tokyo Metropolitan Government during his first official visit to Japan, a country close to Taiwan in terms of geography and social background. He hopes to boost bilateral ties starting with engagement between governments of the two capitals.

The mayor stressed that the three primary objectives for this trip include drawing on experience in hosting sports events, disaster prevention and preparedness, and addressing population ageing. Finding possible solutions to help creative industry development, heritage preservation, and marketplace reinvigoration are also on top of the agenda.

He also noted that the visit will pave way for the two sides to establish contacts for future cooperation. For example, city councilors who are members of the delegation have decided to create the Taiwan-Japan Council Friendship Alliance, while a similar mechanism will be put in place for civil servants.

Following a meeting with Masuzoe, Ko shared with the media his observations of his counterpart and what the two of them have in common. He reckoned that the governor of Tokyo, who used to be a professor of the University of Tokyo, did not come from a background related with traditional politics. He also expressed high interest in the books given by Masuzoe about Tokyo Vision in 2020 and Tokyo Disaster Prevention.

Prior to the meeting, Ko attended two briefings arranged by Tokyo Metropolitan Government. One dealt with Tokyo’s plans to create a “hydrogen town” by exploiting the potential of hydrogen energy; the other presentation went over the city’s disaster prevention and emergency measures.