TAIPEI Spring 2019 Vol.15--Throwing Away the Floral Design Rulebook: An Interview with Florist Takako Mine

Throwing Away the Floral Design Rulebook: An Interview with Florist Takako Mine

“There was a large flower shop in front of my home, so I sometimes got a flower for free, or sometimes I’d buy flowers for myself when I was very young. I was always surrounded by flowers,” Japanese florist Takako Mine recalls. To Ms. Mine, flowers have long been a tool to explore the world and a very important part of her life. This did not change after she relocated from Tokyo to Taipei. In fact, her life has never been so bright thanks to the inspiration of Taipei, a city filled with colorful flowers. 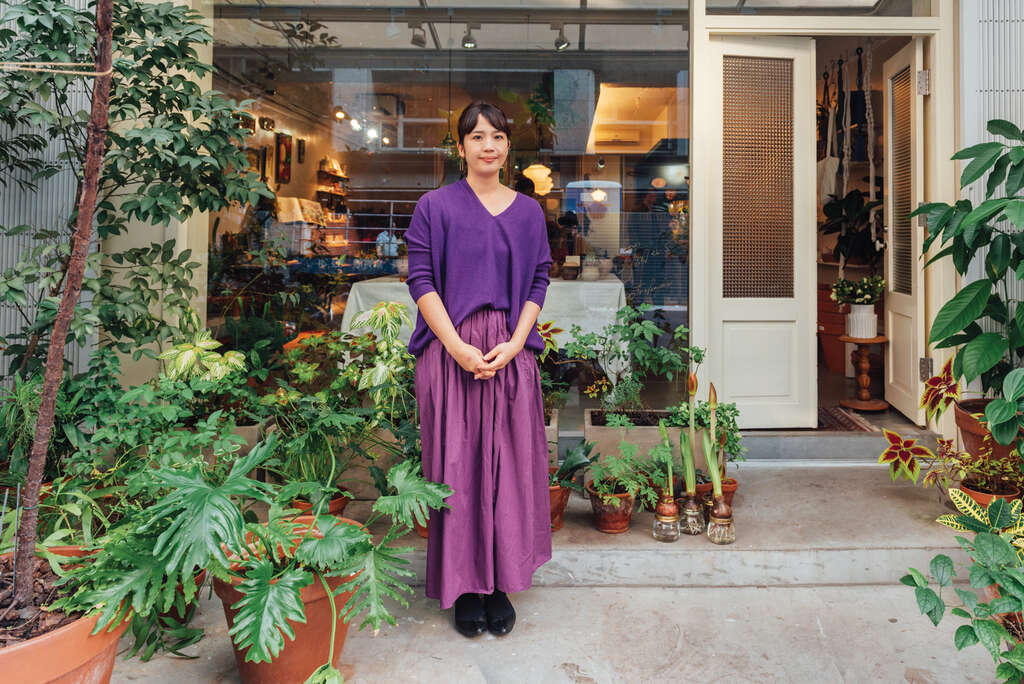 ►Ms. Mine moved to Taiwan with her family to start her new life in Taipei.

MOVING FORWARD IN TAIPEI AFTER THE TOUHOKU EARTHQUAKE

When the catastrophic earthquake of March 11, 2011 struck, Ms. Mine’s child was just three years old. She packed up her belongings and came to Taipei to live with her kind friend for a short while until the aftershocks calmed down. At first, she intended to stay for only a week, but the stay was prolonged by the warm sense of friendship she discovered in the city and her own maternal instincts. With the soft, loving expression of a mother, Ms. Mine says that “I got so much help from local friends in Taipei and also found a suitable kindergarten for my daughter. I finally decided to stay.”

With her new life in Taipei, Ms. Mine finds one fascinating point of the city is that the mountains are within an hour’s drive from the urban core, and flowers can be sent to the flower market the morning they are picked. This is quite unique and rare in the world. “There’s a plantation in the backyard of my daughter’s school that is very close to Yangmingshan. I can go there to pick flowers in the blink of an eye! When I lived in Tokyo, I had to travel to Chiba to do so. It’s just amazing and convenient for me that Taipei is so close to the mountains.” 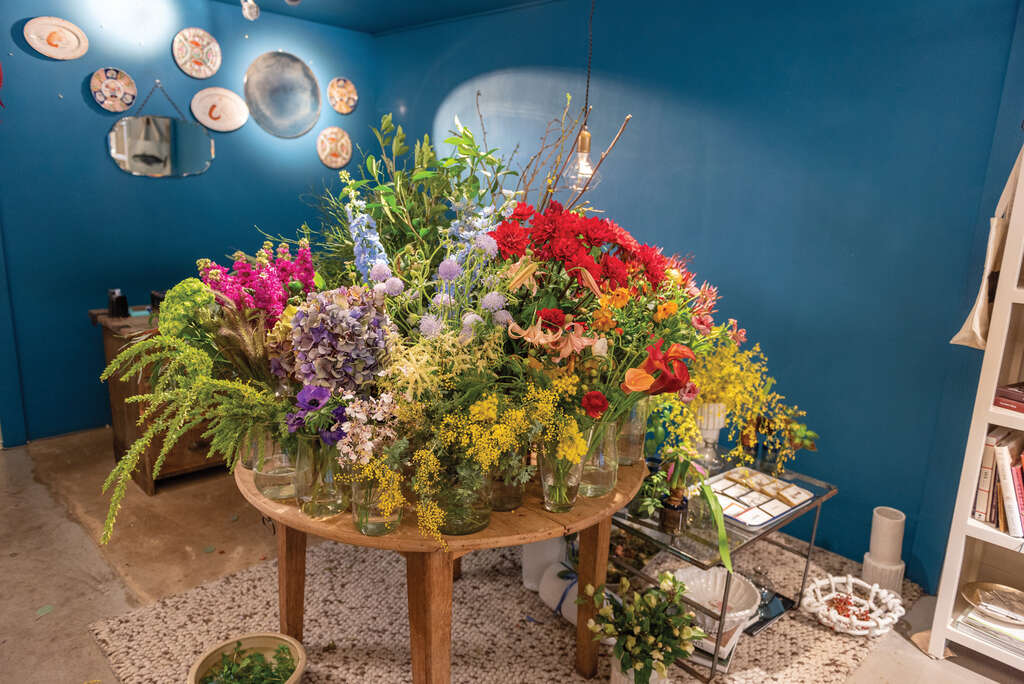 During her post-secondary school days, Ms. Mine studied art in New York. There she discovered art installation, and through that medium she became inspired by and deeply devoted to feminist art.

After going back to Japan, she worked as an assistant at the flower shop across the street from her childhood home and learned how to use flowers in window displays, which inspired her to go back to the world of flowers. Later, she took a job in a flower shop within a lifestyle shop called H.P. FRANCE. With excitement in her voice, Ms. Mine recalls that “Many people working there never studied in any art school or as a flower expert or buyer, yet they worked freely without being bound by any rules. I was deeply affected by their working perspectives.” This gave her a new definition of floral design. A bouquet of flowers did not need to be comprised of a single variety of rose anymore. Instead, it could be combined with different flowers, branches and leaves, or sold together with a vase and miscellaneous goods.

“Since the flower shops in Taiwan are mostly selling flowers for Buddhist altars or orchids as a gift for friends or business openings, I thought I would open a flower shop that sells one flower arrangement for one person instead,” she goes on. “And in Taipei, people seem to always buy their meals from shops but not cook for themselves, therefore they must like to arrange something nice for themselves.”

Ms. Mine started her business with such a simple concept, but her shop, Salon by Takako Mine, is not simply about making flower arrangements. In addition to selling combinations of flowers vases, she has also started many workshops to share her love of flowers. These workshops not only provide participants with the know-how involved in arranging or packing flowers, but also instill ideas about interior design. “I have taken special care to arrange one spot where our customers can enjoy themselves and take a picture. This is a strategy that sets us apart from other flower shops,” she says. 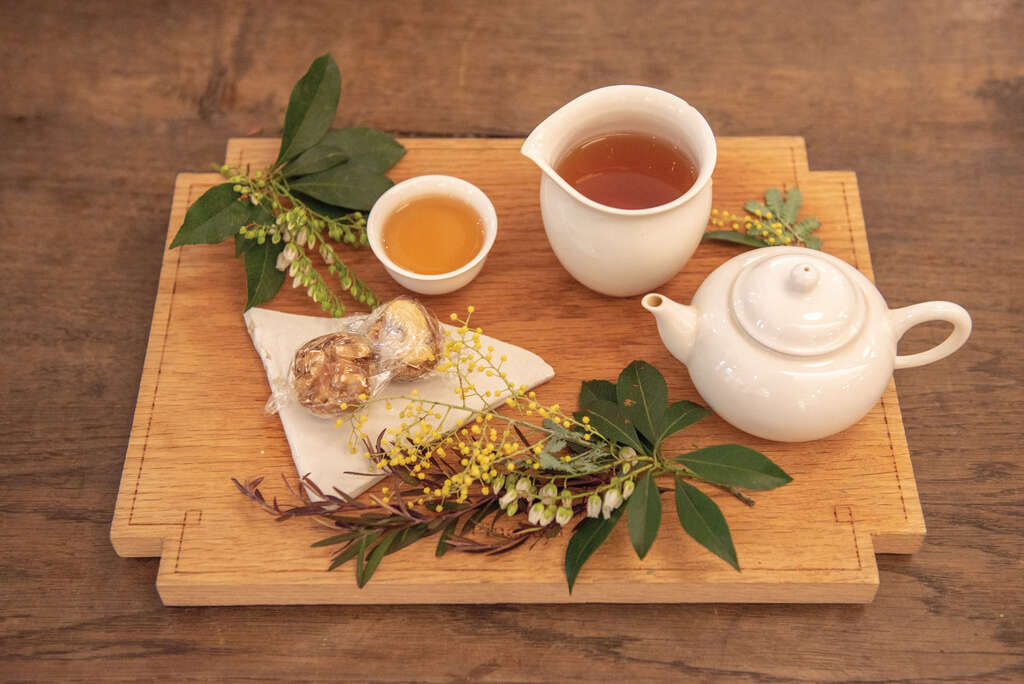 ►The flower shop not only sells flowers, but coffee and snacks as well. 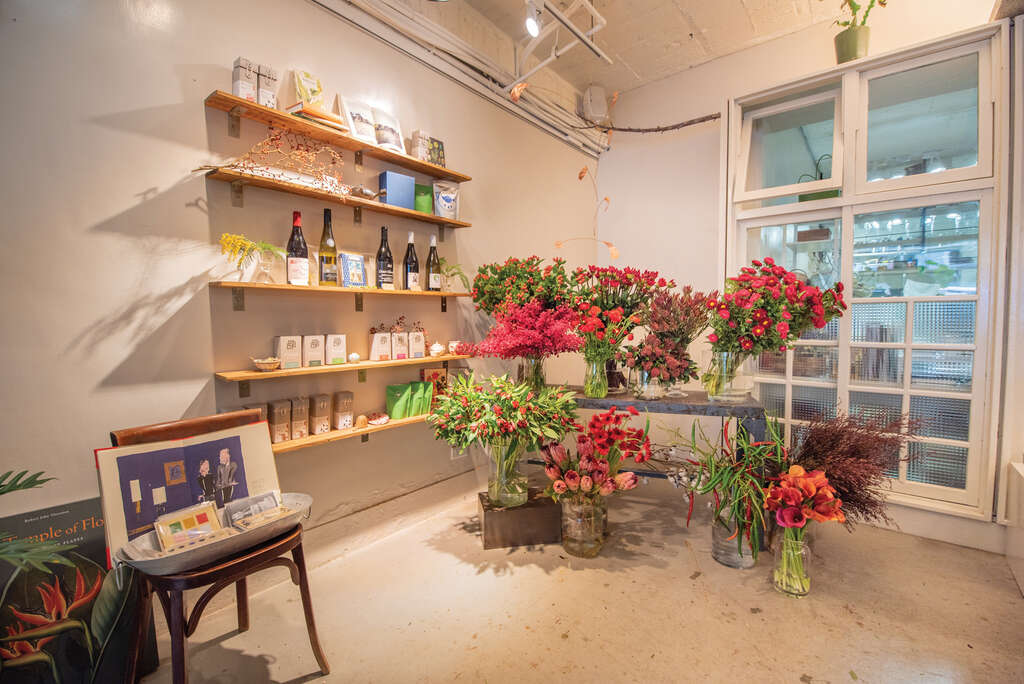 ►Other artfully created items are also exhibited among the floral arrangements and plants.

REGARDING CONDITIONS OF FLOWERS IN TAIWAN

Taiwan has higher humidity and longer daylight hours than Japan, hence larger flowers can be cultivated here, and not merely tropical flowers, either. There are many kinds of flowers growing in the mountains, and countless varieties of fern along with wild grasses growing in fields. Above all kinds of plants, Ms. Mine’s favorite is the Christmas Rose with its especially lush leaves, a species that can also be found in Taiwan.

“When I am walking on the streets in Taipei, I always see apartments with plants growing on the balcony. It seems to me that people living in Taipei are fond of growing flowers at home. Actually, I find more and more people enjoying planting tree as well. I just love to see people’s home gardens to feel their sense of compassion toward their plants”

For people who love flowers, Jianguo Flower Market (建國假日花市) is one of the best places to visit. In Japan, people without proper permission cannot enter a wholesale flower market, but not so in Taiwan. At the Jianguo Flower Market, a great variety of flowers, plants, and even fern families can be found, and all are sold at very reasonable prices. People who love flowers, trees or even succulent plants can find something to suit their needs. Another good spot to go is the Taipei Botanical Garden (台北植物園). There plants thrive in the high humidity, so the best time to go as suggested by Ms. Mine is actually on a rainy day.

The characteristics of the flowers found in Taipei vary by season, but of course those blossoming in spring are very colorful, with an abundance of species. In summer, winter, and autumn, too, countless types of flowers can be seen wherever you go in Taipei, from the surrounding mountains, to the colorful streets, alley and lanes.

Being an independent female and a strong mother as well, Ms. Mine still possesses within her young heart an unbridled passion for flowers, as always. With years of experience in traveling and living aboard behind her, she has now found her sense of belonging in Taipei. Surely, her boundless enthusiasm and knowledge will continue to captivate all who enter Salon by Takako Mine. From Flowers for Home Decoration to Flowers as Gifts

Ms. Mine would like to demonstrate a simple way to make a bouquet of flowers for home decoration, which can also be a sweet gift, in just a few simple steps. 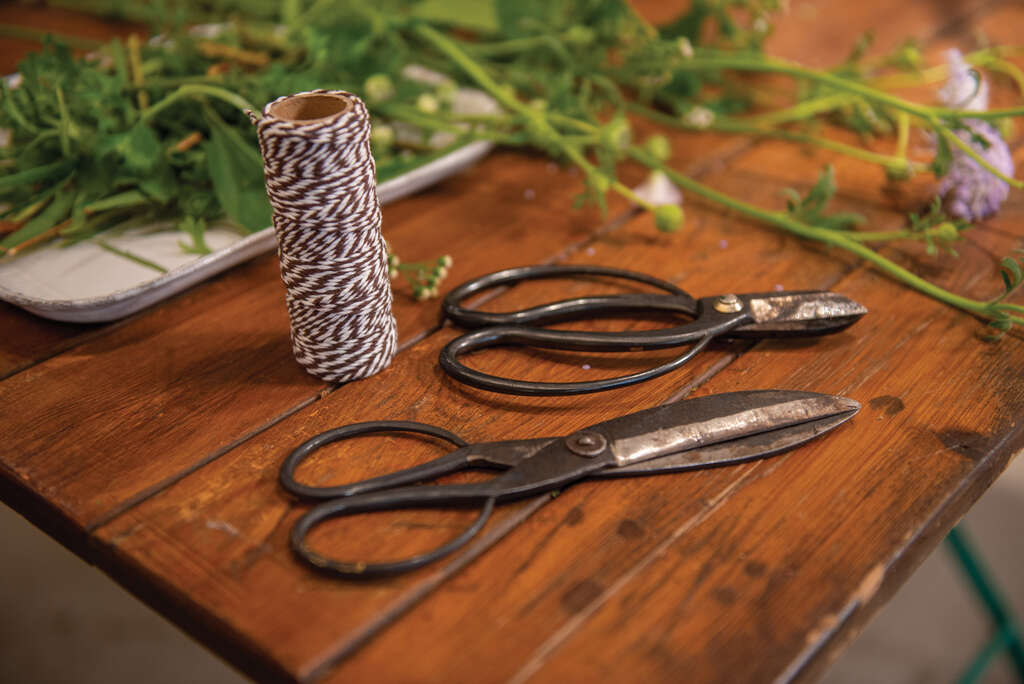 For demonstration purposes, we’re using the seasonal and local flowers Delphinium and mountain lily, adding a few exotic species to dress up the arrangement. 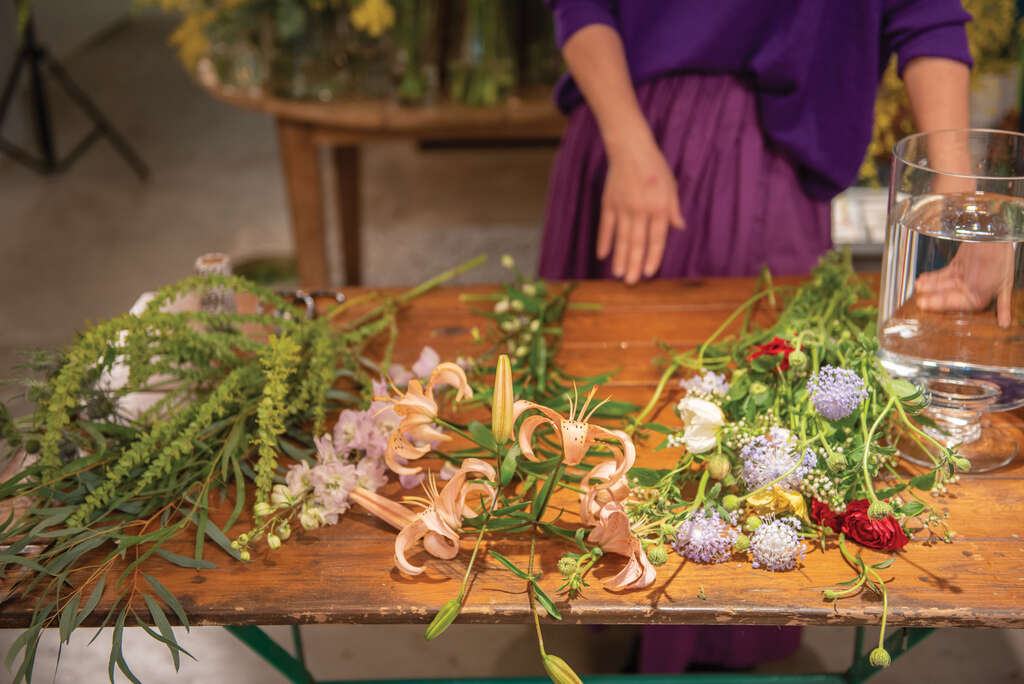 Firstly, arrange the plants in the vase with their best angle towards yourself. Since the plants will grow little by little, they should be arranged with nearly the same height to each other in the vase in the beginning. It is easier to arrange the height of the plants at this stage rather than later. 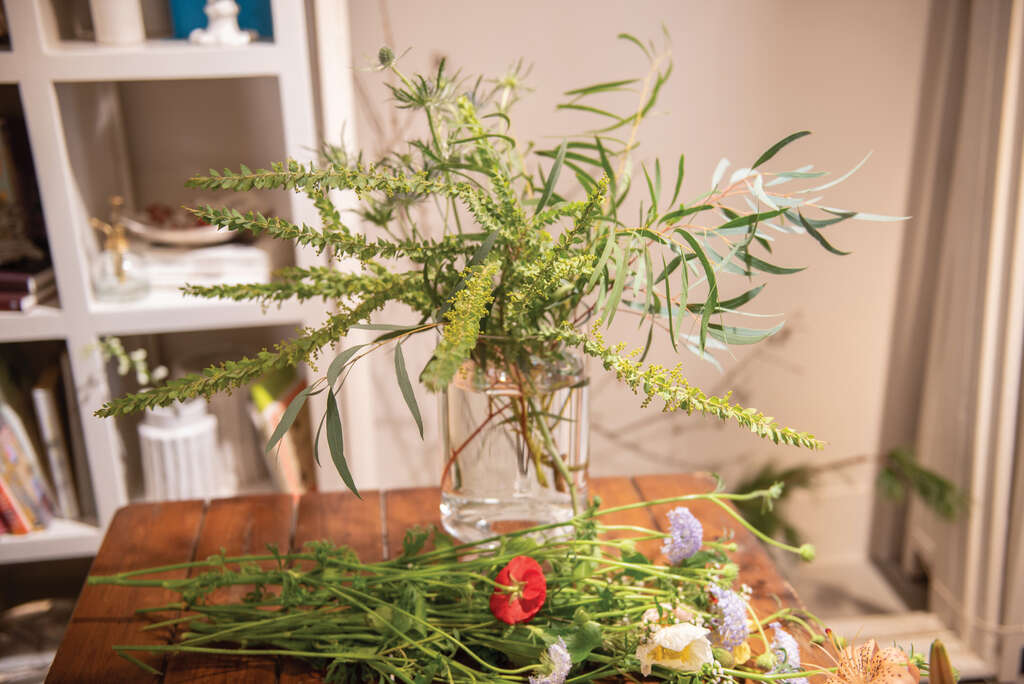 Strip the leaves from the lower portions of the taller flowers and move these to the back side of the vase. Arrange the flowers freely, and to create a suitable spring image, it is advisable to add flower buds, small flowers or wild grasses to the arrangement as well. 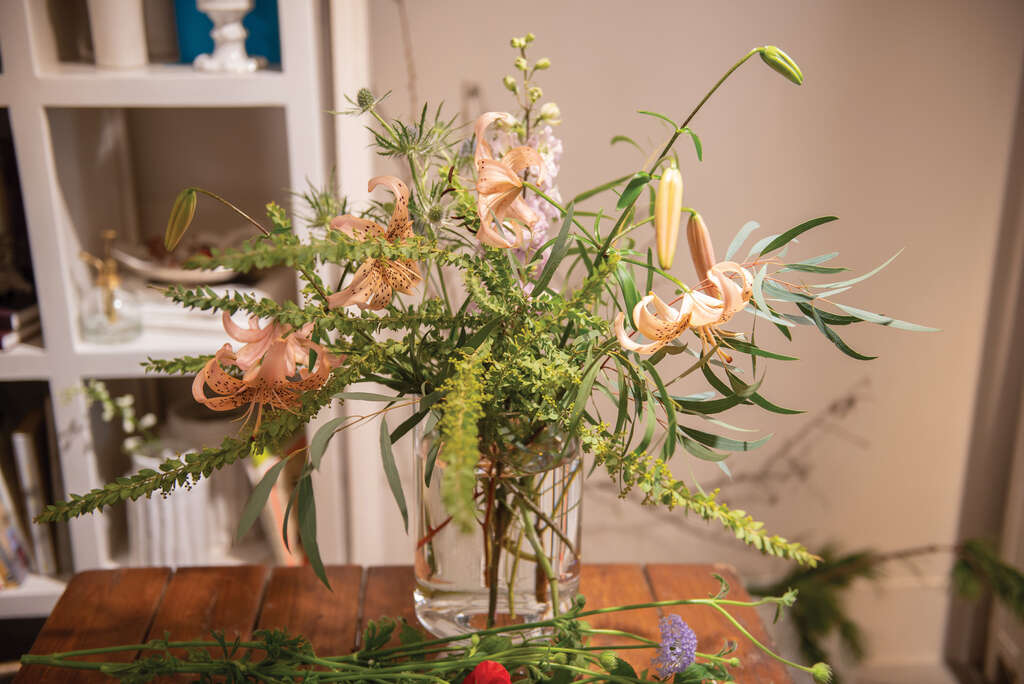 Lastly, for the major flowers, arrange three red flowers into a triangle formation, and adjust its direction to convey a sense of the blossoms swaying freely in the spring breeze. 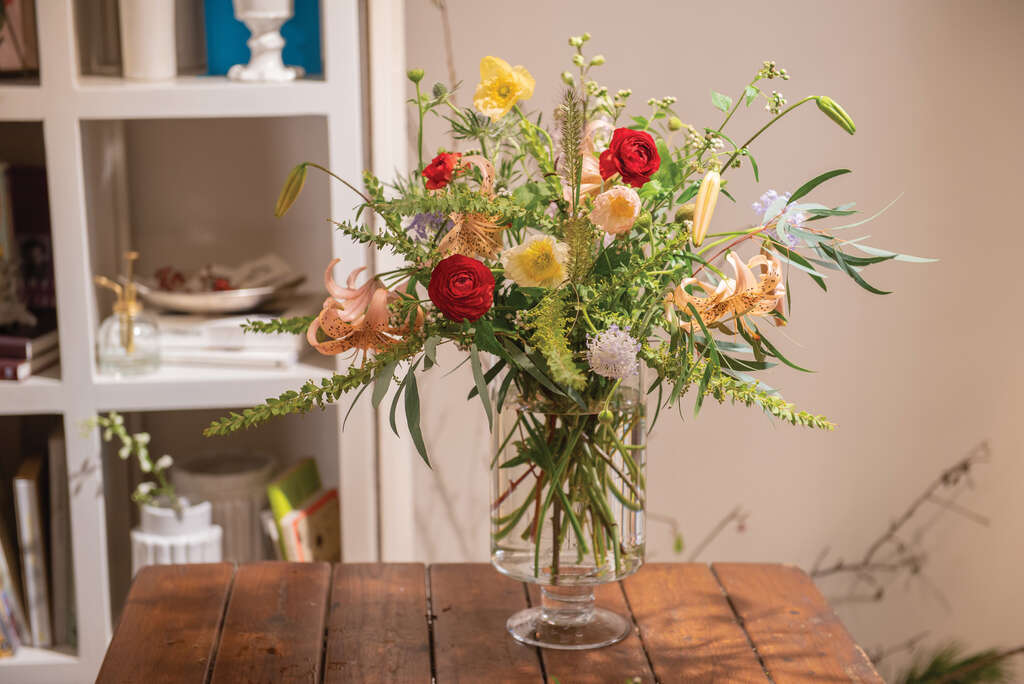 Cut the string first, then hold up the flowers you arranged with both hands, stripping the excess leaves. Next, bundle the arrangement up with two loops of string around the stems of the flowers and cut off the excess string. 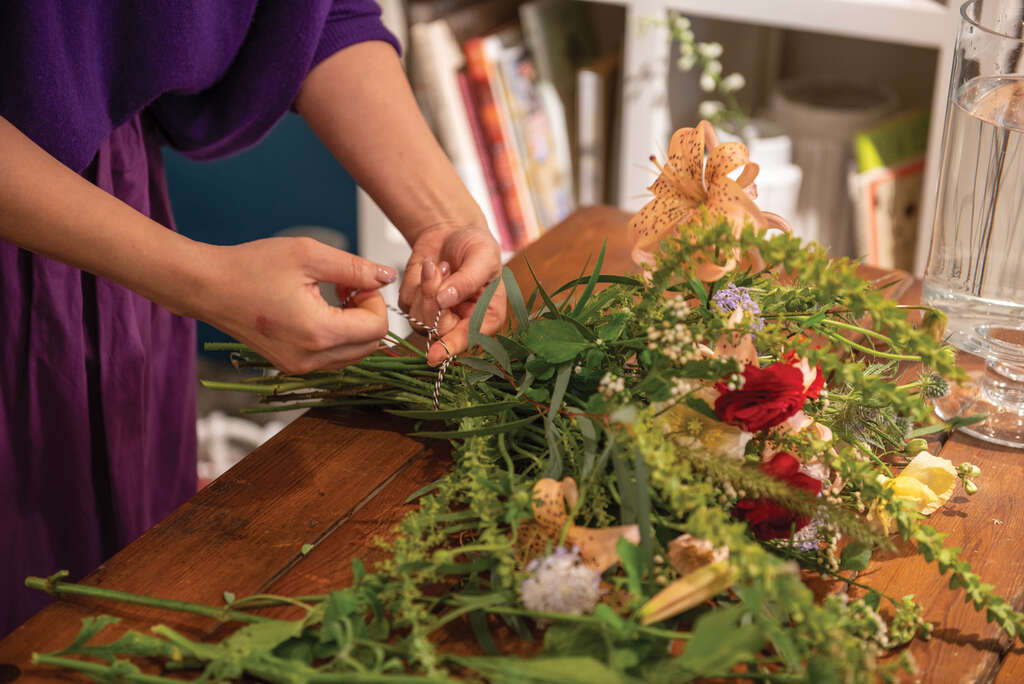 Cut the stems evenly, and the arrangement is complete. 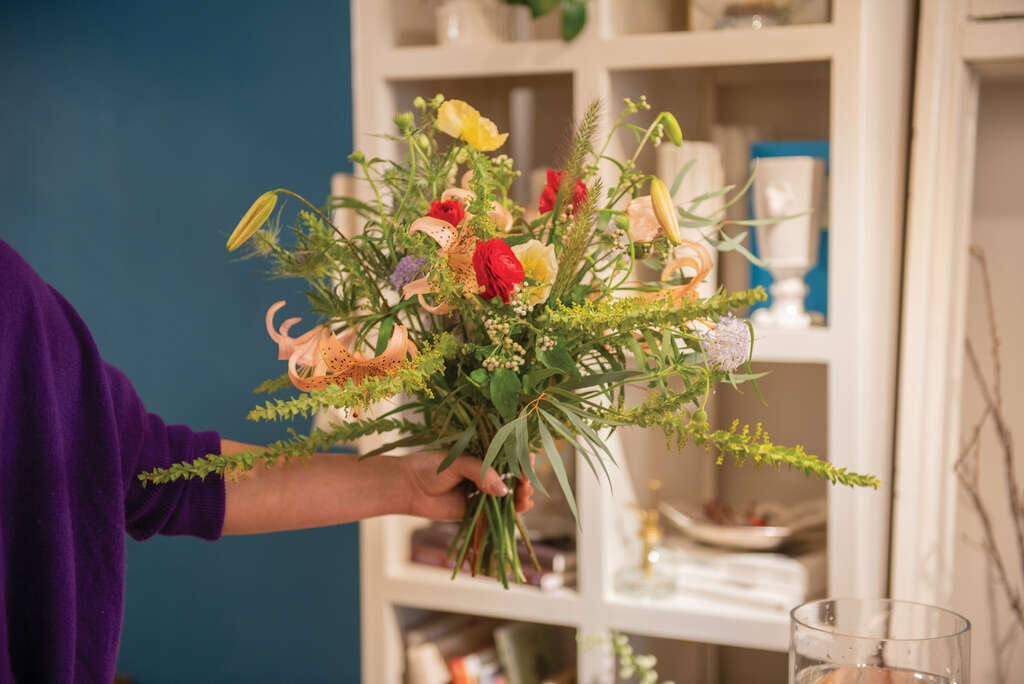 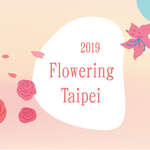 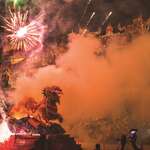 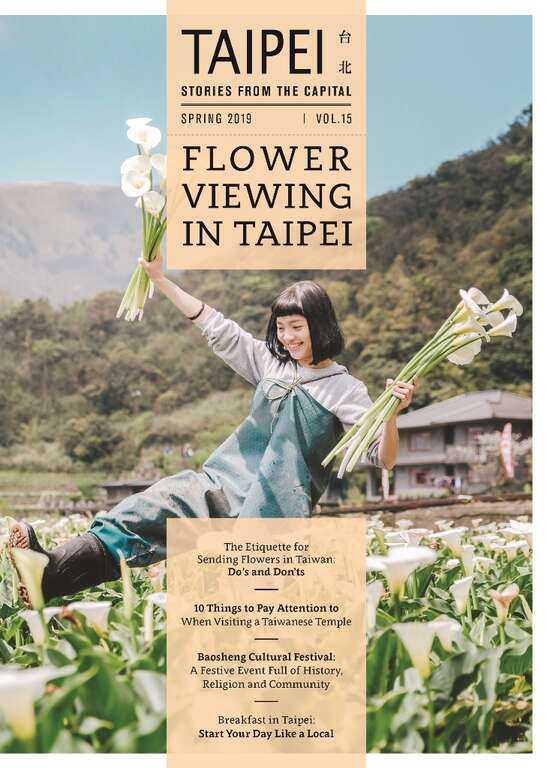