Traveling to Taipei During Ghost Month


If you visit Taiwan in the summer months and the lunar calendar lines up just right, while walking down the simmering-hot streets you might find yourself forced to move out of the way — possibly off the sidewalk entirely. You may have to step aside for long tables heaped with food, joss paper, drinks and snacks, each dish or package stuck with sticks of incense. Behind those tables are likely to be groups of people praying in unison. Metal canisters containing small (or large) fires fed by a steady stream of joss paper might further complicate your route. These prayers are not for gods, however. They’re for ghosts.

You’ve landed in Taiwan during Ghost Month (鬼月), observed during the seventh month of the lunar calendar. Don’t worry. Ghost Month won’t throw your trip into jeopardy, and in Taiwan you will generally be welcome to observe the ongoing ceremonies, known as Zhongyuan Pudu (中元普渡), or politely avoid them as you wish. It’s a good idea, however, to have some knowledge of why and how Ghost Month is celebrated, as well as what actions you may want to avoid.

Ghost month arose as a cultural observance relating to the tale of Maudgalyayana (目連救母), known as Mulian (目連), a Buddhist monk, in Chinesespeaking countries. The story begins with our hero using the psychic powers for which he was famed to see his father and mother after their deaths. He was shocked to find that only his father appeared to be in heaven, and asked Buddha what had happened to his mother. Buddha showed Mulian a vision of his mother toiling in one of the eighteen regions of hell, where Mulian could not reach or help her. Some versions of the tale explain that she was condemned there for hoarding rather than distributing donations meant for the needy. 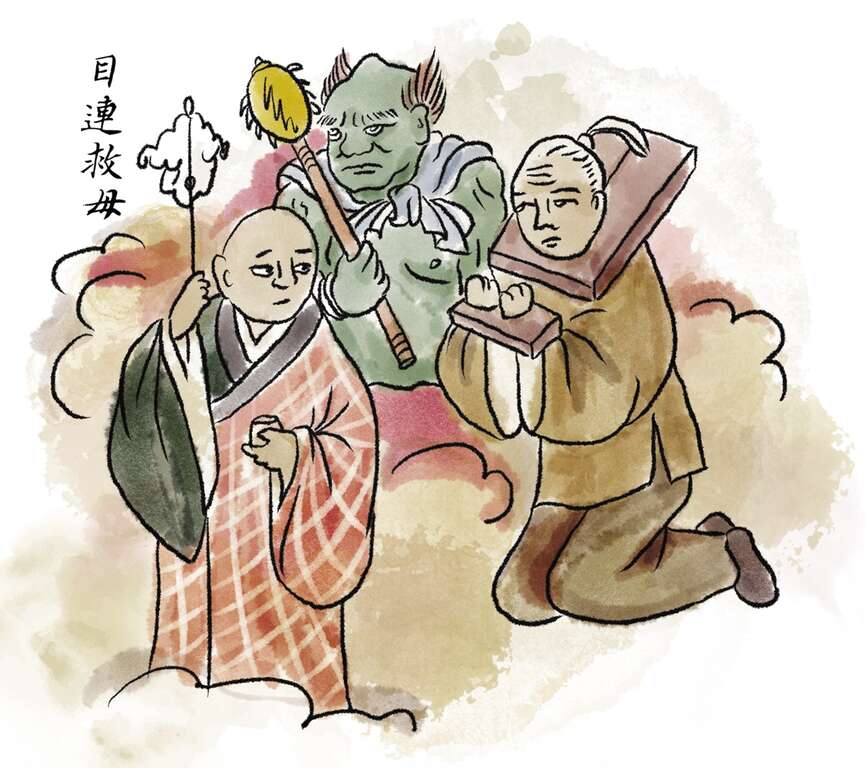 The lord of hell — who is not a demon himself, unlike in Western religious traditions — advised Mulian to do good deeds and make offerings. The merit from these, he explained, could be shared with his mother. This, Mulian was told, might lift his mother out of hell during the 7th lunar month when the lord of hell opens the gates and allows the ghosts to wander the earth, especially on the 15th day of the month, known as Zhongyuan Festival (中元節) or Ghost Day in Chinese-speaking world today. Mulian’s merit-making was ultimately successful, and his mother was reborn in heaven.

For the faithful, it is believed that merit is best transferred collectively - hence the long offering tables and groups of people praying together precisely when the ghosts are said to have left hell and wander the earth. Thus, the story of Mulian is meant to convey the importance of honoring one’s ancestors.

Originally Ghost Day was a one-day festival. The reason why it was extended to a month is because Taiwan is an immigrant society and has experienced many wars over the past four centuries. As a result, many people were left without family members to mourn them properly. In the late Qing Dynasty, in order to appease these ghosts, people began to enact large-scale rituals, and Ghost Day evolved from a one-day festival to the modern-day incarnation of Ghost Month. 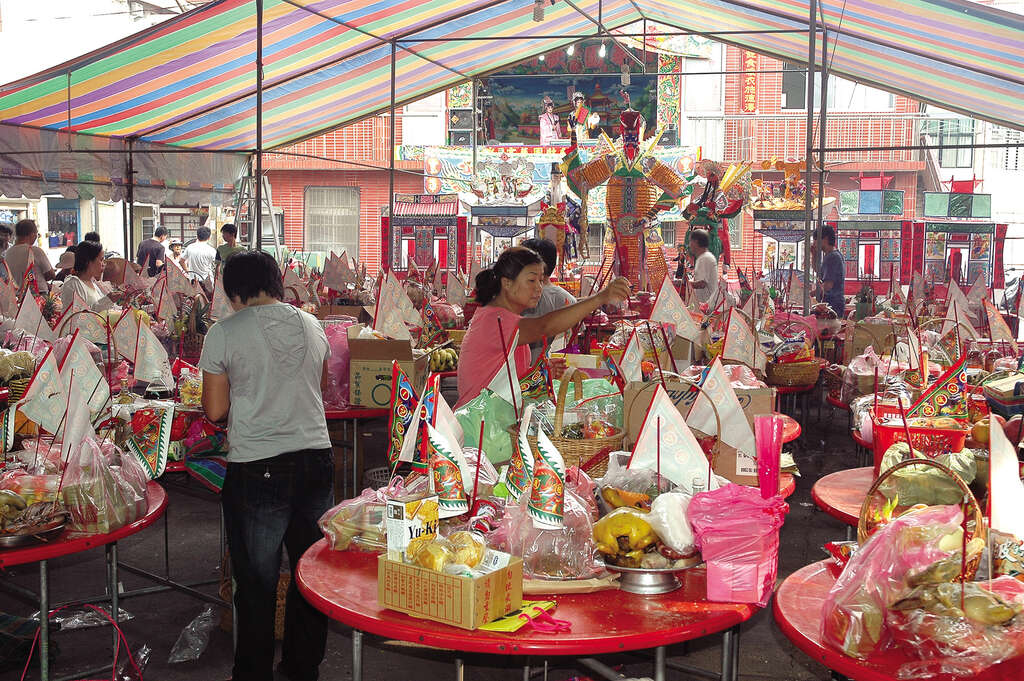 ▲Pudu ceromony takes place in every neighborhood during the ghost month.

Ghost Month may be Buddhist in origin, but its observance features heavily in Taoist and folk beliefs. The moral of honoring one’s ancestors is highly Confucian as well. Families or communities will gather to welcome their ancestors’ ghosts and make their offerings. Not every ghost has descendants on earth, however, and the gatherings further ensure that these homeless or wandering ghosts are welcomed and given their due. If this is not done, it is believed that these ghosts will cause trouble for one’s own ancestors in the afterlife as well as attempt to trick the living. The food on those tables are offerings (which may be eaten later), and the fires are fueled with money for the ghosts to use in the real money of the dead.

Around Taiwan, Ghost Month ceremonies take different forms. One of the largest is held in Keelung (基隆), a port city not far from Taipei. On different days a parade, an offering ceremony (which involves a priest blessing and then throwing food and other items to onlookers, which are collected for good luck) and a water lantern lighting are held. In other places such as Yilan (宜蘭) and Hengchun (恆春), offerings are placed at the top of greased poles which contestants climb in order to grab and keep them. 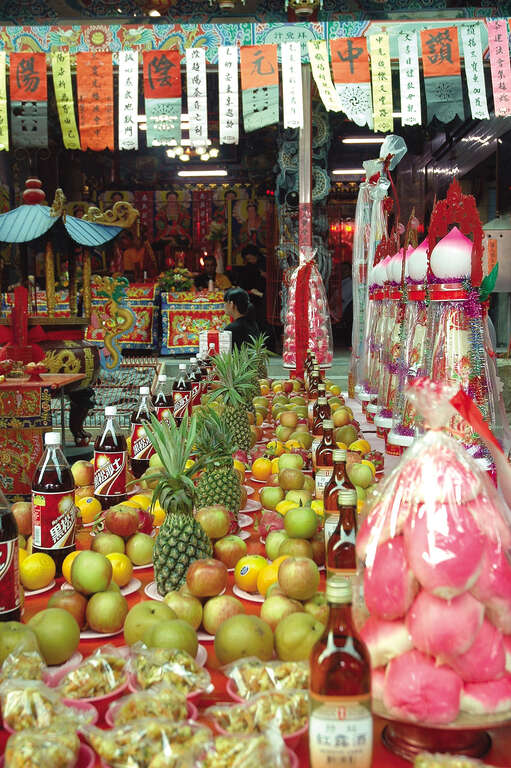 ▲Seasonal fruits and drinks are commonly used as the offering for “good brothers.”

GHOST MONTH: DO’S AND DON’TS
While visitors are welcome to attend these ceremonies, there are some taboos that ought to be avoided. Below are some of the most common.

- Never Call Them “Ghosts”
Avoid using the word “鬼” (gui), as the visiting ghosts might think you are calling them to you. As ghosts are prone to tricks or outright deception, this is not the exciting Ghost Hunters outcome you want. Call them “good brothers” (hao xiongdi, 好兄弟) instead.

- Don’t Stick Chopsticks Upright into Your Food (In Fact, Never Do This)
This started as a Ghost Month custom, as the good brothers might think that the chopsticks are sticks of incense and the food is an offering to them. In recent decades, it has become a general point of good manners, as the “incense sticks” in the rice also resemble the incense burners often placed in front of tombs.

- Avoid the Water (If You Want)
Older Taiwanese believe that ghosts may live in the water, especially open water, which Taiwan has a lot of, being an island. If you swim in rivers or oceans during Ghost Month, some believe that these good brothers may drown you, or trade places with you and live your life on earth as you languish in their place in the underworld. This is more of a superstition nowadays and many young Taiwanese go to the beach during Ghost Month without worry. It is, however, always wise to observe water safety guidelines when swimming at Taiwan’s beaches, many of which experience dangerous rip tides.

- Be More Careful at Night
The good brothers are most active at night. It’s therefore taboo to call someone’s real name or whistle after dark. If a good brother hears a whistle or someone’s name, they may pay you a visit or cause bad luck to the person whose name you called. Use a nickname instead, and it’s considered good practice not to whistle even in daytime. Avoid leaving clothes out to dry overnight as well. The good brothers may take them out for a spin around town, which is considered bad luck.

- Don’t Sit in the Front Row of Street Performances
The front row of performances - especially traditional Taiwanese opera - is reserved for the good brothers at this time. Don’t take their seats - they won’t be happy. 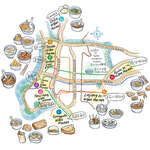 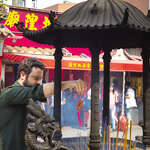 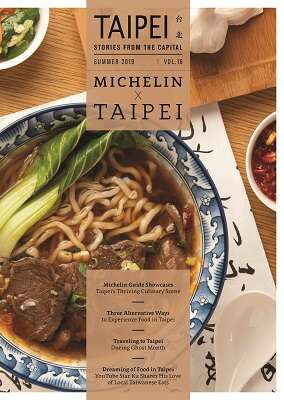