IN THE NAME OF THE FATHER:
SHADOW LEGENDS DRAMA GROUP CARRYING ON TAIWAN’S SHADOW PUPPETRY THEATER TRADITIONS IN TAIPEI 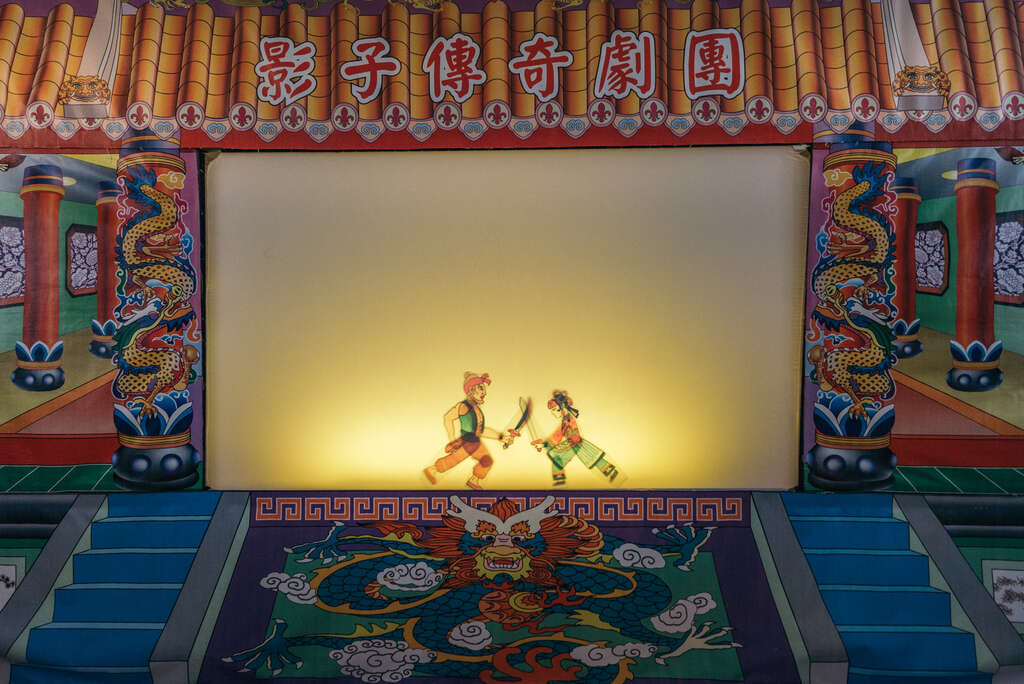 If you’ve an interest in Chinese and specifically Taiwanese traditional folk arts for the stage, there’s a more than even chance you’ve heard of Pili Glove Puppetry (霹靂布袋戲), which has brought Taiwanese glove puppetry to the world’s attention with its mesmerizing “Golden Ray Puppetry (金光布袋戲),” characterized by fantastic battle scenes, brilliantly costumed characters, and bombastic light-and-sound effects. Its movies have entertained around the globe.

You may not be so aware of two other forms, however. Glove puppetry shares stage with marionette and shadow puppetry, called the “three major puppetry traditions of Taiwan.” As elsewhere around the globe, Taiwan’s traditional folk arts are threatened in the face of the myriad entertainment distractions modern life provides. It is the mission of Taipei’s Shadow Legends Drama Group (影子傳奇劇團), northern Taiwan’s sole shadow puppetry troupe, to help preserve the island’s shadow play theater traditions. Troupe leader Hsiao Meng-tung (蕭孟通) explains. 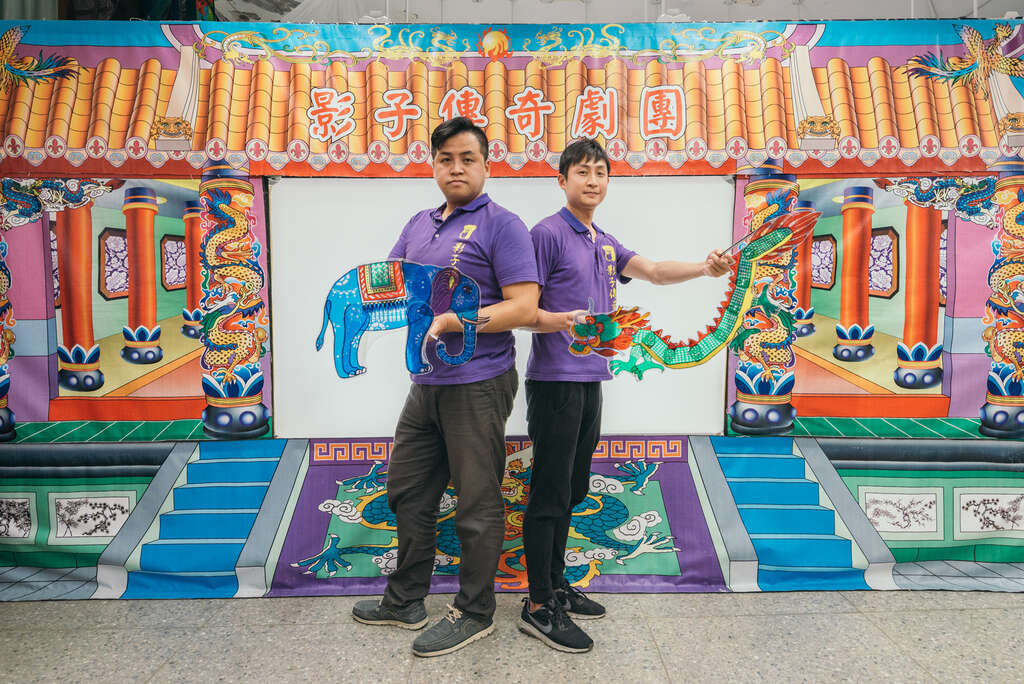 ▲Shadow Legends Drama Group’s leader Hsiao Meng-tung (left) and his brother Hsiao Nai-cheng (right) took over the troupe their father established, and are committed to spreading shadow puppetry to the world.

ORIGINS AND MISSION OF THE SHADOW LEGENDS
Hsiao Meng-tung leads the group with his brother, Hsiao Nai-cheng (蕭乃誠). “We’re carrying on this mission in the name of our father, who founded our group,” he states. “After seeing shadow puppetry performed when he was a boy in Changhua (彰化), central Taiwan, he developed a lifelong interest. Later, after moving to Taipei for work, he was surprised to find no shadow puppetry troupes here, and that people had little exposure to the form. In middle age he decided to learn more, and for years would drive to Kaohsiung (高雄) and back on weekends to study under masters, overnighting on Fridays at his Changhua family home.”

Eventually, after attaining a level of mastery on his own, he decided to form his own troupe, and the Shadow Legends Drama Group was born. “That was in the 1990s,” says Hsiao Meng-tung. “He had two missions. First, seeing the dwindling number of troupes around Taiwan, he wanted to preserve this folk art, so important to Taiwan’s cultural history. Second, he wanted to teach northern Taiwan’s people about it, with the goal of building up a new audience, one person at a time. My father retired about 10 years ago, and my brother and I took over.” The duo has since taken the troupe to new heights, including repeat overseas travels to perform in Hong Kong, Macau, and Scotland, at the Edinburgh Festival Fringe. 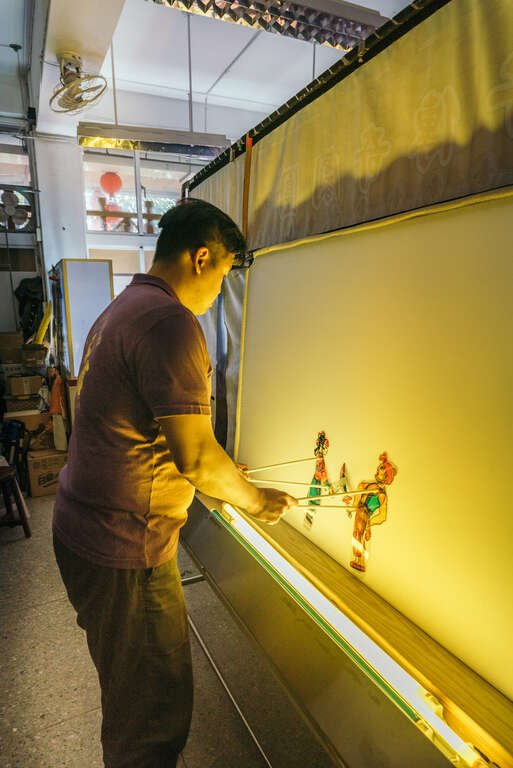 ▲Simple as it may seem in the front of the screen, a shadow puppeteer actually needs years to master manipulation skills behind the scene.

SHADOW PLAY IN TAIWAN — YESTERYEAR TO TODAY
“First — what exactly is shadow puppet theater?” Hsiao Meng-tung says. “It originated in China at least a millennium ago, possibly two. Taiwan follows what is called the ‘Chaozhou (潮州)’ tradition.” In the Chaozhou tradition, the flat, articulated puppets are operated with short rods fixed at right angles to the figure, which are not detachable. The music is similar to the music heard during rituals conducted by daoshi (Taoist priests, 道士). “The standard number of artists for a performance is five: one puppet-master, who manipulates most puppets and does most voices; a secondary puppeteer; and three musicians, who also handle sound effects. The figures are transparent, and a strong light in the rear projects their colorful images (i.e., ‘shadows’) onto a translucent screen, which is what the audience sees. The artists, however, are never seen. In the past all figures were made of leather, but today many troupes use plastic, because it takes four to five days to beat the leather for a single puppet to a transparent fineness.“ The magic of shadow puppetry lies in its ability to present a 2D animated story with the help of colorful puppets, a translucent screen and a stable source of light. It is the intermingling of those indispensable components that makes shadow puppetry so intriguing. 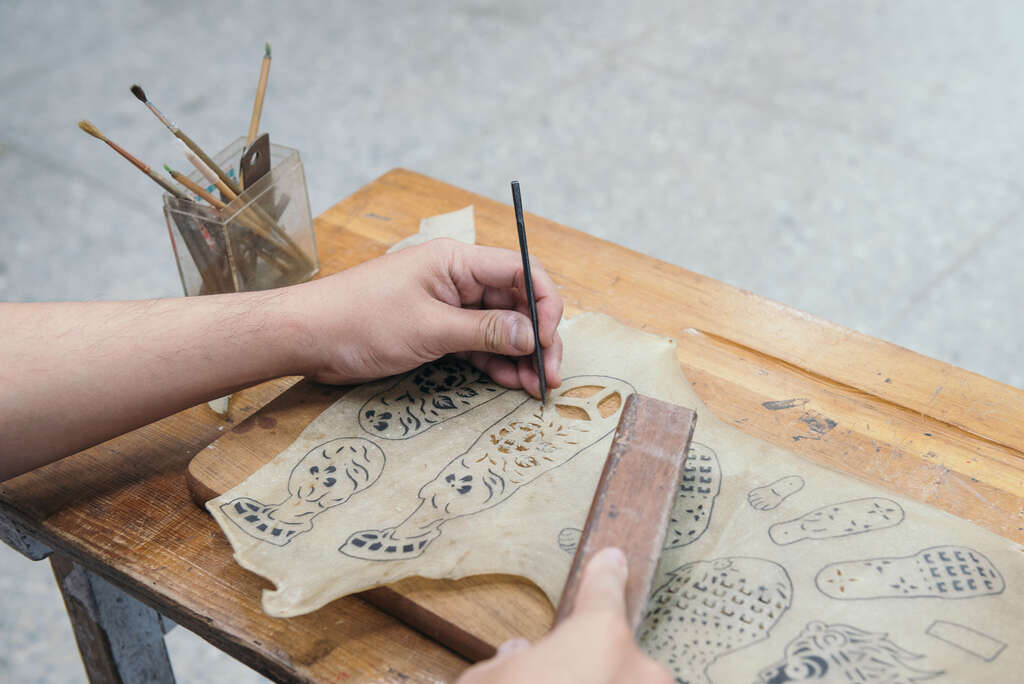 Traditionally, storylines were taken from Chinese historical epics, mythology, popular romances, and other folktales. Some scholars argue that the highly stylized gestures, body expression, and choreography of actors in Chinese opera are in fact imitations of elements seen in Chinese puppetry — not the reverse as many assume. “Remember,” says Hsiao, “that puppetry is the older form.” 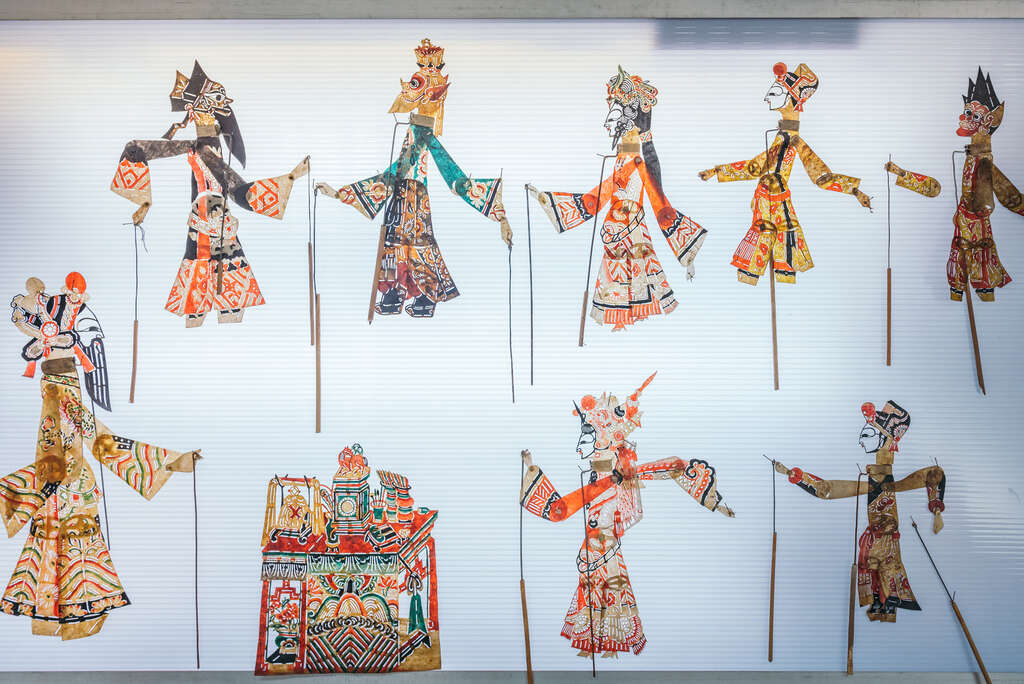 ▲Traditional figures are made of leather, and very time consuming to create due to their meticulous craftsmanship as each of them can have over 10 components.

Originally performed in informal settings, “in the 1800s, there was a move to perform in large formal theaters, because demand was great. You could say these were the first ‘movies’ in Taiwan. However, during the Japanese era, great difficulties were faced.” At the beginning of this period there were about 100 troupes, concentrated in the south, especially in today’s Kaohsiung/Pingtung (屏東) region. However, during this period, “Performances had to be in Japanese, not local dialect, which most middle-aged and older people could not follow, and audiences dwindled. Then black-and-white films came to the theaters, followed by color films and TV, and in more recent decades a media explosion.” According to Hsiao, today there are just two troupes in Kaohsiung, and his in the north. BATTLES FACED, BATTLES WON
“The biggest battle we have faced is that the people of the north have little if any memory of shadow puppet theater, and the younger generation none at all. So, we’ve had to win our audience individual by individual. Our father decided the best path was to build loyal followers among fresh-eyed youth, by adding new modern elements.” says Hsiao. 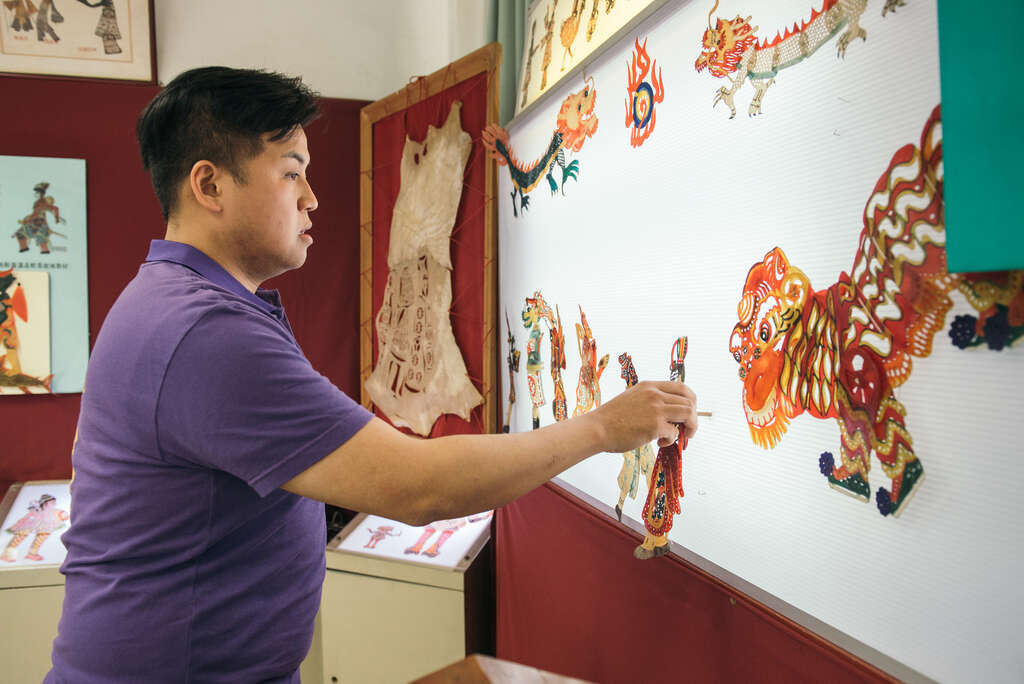 For example, performances are interactive, with the characters engaging directly with the audience. “We’ll do things like ask the kids if they want a certain character saved, allowing them to influence an unfolding storyline,” he says. As well, in some shows live actors perform in front of the stage, interacting with both puppets and audience members.

“Our father also added to the traditional repertoire of classical Chinese tales, with a penchant for bringing in Western children’s stories that modern youngsters are familiar with, such as ‘Little Red Riding Hood’, ‘The Three Little Pigs’, and ‘The Wolf and the Seven Little Goats.’ The appeal of these is their storylines are relatively plain in comparison to those of many classic Chinese tales, and they contain clearer division of ‘evil’ and ‘pure/innocent/good’ characters.“ Such tales, he adds, also make it easier when encouraging youngsters to create their own stories. 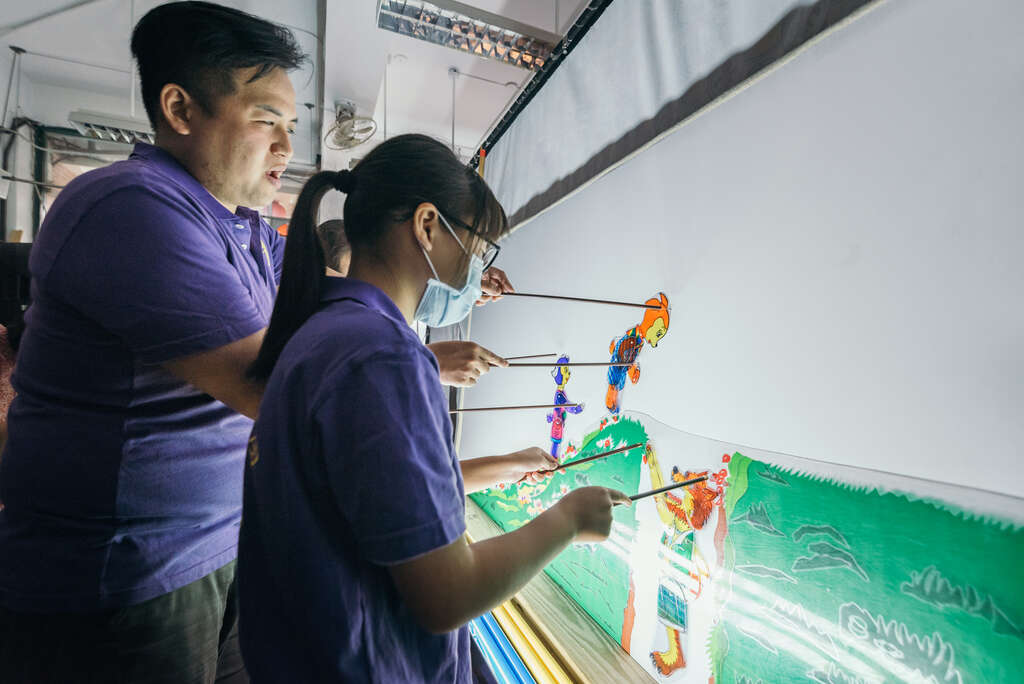 ▲Shadow Legends Drama Group merges the culture of shadow puppetry with education. Now, students are able to see exhibitions at school, and can even learn and perform themselves.

The decision was also made to perform in Mandarin Chinese rather than the customary Taiwanese Hokkien (a local dialect), to maximize the potential audience. “Today all youngsters are taught in Mandarin Chinese and have good Mandarin skills, so this approach is all-inclusive.”

Another initial difficulty was finding people with the interest and dedication to join the troupe and learn the necessary skills, from the making of puppets to live-performance readiness. “In the beginning we had adults, middle aged and older, who had an interest, usually because of childhood familiarity. But they generally had too many other responsibilities or distractions to put in the time required.” His father’s idea was to first capture youngsters’ interest through DIY education; those who developed a keen interest might thereafter stick with the training program for the troupe.

The troupe moved into its current base in the Dali Elementary School (大理國民小學) in Wanhua District in 2006. This was on the invitation of the principal, who supported their mission in preserving traditional folk arts. Two former classrooms serve as the workshop and theater/exhibition hall, respectively. Plays are put on for the students, the facilities have become an intimate part of the students’ lives, and the happy result is that a number of former students have maintained a solid interest in the art form and have joined the troupe. 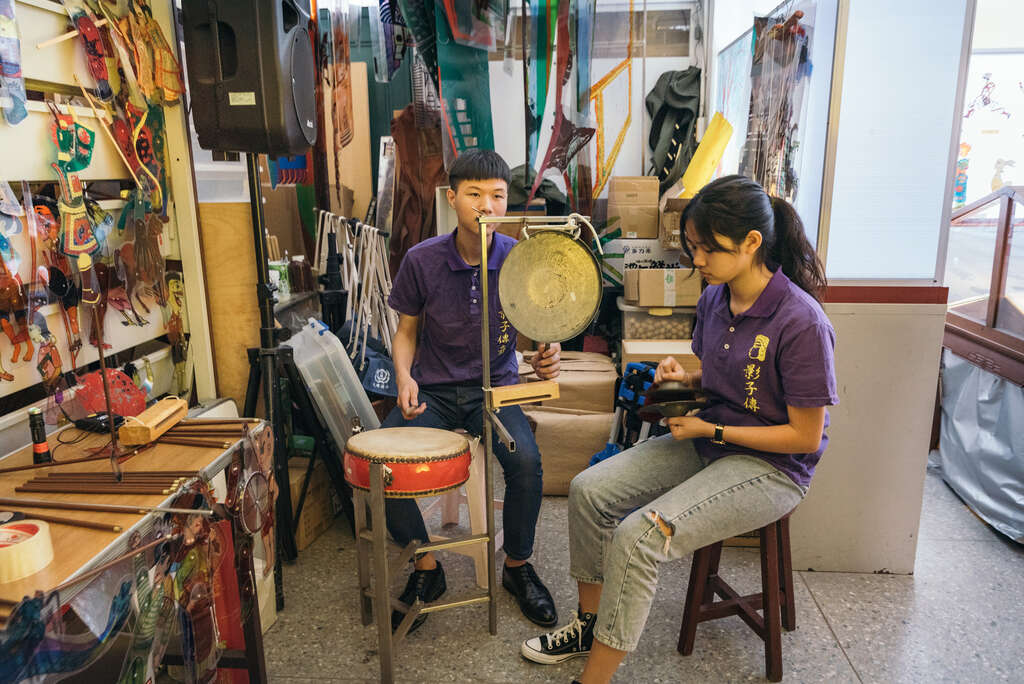 ▲Shadow Legends Drama Group merges the culture of shadow puppetry with education. Now, students are able to see exhibitions at school, and can even learn and perform themselves.

FAMILY FUN LEARNING RECOMMENDATIONS
If in Taipei and looking to learn more about shadow puppetry, Hsiao Meng-tung advises that his troupe’s Dali Elementary School base is the place to go. “Our Saturday DIY experience sessions for groups are popular,” he says. “Each lasts 2.5 hours, for groups up to 20. We teach you the background and basic performance skills, you get to craft your own plastic puppet character, and then you can create and perform your own little play. You also get to take your FAMILY FUN LEARNING RECOMMENDATIONS DIY puppets home.” Local tour operators will often make these sessions part of their itinerary, he says, and have brought foreign tourists. Advance bookings are required, and Hsiao advises that it is crucial to have a person who can provide translation from Mandarin. 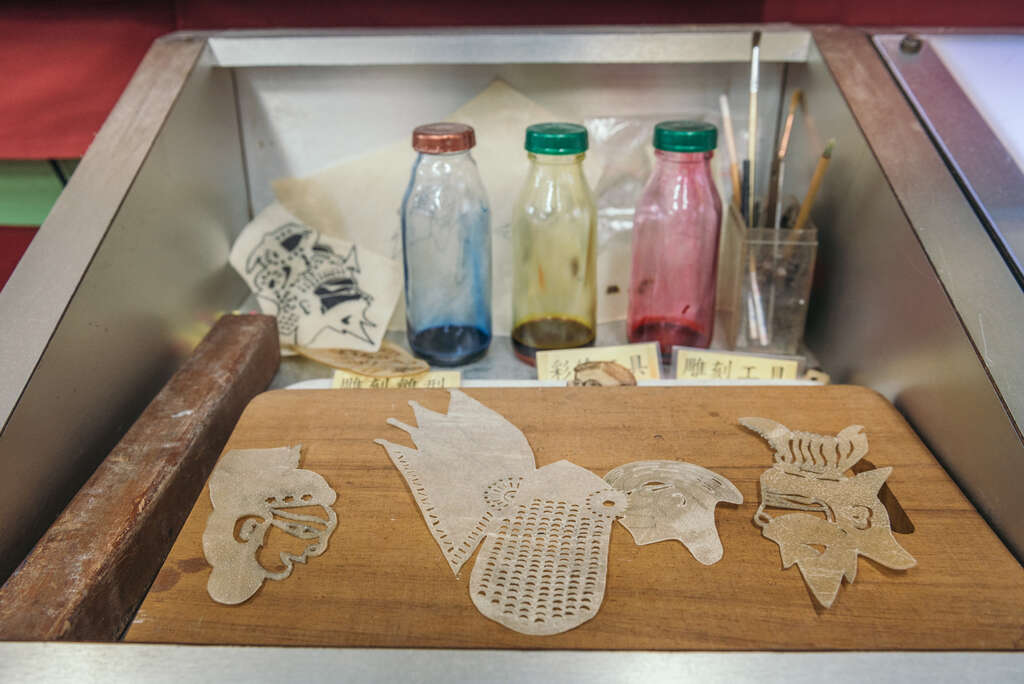 He also encourages people to come see their performances in other venues, especially during the annual Wenshan Art Festival (文山藝術季) in Wenshan District, which runs from October through December. The Shadow Legends shows staged during this festival feature live actors. “Those interested in traditional glove puppetry should visit the Taiyuan Asian Puppet Theatre Museum (台原亞洲偶戲博物館), in the old Dadaocheng (大稻埕) neighborhood,” Hsiao goes on. “The director is a Dutchman, Robin Ruizendaal. This is a good place for family outings, and there are two resident puppet-theater companies.” The museum’s superb collection of puppetry artifacts surpasses 8,000 pieces. In addition to occasional puppetry-themed exhibitions, there are glove puppet-making sessions, puppet-master shows, family glove puppet theater presentations, and classes in traditional puppetry skills. These activities primarily take place on weekends.

TaipeiEYE (臺北戲棚) is a facility dedicated to presenting traditional Chinese/Taiwanese stage arts to tourists, with shows presented four nights a week. Each includes sample performances of Chinese opera, folk arts/acrobatics, folk music, indigenous dance, and folk musical theater, and the program is changed every six to eight weeks. Subtitles are provided in Chinese, English, Japanese, and Korean. Off-stage experiences are also available to visitors, such as watching and learning about opera-actor costume and make-up preparation, trying on costumes, photo ops with performers, and a Taiwan glove-puppet theater display. “Shadow puppet theater has been included in the program there, too.” says Hsiao. 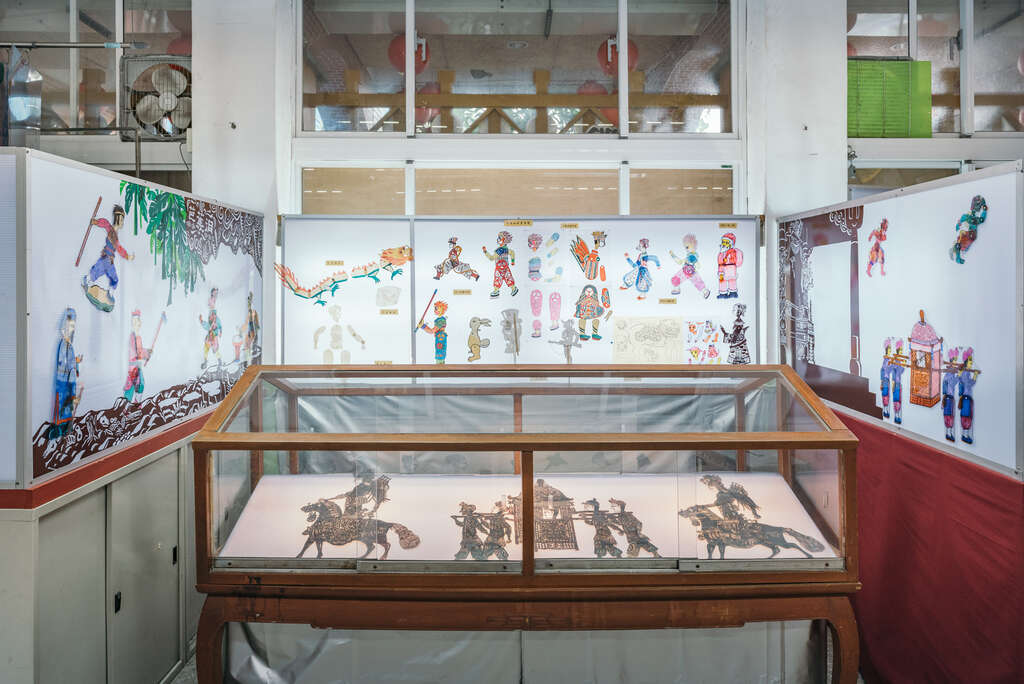 ​​​​​​​
Besides TaipeiEYE, you may find the large Puppetry Art Center of Taipei (台北偶戲館) on the city’s east side. It is divided into three main display areas, focused on glove-puppet, marionette, and shadow-puppet theater. Visitors are given the chance to handle and operate puppets in all three. Also on offer are special-theme exhibits, live theatrical performances, interactive games, and DIY puppet-making classes for groups, with advance booking required.

Although the Hsiao brothers were not born puppeteers, it never stopped them from moving forward with their passion for shadow puppetry to fulfill their father’s dream. They will continue their progress, step by step, and hopefully gain the opportunity to hold performances in more countries in the future in order to spread this endangered cultural tradition far and wide.

Taiyuan Asian Puppet Theatre Museum 台原亞洲偶戲博物館
■Currently closed due to relocation. Estimated to reopen in 2021 on Dihua street in Dadaocheng. 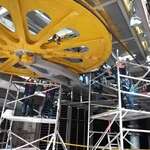 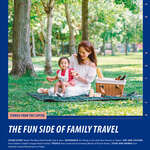