The Old and New of Shilin

Nestled between the peaks of Yangmingshan National Park and the winding Tamsui River (淡水河), Shilin (士林) has a history that goes back as far as the Qing Dynasty (清朝, 1636 A.D. – 1912 A.D.). Since the 1700s, it has been an important northern suburb of Taipei, a dining and cultural hub home to ancient temples and significant monuments.

Former president Chiang Kai-shek (蔣介石) and his fellow Nationalists also favored the area. Nearby they erected two of Taiwan's most famous landmarks — the Grand Hotel (圓山大飯店) and the National Palace Museum (國立故宮博物院). In Shilin proper, Chiang Kai-shek built his residence and lived here with his wife Soong Mei-ling (宋美齡) for 26 years.

In more recent years it developed into a fervent tourist hub with a world-famous night market. A huge number of shops, stalls, and carts — some with decades-long history — serve up traditional Taiwanese staples and modern regional cuisine, from shuijianbao (水煎包, pan-fried stuffed buns) and bubble tea (珍珠奶茶) to craft beer and Vietnamese noodle soup.

But it is not just foodies heading to Shilin. Culture connoisseurs also flock to the area. Opened in 2017, Taiwan Traditional Theatre Center (台灣戲曲中心) hosts operas and other performances with histories dating back hundreds of years. The humongous Taipei Performing Arts Center (台北表演藝術中心), expected to open in 2022, is the new cultural icon of the area. 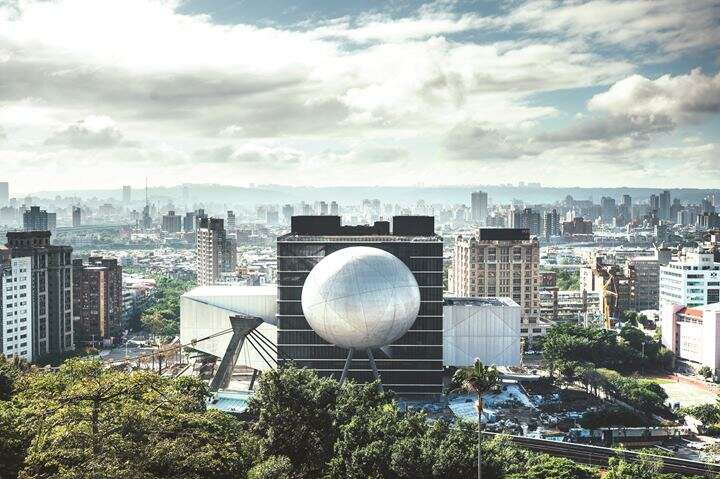 Both venues have turned heads with their striking and innovative design. They stand next to and around the landmarks of ancient culture and recent history and the sprawling night market. This is Shilin, a district with one foot in the past and one foot in the future but firmly grounded in the two main joys of life, entertainment and food.

Little Eats
Shilin Night Market (士林夜市) is Taipei's worst-kept culinary secret. Come nightfall, people from Taiwan and beyond flock to the streets of Shilin to binge on shopping, eating, and gaming. High schoolers and university students meet their pals or sweethearts after they get out of class. Taiwanese aunties and uncles meet with old friends, returning to shops and stalls they have visited for decades. Tourists make a beeline from the airport, keen to get an authentic taste of Taiwan's famous xiaochi (小吃) or little eats, the array of snacks that line the streets. In fact, people in Hong Kong and other nearby cities have been known to fly in especially for a food tour at Shilin Night Market. 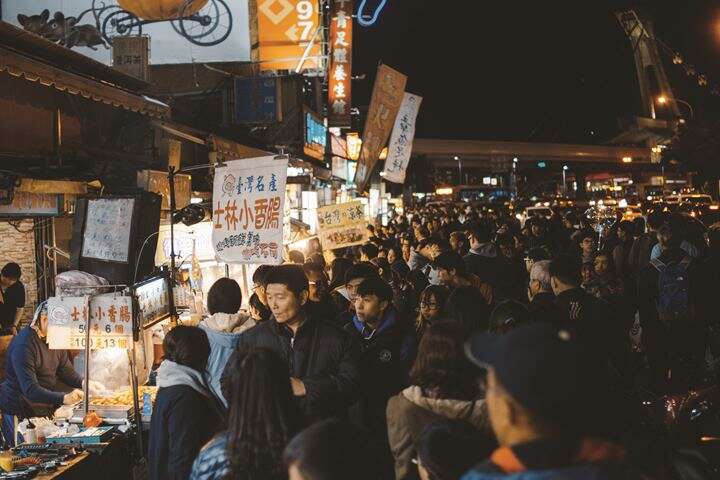 ▲Shilin Night Market is the place to go when locals and tourists alike want to enjoy some great food or just feel the big city vibes. (Photo/Max Oh)

Having been revamped in 2011, the new arrangement of Shilin Night Market popped the famous stalls into a food court underground, reserving street level for shopping and gaming. This is your go-to one-stop-shop for Taiwanese street food staples such as fried chicken, stinky tofu, squid balls, and pan-fried stuffed buns. More shops, restaurants, stalls and other eateries crowd the streets to the north of the new building. Pedestrian-friendly streets sit next to the odd ancient temple, with Japanese colonial-era buildings and the old market buildings in the mix as well, a taste of Taiwan and the region. It has long been the frying, steaming, bubbling, barbecuing, beating heart of Shilin.

Bringing the Capital to Life with Running Water
One of only a handful of Shinto shrines left over from the Japanese colonial period, the Yuanshan Water Shrine (圓山水神社) is a fascinating yet often overlooked landmark. It tells a story of Taiwan's colonial past and Shilin's development throughout the 1900s.

Just a stone's throw from MRT Jiantan Station (捷運劍潭站), the secluded water shrine sits among beautiful hedge-lined gardens and a large lawn in Jiantanshan (劍潭山, Mt. Jiantan). It was once one of more than 200 Shinto shrines built by the Japanese when they ruled Taiwan from 1895 to 1945. Back then, one of the largest colonial projects was bringing running water to the burgeoning population of the capital. Around 1930, the Japanese began construction of a waterway system to funnel the abundance of rain on Yangmingshan down to a reservoir in Shilin. 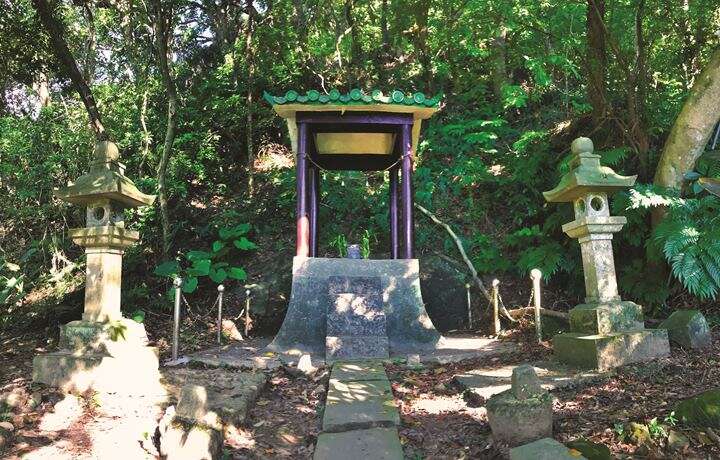 ▲Yuanshan Water Shrine marks the modern infrastructure left behind by the Japanese in Taiwan.

The story goes that several of the engineers of the mega-project met with an accident and passed away during construction. Coworkers at the reservoir raised funds in their honor to build a shrine not only to the Shinto water god, but also as a memorial to their fallen colleagues.

While most Shinto shrines were later removed or converted to more "Chinese" shrines, the Yuanshan Water Shrine escaped this fate thanks to the protection of the Yangming Branch of the Taiwan Water Corporation (自來水公司事業處陽明分處), which took over the site and revamped the shrine.

Stone lanterns flag a path up to a Chinese-style pavilion which now hosts the main shrine, a small wooden house that is home to the Shinto water god. The area is well-kept but still feels semi-forgotten. Aside from the main shrine you'll find a purification fountain, and some stone lions. If you're feeling adventurous (and have sturdy shoes on), head up one of the mountain paths to discover relics of the old reservoir, which was decommissioned and filled in the late 20th century.

Work and Play
Just as the Japanese developed and expanded Taiwan's infrastructure in Shilin, they also built other public buildings. The area's Bazhilan Public School (八芝蘭公學校) was the first educational institute established by the Japanese in Taiwan. An original wooden structure was later replaced by a brick school building in 1914, which still stands today. The facility was renamed Shilin Public School (士林公學校) in 1921, and finally became part of Shilin Elementary School (士林國小) as an important part of Shilin's regional history. The original arched windows and doors popular in the early 20th century remain intact on the old lecture hall, as does a grand entrance with traditional gateposts and a signboard which still reads Bazhilan Public School. Nowadays, it holds the school's historical artefacts, designated as important antiquities by the Ministry of Culture (文化部) in 2017. 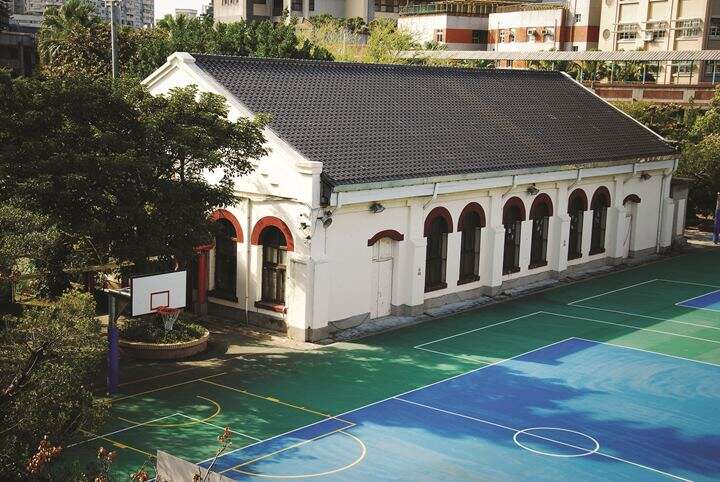 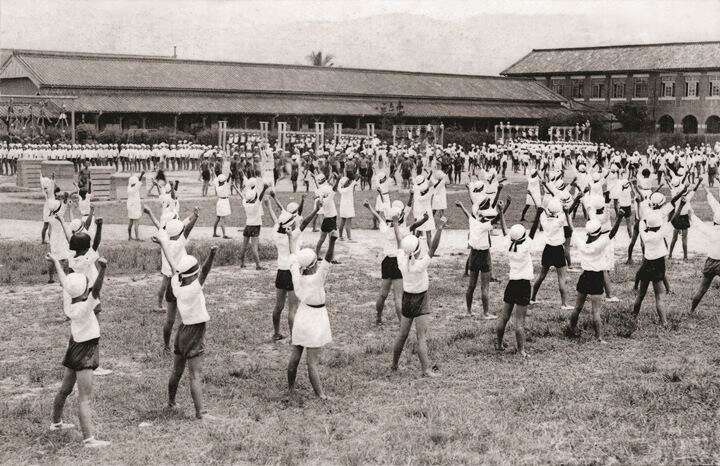 ▲Pupils would exercise together on campus back in the times when the nation was under the Japanese education system. (Photo/Shilin Elementary School)

It is not all work and no play in Shilin, however. The nearby Taipei Children's Amusement Park (台北市兒童新樂園) is the Disneyland of many young Taipei children's dreams. It is in some ways both the oldest and the newest amusement park in Taiwan. The Japanese built a children's amusement park in the Yuanshan (圓山) area in 1937. It changed hands a couple of times before the city government opened the latest reiteration in 2014. Families gather here all year round to enjoy some of the classic fairground rides, like the carousel, Ferris wheel, spinning tea cups and bumper cars.

▲With its many different facilities, Taipei Children's Amusement Park provides a fun and relaxing place for both kids and adults.

Art Hub
Shilin's two most important modern cultural buildings are the Taiwan Traditional Theatre Center and Taipei Performing Arts Center. Established in 2016, the Taiwan Traditional Theatre Center is comprised of three striking, angular buildings with colorful straight lines reaching toward the sky. The two squat and one larger building are apparently inspired by two chairs at a table, which are the basic performing tools placed on the stage during performances of traditional Chinese theatre. They contain theaters, performance halls, and are the home of the Taiwan Music Institute (台灣音樂 館), National Chinese Orchestra Taiwan (台灣國樂團), and GuoGuang Opera Company (國光劇團). People regularly come here from around the city to indulge in some Taiwanese opera or other traditional arts and music from Taiwan and around the globe. It also hosts the Golden Melody Awards for Traditional Arts and Music (傳藝金曲獎), which aims to mark the vitality of traditional arts. 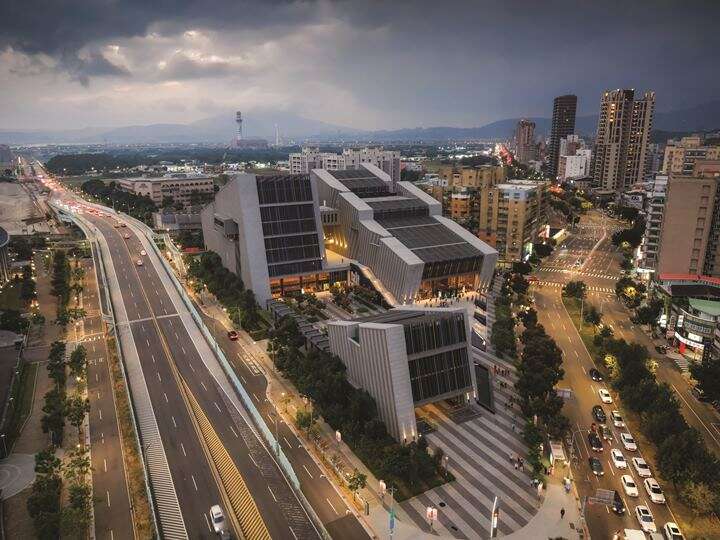 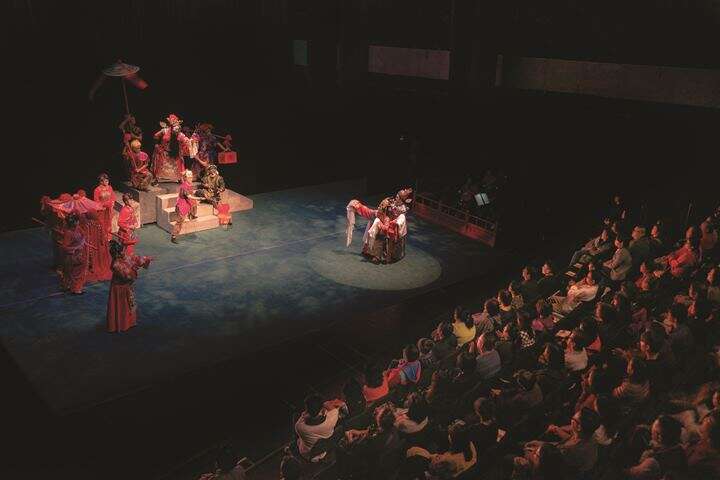 The Taipei Performing Arts Center is certainly a head-turner, with its space-age glass cube and a giant globe sphere to one side and silver boxes protruding from two of the others. It is radical not just in how it looks, but how it works. The seats for the various auditoriums jut out from the main building, facing a stage area in the center of the large cube. This flexibility allows for endless possibilities for dynamic and sophisticated performances that are expected to bring performers from around the world.

Mansion of the Former President
Shilin Residence, which was a horticultural experimentation center under Japanese occupation, was turned into a residence for Chiang Kai-shek and his wife after their retreat to Taiwan. They lived very comfortably here among the orchid and rose gardens during the time when the island was ruled under martial law. 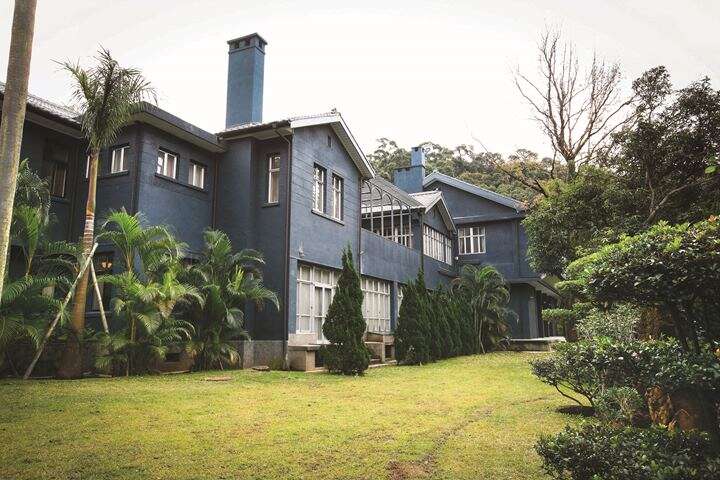 ▲The Western-style main building of the Shilin Residence was once a horticultural research center. (Photo/Chung Cheng Foundation)

The veil was lifted in 1996 when the gardens were opened to the public. It is a wonderful place to wander among the traditional Chinese and Western-style gardens. Flower-lovers gather here for tulip and rose exhibitions in the spring and a chrysanthemum exhibition in autumn. In 2011 the main residence, including the living room, dining room and bedrooms, also opened to the public, allowing visitors to catch a glimpse of the living space of the former leader. 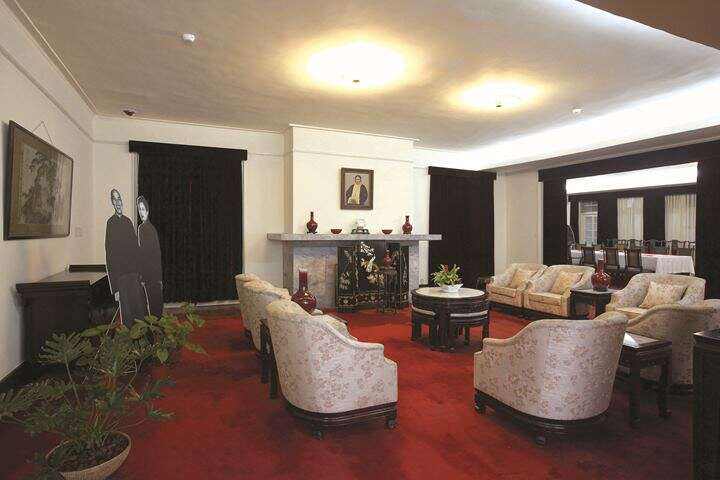 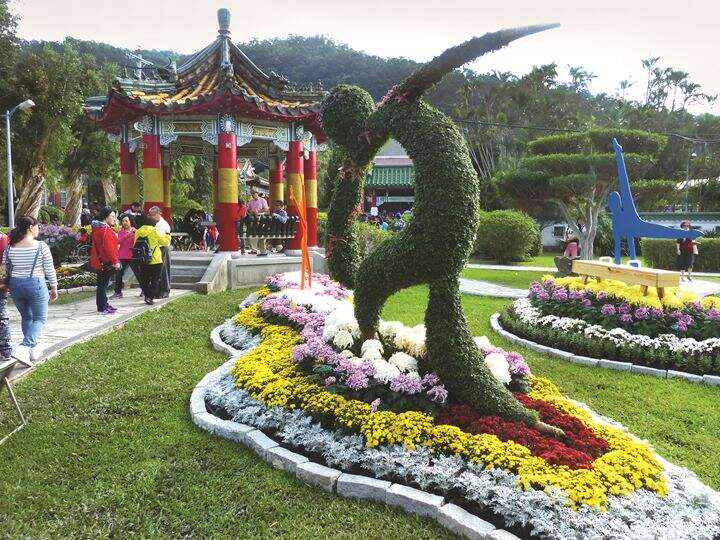 ▲The once mysterious Shilin Residence is now open to the public, and has become a popular spot for locals and tourists. (Photo/Top: Chung Cheng Foundation; Bottom: Yengping)

Locals and tourists alike now gather here to while away an afternoon. It is a symbol of Taiwan's transition from authoritarianism to democracy and another example of how Shilin modernizes while preserving its history. 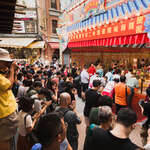 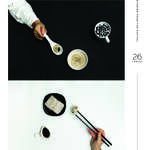 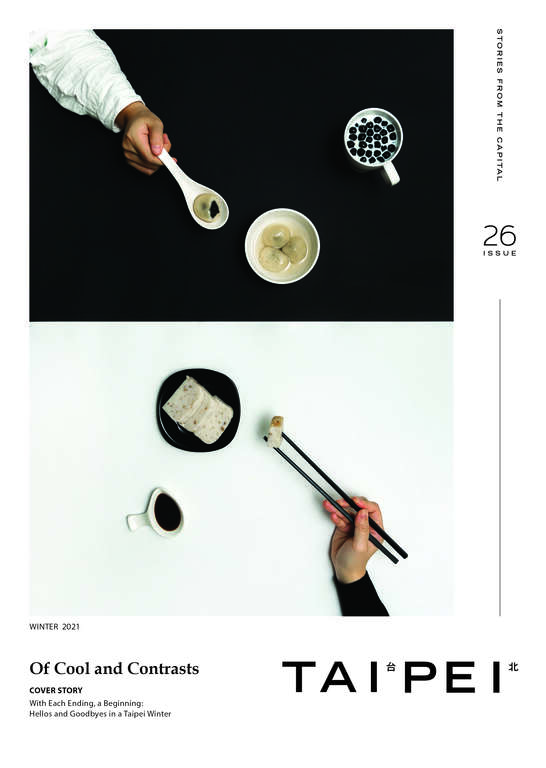