Food preservation and storage are techniques developed by humans in response to their own basic survival needs. As such, over the course of human history, people have developed ways to salt and dehydrate fresh vegetables, fish, and meat to extend their shelf life. Classic examples include Korean kimchi, Swedish pickled fish (Surströmming), and Spanish Iberico ham. In different geographical environments, these food preservation customs intertwined with social culture, and evolved into food with local characteristics over time.

In Taipei, Taiwanese-style bacon, Hong Kong-style sausage, and Chinese Jinhua ham (金華火腿) are traditional winter delicacies that are indispensable during the Lunar New Year, and are familiar to locals as cured meat. With more diverse culinary influences coming to the city in recent years, we now have the opportunity to try out European-style dry-aged meat dishes. 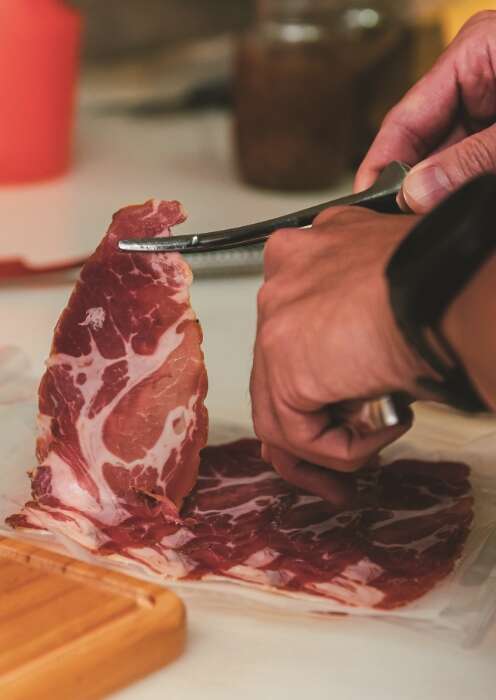 ▲Cured meat made from local ingredients is bringing more innovation to dining experiences in Taipei.

The Dry-Curing Process
"All types of cured meat around the world are essentially made by salting to remove moisture and preserve the meat for longer," explains Mickey Yeh (葉星笛), founder of My Salumi, adding that there are generally three types of salted cured meat. The first is completely air-dried, which is how the highly popular Spanish Iberico ham, Italian Parma ham, and Chinese Jinhua ham are made. The second is low-temperature smoking, whereby the meat is smoked for more than 10 hours at 50 to 55 degrees Celsius. The third common method is marinating the meat, then cooking it at a high temperature, which is how common breakfast ham and bacon are prepared.

In the raw-to-cured process, everything starts from a piece of raw meat. The meat is first air-dried for three to seven days to allow the surface of the meat to dry and more easily absorb the spices before moving on to marination. Marination differs according to the products that are being made. The required salt, spices, or even sugar or alcohol are rubbed on the meat. After two to three weeks of marination, the spices are removed and the meat is dried for another week to ensure that no moisture remains, which could deteriorate the quality of the meat. The dried meat is then wrapped in a cloth and suspended by a rope to enter the final dry-curing process. 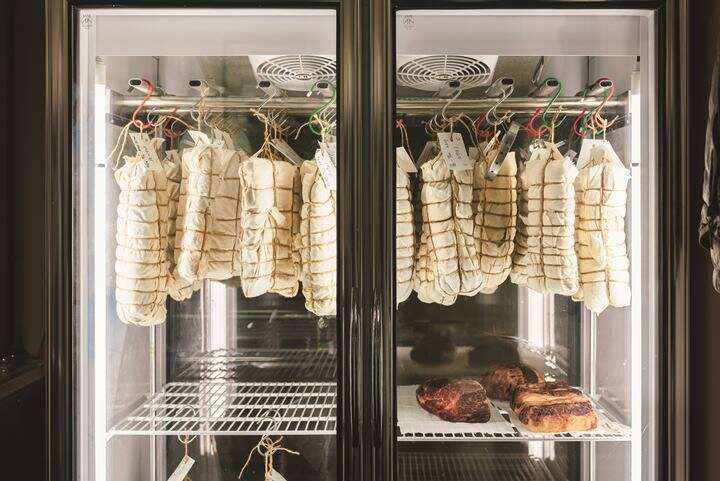 ▲The marinated meat has to stay dry-cured in a controlled environment for months on end.

"There is a basic formula for dry curing. One kilogram of meat usually takes one month to cure," Yeh points out. Because of the limited space they have to work with, they cut the meat procured from local livestock farms into three-kilogram pieces and keep the curing time between three and four months. "The meat is ready to be enjoyed after it has reached a certain stage of curing, but, like wine, the longer it ages, the richer the aroma and taste that is produced," adds Yeh.

Challenges of Meat Curing in Taipei
Transplanting the taste of Europe to Taiwan to create a new taste with locally-raised pork is kind of like rally racing, taking not only time but also strategy. First and foremost, one must overcome the differences in environmental conditions. Taipei's warm and humid climate is vastly different from that of Europe, so it is impossible to let the meat cure naturally in the natural environment. The main reason is that once it comes into contact with moisture, the meat will easily become moldy and spoiled. Therefore, machines must be used to regulate the temperature and humidity of the curing space, greatly increasing the cost of production.

Leslie Liu (劉冠麟), My Salumi co-founder and a former bartender, adds that after selecting the right pork, the ratio of salt and spices must be precisely controlled, because once the meat is being cured, it takes four months to find out if the end result tastes good or not. If the taste is not suitable, the time and effort invested will be completely wasted. He stresses that "Many people think curing meat is like cooking, but it is actually more like doing experiments in a laboratory; the seasoning must be precise, and we must follow a step-by-step process to control the standardization as much as possible." 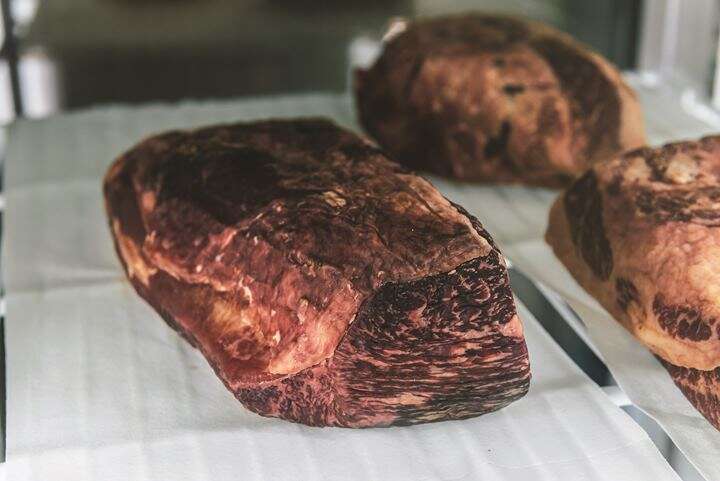 ▲As it ages, the meat will develop a unique taste and aroma.

Sourcing the right ingredients is another challenge. Yeh points out that dry-aged meat is not cooked at high temperatures, but only seasoned with salt and spices. This means that the quality of the raw meat is pivotal to the flavor, accounting for 80% of the success or failure of the finished product. In Spain and Italy, raw ham manufacturers work from the farming of pigs to the process of cutting ham to ensure consistent quality.

In Taiwan, although the pork farming industry is solid, conventional livestock farming methods often inject nutritional additives into pigs to make them grow faster. As this can significantly affect the flavor of dry-cured meat, the only choice is procuring pork from pigs raised without artificial additives, which usually is more expensive and rare.

Fortunately, in recent years, consumer awareness in Taiwan has increased and more people are willing to purchase premium pork, which has led to more farms being willing to invest in premium livestock practices, giving cured meat producers more options for high-quality meat. 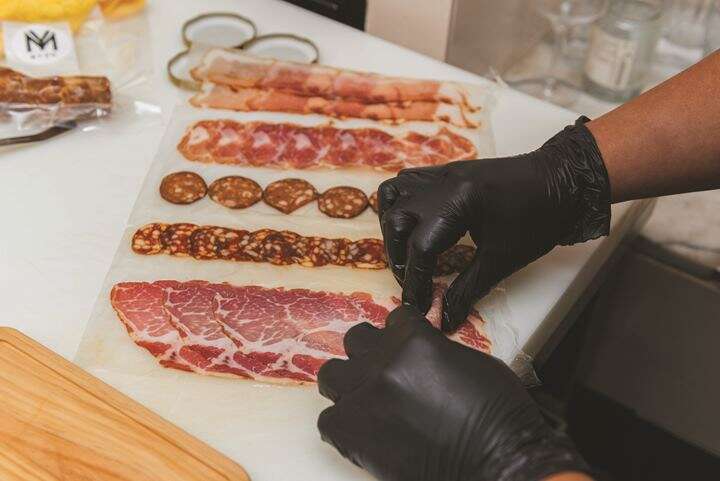 ▲My Salumi has made various cured meats with different parts of pork, creating varied and rich flavors.

Creating the Flavor of Taiwan
Since the flavor of the pork itself is the source of the rich flavor of dry-cured meat, products made from Taiwanese pigs are able to bring out some unique local characteristics and aromas.

"Even when using the same spices, recipes and methods, the taste will be very different if the pork is of different species or even just from different farms," Yeh observes. The fat of the pork is the source of the flavor of the cured meat, so the ratio of the pork fat will affect the taste and texture. For example, the Lotus Pork (蓮貞豚) from Hualien (花蓮) My Salumi often uses is rich in fat, while Choice Pig (究好豬) from Yunlin (雲林) has a unique aroma emanating from the meat itself, which makes a big difference in the cured meat. My Salumi also uses Taiwan's unique Meishan Boar (梅山豬) to make its cured meat products, which has resulted in an exclusive flavor unique to the island.

Regarding the taste of Taiwanese pork, Yeh has this to say: "Taiwanese pork is slightly sweet, with an aroma of fat and no unnecessary impurities. It's really delicious!"

My Salumi blends European spices and adapts them to flavors preferred by Taiwanese people. These are then used with local high-quality pork and cured through different methods such as dry curing and smoking to produce more than 20 different meat products. 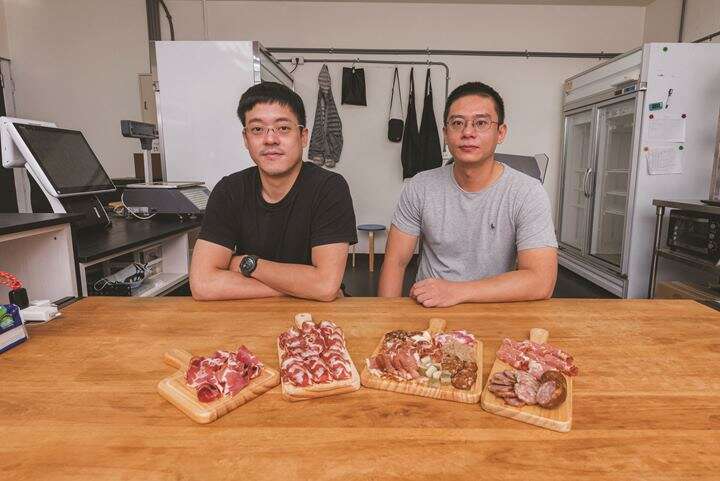 My Salumi's emphasis on using local pig breeds with European recipes is its signature appeal. Dry-cured meat recipes from Europe have come to Taiwan and evolved into local flavors due to the difference in ingredients, becoming a familiar yet fresh taste for foreigners, while also letting locals know that Taiwanese pork can be made into diverse yet profoundly delicious meat products. 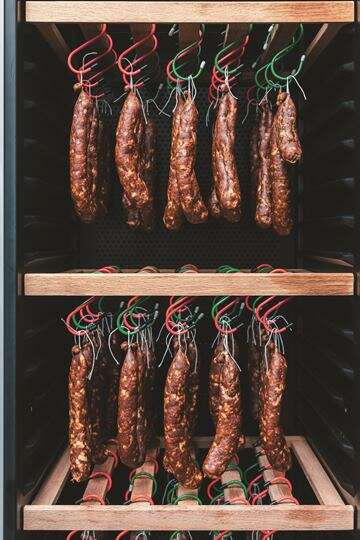 Since the establishment of the brand in 2017, the two founders of My Salumi have overcome many difficulties to create a variety of European-style dry-cured meat products based on Taiwanese pork. They look forward to establishing a firm foothold and continuing to develop unique local flavors using Taiwanese ingredients to add more diversity to the dining table. 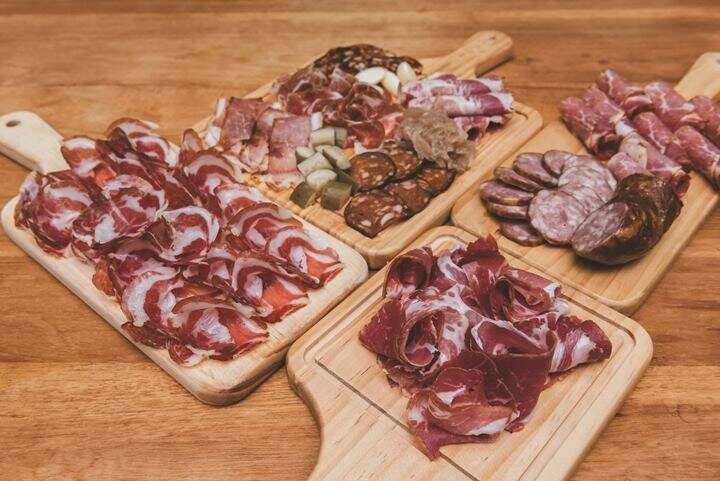 ▲Sliced cured meat is a flavorful appetizer or snack that goes well with many different kinds of beverages.

How to Enjoy:
🍷With Wine
Despite the common belief that red meat should be paired with red wine, Liu, as a former bartender, says they believe dry-cured meat made from Taiwanese pork is actually better suited to white wine, champagne and other refreshing light wines. The taste of the cured meat itself can bring out the subtle flavors in white wine that may not be noticeable on their own, allowing the acidic aromas to shine through.
⭐️DRINK RESPONSIBLY

🍎With Fruit
The classic European way is to serve raw ham with cantaloupe, but Taiwanese melons and cantaloupes are both so sweet that they will directly detract from the flavor of the meat. Instead, pair the meat with Taiwan's abundant wax apples, which are crisp and slightly watery and have a light sweetness that goes perfectly with cured meat. 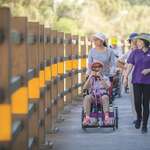 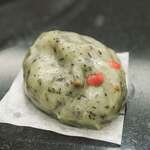