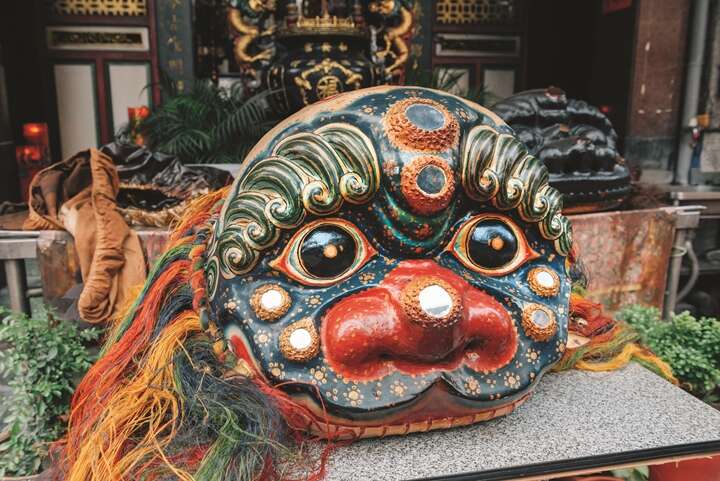 ▲Lions without ears are the main feature of the Golden Lion Group Ta-Long-Tong in Taipei.

The spectacle-filled Baosheng Cultural Festival (保生文化祭) is one of the biggest annual religious events in Taipei, a time of uproarious fireworks and pulsating pomp and pageantry. It is centered on the large and magisterially ornate Dalongdong Baoan Temple (大龍峒保安宮) in Datong District, Taiwan's only temple bestowed with a UNESCO Asia-Pacific Heritage Award for Cultural Heritage Conservation. 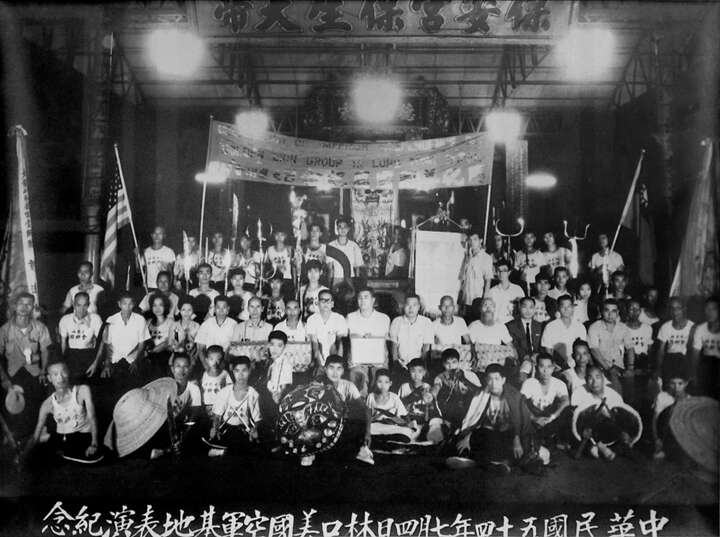 ▲An old photo of the Golden Lion Group that performed for the U.S. army in the 1950s.

One of this festival's most eye-riveting and popular spectacles is the lion dance performances presented by the internationally celebrated Golden Lion Group Ta-Long-Tong (大龍峒金獅團), a troupe born over 200 years ago. It is based in the miniscule He An Temple (和安宮), at the end of old flagstone-paved Hami Street (哈密街), the short street that Baoan Temple anchors, lined with heritage shops. 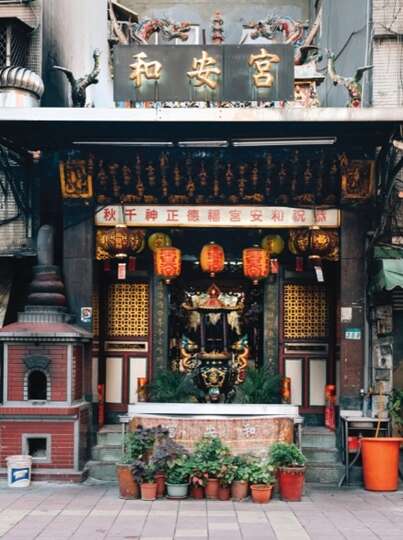 ▲He An Temple, in which the Golden Lion Group is based, is the oldest temple for worshiping the Earth God in the area.

According to an old Chinese aphorism, "In the past every village had a protective lion." This referred to the ubiquitous lion-dance troupes that protected the home turf of their members. Their fierce lions frightened off evildoers from both this world and the netherworld. Troupe members, overwhelmingly members of the local militia, melded martial arts skills into their performances.

The Golden Lion Group has been protecting Taipei's Dalongdong (大龍峒) community since its days as a flourishing town in Chinese imperial times. Among the troupe's many laurels has been the bestowal of a Taipei Master of Traditional Arts Award (台北市傳統藝術藝師獎) by the city government, recognizing the group as a priceless cultural asset. 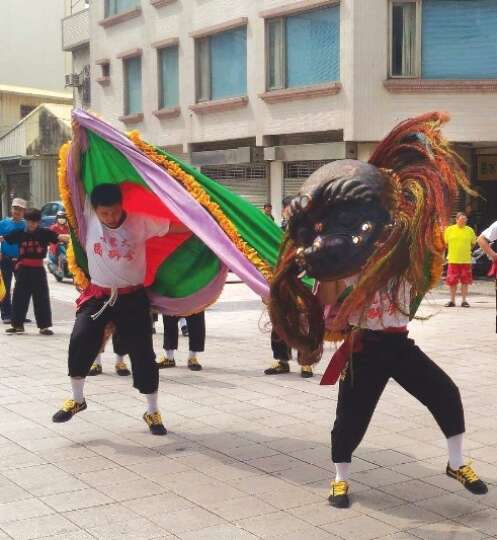 Protecting and Passing On a Noble Heritage
Master Lee (李世澤) is the general director of the non-profit foundation that officially oversees the troupe. His clan has been intimately involved for multiple generations. "Our lion dance troupe was the first formed in Taiwan history," he states, "and we are one of the last remaining in Taipei passing on lion dance cultural traditions from generation to generation."

The troupe is referred to as the "old lion ancestor (老獅祖)" among lion dance troupes in northern Taiwan, having passed on their expertise to many other troupes. Its exalted status is evidenced in its leading position in temple festivals and other major traditional culture celebrations.

Today, Golden Lion is passing on lion dance heritage in three primary ways. First, says Lee, is simply through its efforts to survive and thrive. As with other traditional arts and crafts in developed countries around the globe, the younger generation is interested in more modern pursuits. Recruitment of new blood is a challenge, and under Lee's leadership the troupe has taken decisive steps toward this, while also having begun to proactively participate in domestic and international events. Second, the troupe has transformed its performances into educational sessions to provide more foundational knowledge to today's public, which may have a limited understanding of what they are watching. As performances unfold, all is explained using loudspeakers. Third, the troupe cooperates with other troupes, directly passing on its knowledge. 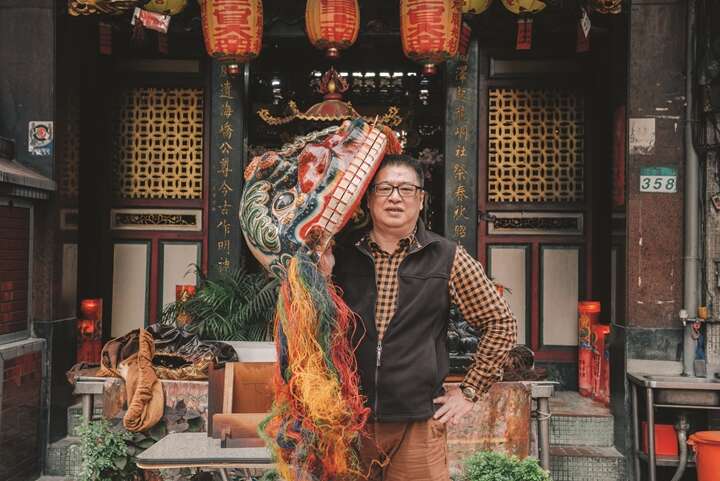 ▲Lee has dedicated his life to proactively promoting his family legacy of the lion dance tradition.

A key element in the troupe's cultural heritage preservation and dissemination mission is its entry into formal cooperation with Chinese Culture University's Department of Combat Sports and Chinese Martial Arts (中國文化大學技擊運動暨國術學系). The department's professional instructors and martial arts talent have helped the troupe hone and further develop its formation and martial arts system, and helped develop a systematized training regime. In turn, all troupe knowledge has been passed on to the school, meaning there is now a formal base from which to disseminate its cultural traditions and techniques to talent around the island and further abroad.

Lee now contributes as a lecturer at the university, and the department's talent will fill out the troupe's ranks when staging longer performances, which require larger numbers. A full Golden Lion presentation can last up to 90 minutes, he says, but nowadays many event organizers ask for "highlight" routines — i.e., the most action-packed segments — lasting 20 minutes or so. The minimum number of performers will be 30, Golden Lion can muster around 70, and for the largest demonstrations the university will contribute about 30.

Golden Lion Group Special Performance Features
The troupe is famed for its "earless lions (無耳獅)." Their lions, says Lee, have been earless since the late 1800s. At the time, two lion dance masters from China's Hunan province, visiting Dalongdong, professed the troupe's martial arts routines to be too action-oriented and acrobatic, lacking the aesthetics and artistry of the Hunan form. They thereafter taught these to the troupe, but left for China after the Japanese took over Taiwan in 1895. There was factional turbulence in the community afterward about whether to reject or accept the new Dalongdong-Hunan synthesis, and to quell the mutterings the troupe leader symbolically cut off all their lions' ears, demonstrating he wanted no more murmurings disturbing them or the community peace. The then-new synthesis of acrobatics and artistry today remains at the core of the troupe's repertoire.

Lion dance methods are primarily divided according to how the lion's head is positioned. There are three categories: high head/high road lion (上路獅), middle, and low. The Dalongdong troupe is one just a few in Taiwan to use the "high head" technique, which it does at all times. Most Taiwan troupes use the "low head" method, simply because it's easier. Here's why. The "high head" technique means the heavy lion's head is held aloft, with the performer's arms extended, which is exhausting and makes it difficult to carry out the martial arts and dance movements properly. Symbolically, this leaves the lion "vulnerable in defense," says Lee. "Thus, your performers must be stronger and practice longer to perfect the routines. The 'high head' method also demonstrates the pride of your troupe's lions, which never lower their head before anyone no matter how their heads move while they jump around."

▲The intricate details and skill of making the lion heads carry with them the history and beliefs of the area.

Another type of skill that sets the Golden Lion troupe apart is insistence that its members learn how to craft their own lion heads. Other troupes will delegate this to the island's dwindling corps of craft masters. Beyond the aforementioned lack of ears, Golden Lion heads also have a number of other unique features. "We place seven small shiny mirrors on our lions, symbolizing the Seven Stars of the Northern Big Dipper (北斗七星)," says Lee. Demons and other netherworld ne'er-do-wells are also frightened off upon seeing their reflections. Their lions' bright red nose is the mark of a "lion king(獅王)." In the north, it is recognized that only this troupe has this status. 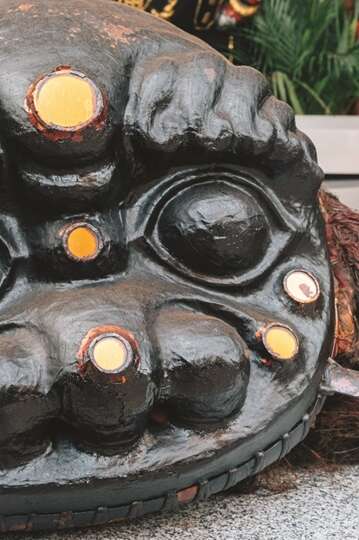 ▲The shining mirrors inserted on the lion's head represent the Northern Big Dipper, and are believed to scare away demons and evildoers.

Lee poses a test for those fortunate enough to take in the troupe live on more than occasion. Can you spot the most obvious difference between the lion heads seen on the troupe's home turf and when performing on away turf? The answer is the mouth. The troupe has full sets of home/away lion heads. The home lions feature mouths with two lines of even teeth and even lips, indicating calm and friendliness. The away lions have lips pursed under the nose, indicating ferociousness. It is not that "away turf" is considered enemy territory, says Lee. This is simply a demonstration of the Dalongdong lions' territorial dominance.

Where to See the Troupe Perform
Golden Lion has had an intimate relationship with Dalongdong Baoan Temple that stretches well back into imperial times. Since he became the troupe's head in 2007, Lee states, Baoan Temple has provided new performance equipage as well as financial support, and when needed opened its grounds for Golden Lion training.

During the annual Baosheng Cultural Festival, the troupe performs a number of times. Among the thrilling highlight events are the Baosheng Dadi Deities Parade (保生大帝聖誕遶境), featuring deity palanquins and many performance troupes. This is an inspection procession around Dalongdong, with the deities bringing the community peace and blessings. The Golden Lion Group heads this small army, driving off all baleful influences.

For the Fire-Walking Ritual (過火儀式), the troupe first "clears the field (淨場)" before the temple to drive away dark-world evildoers, and is then the first group to conquer a long path of burning coals while wielding lion heads, weapons, and other paraphernalia.

Beyond the Baoan Temple extravaganza, the troupe also takes part in the grand inspection processions for two other temple festivals, staged by Bangka Qingshan Temple (艋舺青山宮) and Taipei Xia-Hai City God Temple (台北霞海城隍廟), which make up the "Taipei Three Great Temple Festivals." It also performs at other temple festivals around the island and at major government-organized cultural celebrations.

►Check out the performances of the Golden Lion Group Ta-Long-Tong by scanning the QR Code or clicking here. 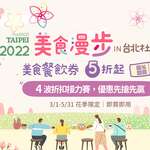 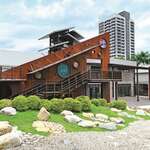