A Carpenter's Love of Heritage Houses in Taipei

Taipei is a city of many professions, where craftsmen and women from all walks of life work tirelessly to keep the city running. In the concrete jungle of Taipei lives a designer who actually started his career as a carpenter. In an old brick house that he personally remodeled, he promotes the warmth and romance of carpentry, while also encapsulating the handmade spirit of the many old houses tucked away in various corners of Taipei, which in turn embody local history and culture.

Opening a Dialogue Between White-Collar and Blue-Collar
Ming-chien Chiang (江鳴謙), dressed to the nines, leads us into the small paradise he has created. Smooth Worksite (什木工地) is a carpentry classroom located in an old red brick house on Zhongnan Street (中南街) in Nangang District, where various machines, wood and semi-finished products are neatly arranged. "I grew up watching carpenters go about their work and idolized them, so I always wanted to try it when I grew up!" recalls Chiang. 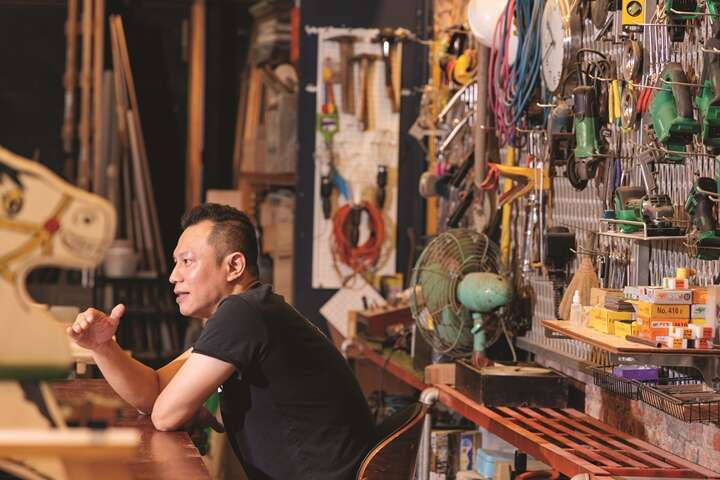 ▲Though he might look tough on the outside, Chiang shows his true gentle nature when talking about his beloved old houses and carpentry.

With his desire to work as a carpenter, Chiang decided to start as an apprentice and follow the traditional path of training as a craftsman, moving step by step to become a master, a general contractor, and finally a designer.

Later on, Chiang worked as a freelance designer, and occasionally brought interested customers to join him in his work. Inadvertently discovering he was good at teaching, he was encouraged to open a carpentry classroom. While interacting with the public, he realized that many people had no idea about the profession and skills of craftsmen, creating a gap between them.

"I wanted to bridge the gap between the 'people who do the work' and the 'people who commission the work!'" Chiang recollects, so he invited a variety of frontline craftsmen, including cement makers, ironworkers, and fragmented ceramic artisans, to give lectures, share their work, and exchange knowledge about craftsmanship. 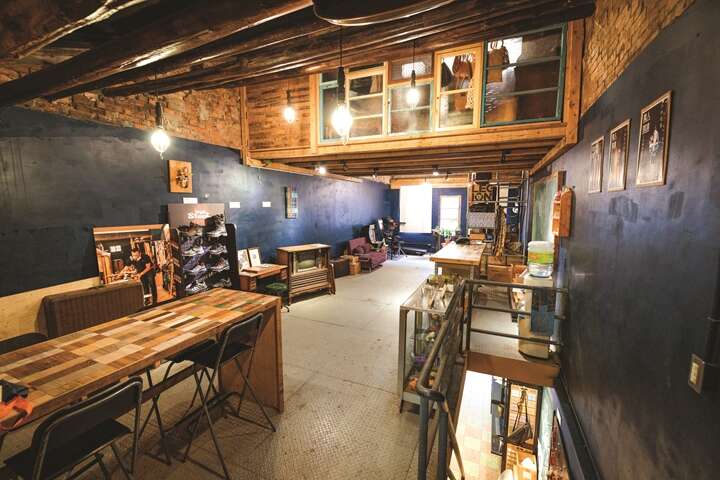 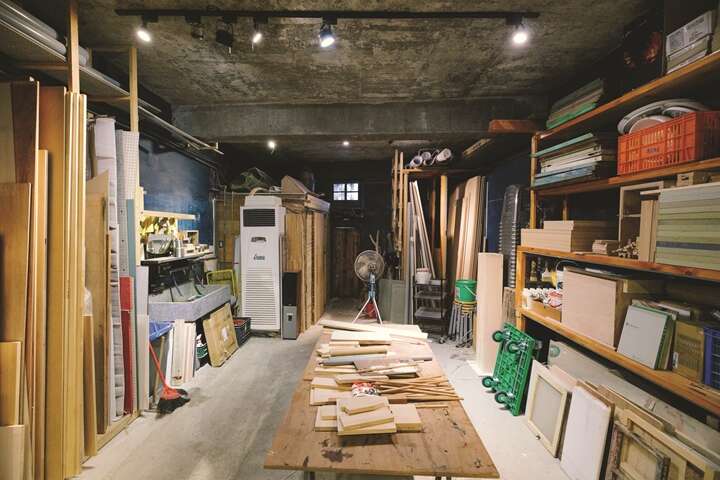 ▲Smooth Worksite is not only a carpentry classroom, but also an old house renovation project carried out by Chiang.

Chiang notes that "Artisans rarely have a voice, and are often overlooked, so I wanted to provide a stage to stimulate more dialogue." As such, Smooth Worksite has become the place where craftsmen can express themselves and the public can ask questions to learn more about them.

The Work Behind the Workmanship
"Working in this field is actually very romantic," says Chiang. He reminisces that the life of a craftsman is always very regular, especially in Taipei, where all workers in the renovation and construction industry are scheduled to leave around 7:00 a.m. every day, arrive at the day's worksite, and start work at 8:00 a.m. sharp. At 4:30 p.m. on the dot, they start to finish the work at hand, and leave at 5:00 p.m. Afterward they go home and spend time with their families; an ordinary yet fulfilling daily routine.

As carpenters are usually the lead unit on a construction site, they need to integrate other types of work such as masonry and ironwork, which is why Chiang has become a designer. He explains that "The project site is like a kitchen; just as one would have different processes for pan-frying, deep-frying, and plating, there are different procedures for masonry, plumbing, and electrical work, each of which is a very involved process and occasionally collaborative. The designer is the one who integrates all the elements and optimizes the process to improve efficiency." 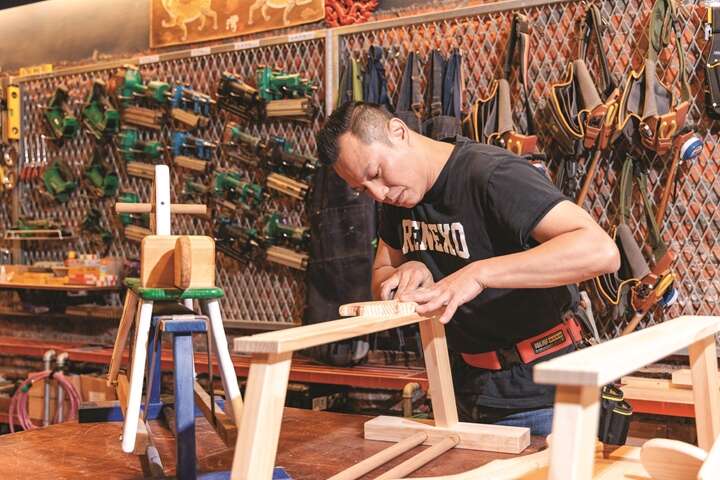 ▲Chiang demonstrates some basic carpentry skills, telling how the profession requires attention to every little detail.

In addition to running his craftsman masterclasses, Chiang is a part-time teacher at Beitou Junior High School (北投國中) where he provides professional carpentry guidance once a week. Smooth Worksite has also become an off-campus classroom for many schools around Taipei, where pupils come to learn how to operate woodworking machines properly and safely, and learn about the many professional skills of carpentry. 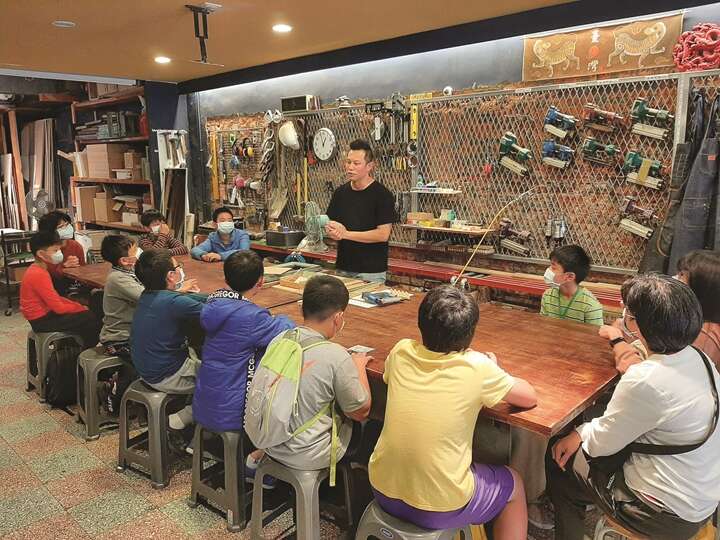 The Appeal of Old Houses in Taipei
Thanks to his profession, Chiang has participated in many of Taipei's old residential renovation projects, by which he could appreciate the city from a historical and cultural perspective.

He introduces Zhongnan Street, where Smooth Worksite is located. "It is one of the first streets developed in Nangang," he says, "which used to be a track for handcars to pass through." In earlier times, coal and Baozhong tea (包種茶) from the mountains were transported along this track. The building of Smooth Worksite itself previously housed a tea shop for over 80 years.

Other old houses also tell the history of the street. Nearby, there are the old family residences of the Que (闕家古厝) and Zhou (周家古厝) clans. Moving toward Civic Boulevard (市民大道), the arched verandas of the shophouses appear.

POPOP Taipei, near Nangang Station (南港車站), is also a notable recent example of the renovation and reuse of old buildings, now serving as a venue for the Taipei Flea Market and Funtasty Bazaar. Even though Chiang did not take part in the construction, Smooth Worksite has been invited to move and expand the craftsman experience there.

Meanwhile, Chiang himself has joined the renovation of Feng Jen Pharmacy (豐仁藥局) on Ningbo West Street (寧波西街) in Zhongzheng District. He used wooden-framed glass windows and retro tabletop cabinets to create a nostalgic ambiance, evoking the warm human touch of an old community pharmacy. The project subsequently won the Silver Prize of the Taipei Old House Regeneration Awards (台北老屋新生大獎) in 2018. 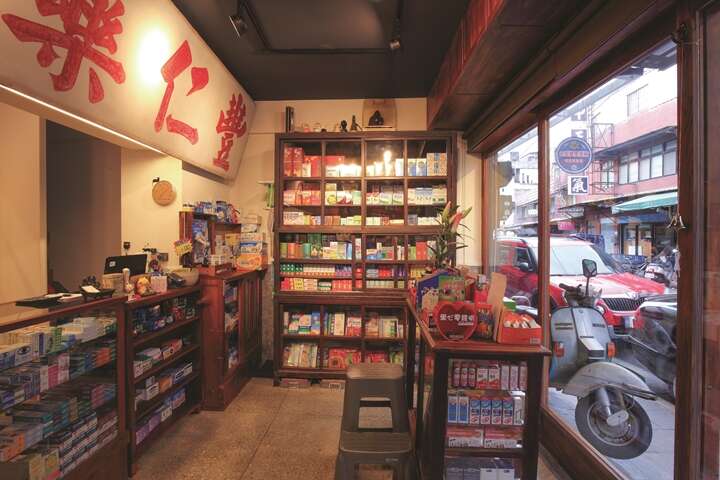 "I've always loved old houses, and I like to use existing resources and materials to add my own style and endow a new value," notes Chiang, with unbridled enthusiasm about his love for old houses. He continues to participate in related renovation projects, including an old Southern Fujian-style house in Datong District, and the Tangbu Cultural Park (糖廍文化園區) in Wanhua District.

"I'm observing old houses every day when I go out!" says Chiang, who hopes to be more involved in promoting Taipei's old house culture, introducing local stories that seem to live within the old bricks and tiles. He also hopes to link up with master craftsmen who have professional skills in their respective fields, thus allowing more people to learn about the wisdom of craftsmanship and the warmth of old houses, and of course, to explore the old-school soul of Taipei. 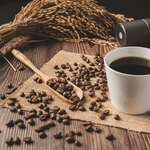 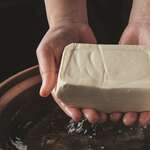