Amid the bustling Japanese-era shophouses lining Dihua Street in Taipei’s Dadaocheng neighborhood, a colorful temple draws throngs of visitors. The temple itself is modest in size, but bursts with colorful decor and human activity. If it seems older than the other nearby historic buildings, that’s because it is. Built in 1859, the temple has stood for more than 160 years. What’s more, it’s clear that this ornate temple is the center of religious activity along the southern stretches of Dihua Street.

This is the Taipei Xia-Hai City God Temple (台北霞海城隍廟), easily one of the most historic spots in Taipei, with a distinctive name and unique provenance. Furthermore, every summer the temple and surrounding neighborhood comes alive as the City God’s birthday is celebrated with two processionals, each with their roots in ancient tradition. Usually taking place in June, the Taipei Xia-Hai City God Cultural Festival (台北霞海城隍文化節) offers opportunities to explore and enjoy a historic, revitalized Dadaocheng as the weather warms up. 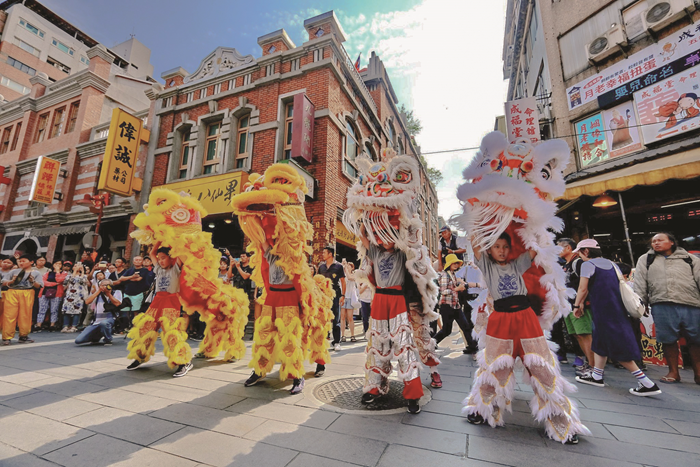 ▲The celebration of the Taipei Xia-Hai City God’s birthday is an important religious event in Taipei.

History of the Xia-Hai City God Temple
Many cities in Taiwan have city god temples (城隍廟). The City Gods — each a distinct deity connected to their city — watches over the city’s affairs and residents, both in the earthly settlement and its corresponding city in the afterlife. The term comes from the words “city (cheng, 城)” and “moat (huang, 隍)”. That is, the name of the god evokes the boundaries and defenses of a city. Residents pray for good fortune and the amelioration of natural disasters, and the City God in turn dispels malevolent spirits and pestilence. 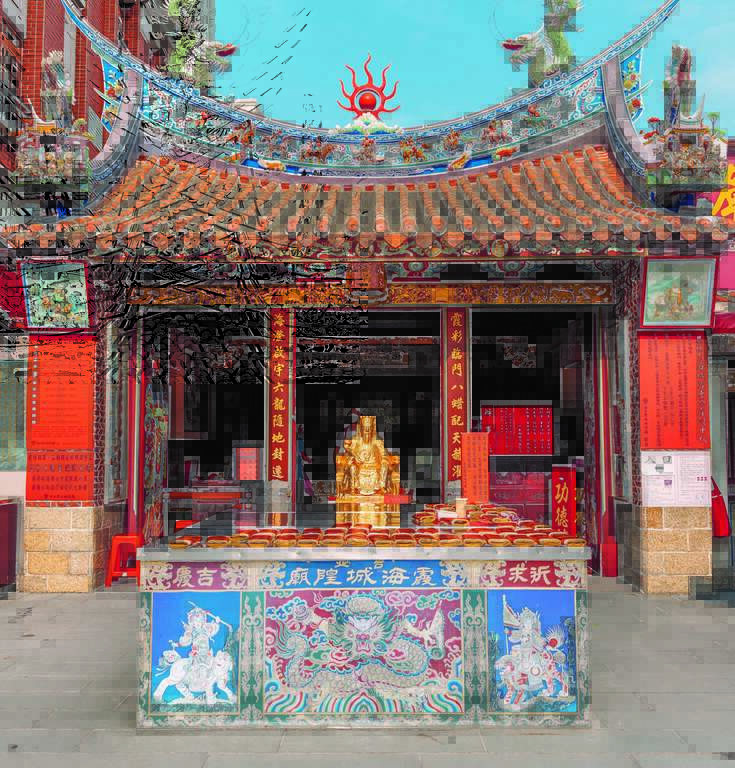 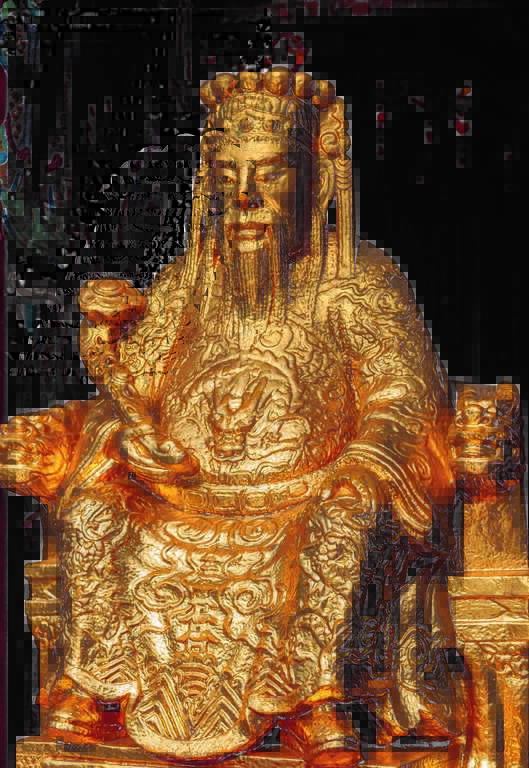 ▲Since its establishment in 1859, Taipei Xia-Hai City God Temple has served as the religious center in the Dadaocheng community. (Photo/Samil Kuo)

“He’s like the mayor who protects the city,” says Titan Wu (吳孟寰), head of Public Relations and Cultural Affairs for the temple. “And the Xia-Hai City God is the oldest city god in Taipei,” he adds.

The Xia-Hai City God Temple’s history is uniquely colorful. This City God was brought to Taiwan by immigrants from the town of Xiacheng (霞城), near Xiamen (廈門), China in 1821. Originally located in Wanhua, the Xia-Hai City God was transported north to Dadaocheng in 1853 after a skirmish between immigrant groups in Wanhua’s Bopiliao (剝皮寮) neighborhood. 38 men gave their lives to defend the Xia-Hai City God on his journey north, and they are memorialized in the temple today and help the City God dispel wicked spirits. The god himself resided in a temporary location until 1859, when the current temple was built.

In addition to the 38 Brave Guards, one can also pay tribute to the wife of the City God (for a happy marriage and attentive husband) and the Old Man Under the Moon, or Yuexia Laoren (月下老人, also called the Matchmaker God, who helps people find their soulmate), and the Buddha as well, installed in the temple during the Japanese era, which added a touch of religious syncretism to the temple. Other historical figures such as Liao Tianding (廖添丁) are also memorialized there. Liao, Taiwan’s 19th century Robin Hood, hid the money he stole from wealthy houses to distribute to the poor at the Xia-Hai City God Temple. 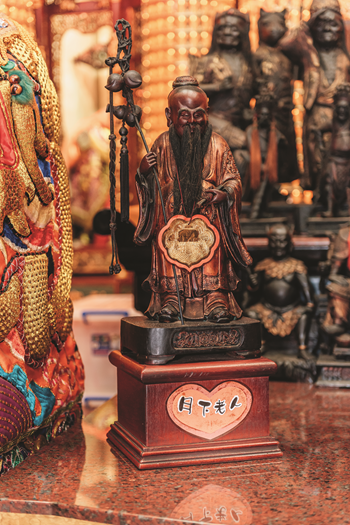 ▲In addition to the City God, the temple is also famous for hosting the Matchmaker God. (Photo/Samil Kuo)

When the Xia-Hai City God came to Dadaocheng, the area was sparsely settled. “It was the place where rice was dried. But then in the 1920s and 1930s, the area began to prosper as companies were set up to export Taiwanese tea,” Wu explains. “Although the temple has been renovated, it has never been expanded,” he continues, noting that it retains much of its original Qing Dynasty-era flavor.

Roaming Dadaocheng with the City God 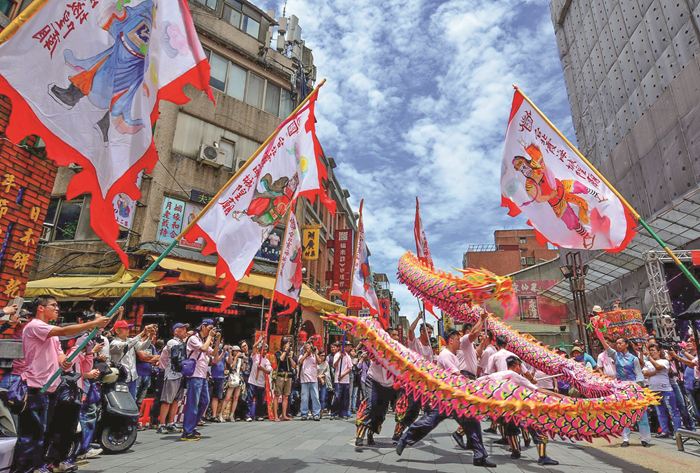 The Xia-Hai City God’s birthday is May 14th on the lunar calendar, which typically falls in June on the international calendar. In 2022, it will fall on June 12th. His birthday is celebrated with several events and formal rituals, the most notable of which is the parade (遶境) on the eve of his birthday. “The parade is held the day before, because he shouldn’t travel on his birthday,” Wu explains.

This processional carries the god around the neighborhood, accompanied by his “army”, including Generals Fan and Hsieh (范謝將軍), also known as Grandfathers Seven and Eight or Qi Ye and Ba Ye (七爺八爺). These are just two of the “tall gods” that are large representations of gods often found in temple parades you may see. Depending on the year, different numbers of performing troupes join the parade, which may include lion dances, dragon dances, more tall gods, and the Eight Generals or Ba Jia Jiang (八家將), with their distinctive colorful face paint. 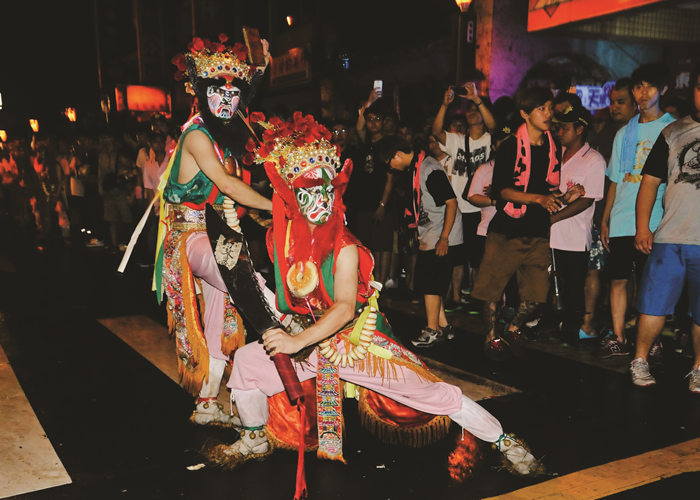 ▲With their faces painted in colors symbolizing the gods, the Eight Generals, said to have the power to exorcise demons, play key roles in the nighttime parade.

“We do this birthday parade because if the City God is always in the temple, this feels too far away. It’s better to be engaged in daily life, and go around to the people. In the past, there was a specific day for regular people to come and pray on his birthday,” Wu says.

Legend has it that as this parade is held during the sweltering summer months, young women coming outside to greet the City God would get sick from the heat and faint. The City God is said to have taken some of these young women to keep him company. In order to stop this, he was given a wife — and the tradition of married women praying to the Wife of the City God for domestic harmony was born.

What few realize is that there is more than one City God processional. In addition to the daytime parade, which is livelier and attended by locals and tourists alike, there is another one held at night, on May 11th on the lunar calendar. This parade is more solemn. The City God sends his army to visit the Earth God, or Tudi Gong (土地公) temples, marking the city’s boundaries in the four cardinal directions as well as the central Puyuan Earth God Temple (普願宮) on Guisui Street (歸綏街). The northernmost point is He An Temple (和安宮) near Hami Street (哈密街), which the procession is sure to visit as the devotees at this temple, historically, were their allies in the 1853 Wanhua skirmish.

The purpose of the night parade is to banish wicked spirits and eliminate pestilence from the town. “The parade is at night because that’s when the bad ghosts come out, and the City God aims to clean them out. That’s why he has his army and generals. The night parade goes to all the smaller places, because that’s where the bad ghosts are,” Wu notes. 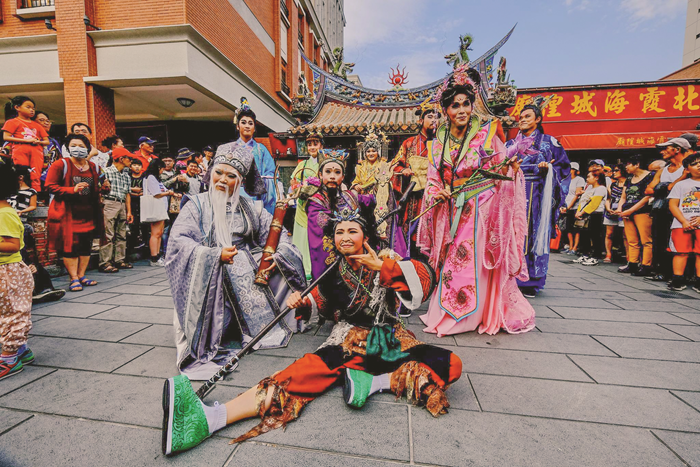 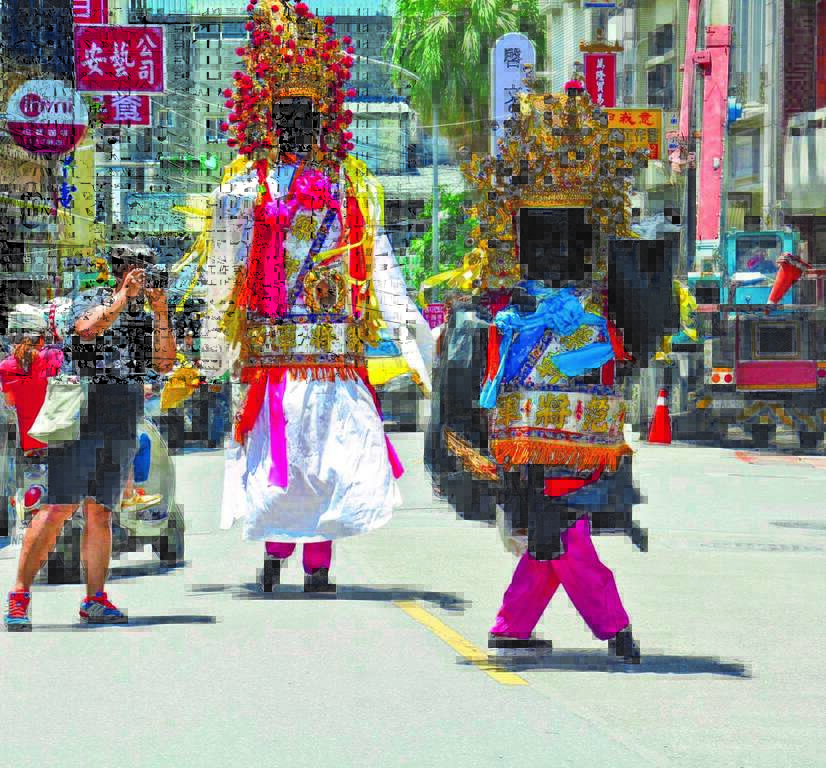 During the festival, participating shops hang yellow lanterns to indicate that they are hosting some special experiences to celebrate the City God’s birthday and showcase Taiwanese history and tradition. These might include restaurants or tea shops offering special menu items, or Chinese medicine shops or other businesses related to traditional goods and industries holding small exhibitions, shop tours or DIY activities. There are also non-religious parades and stage shows, Taiwanese opera, shows by children’s groups, Hakka, Indigenous, Hoklo and immigrant performers, as well as art installations.

“We do this because we want people to get to know traditional culture, especially in Dadaocheng as there is so much history here,” Wu says. “It also helps local industries because most of the people who come for the cultural festival will make purchases from the local shops,” he continues. 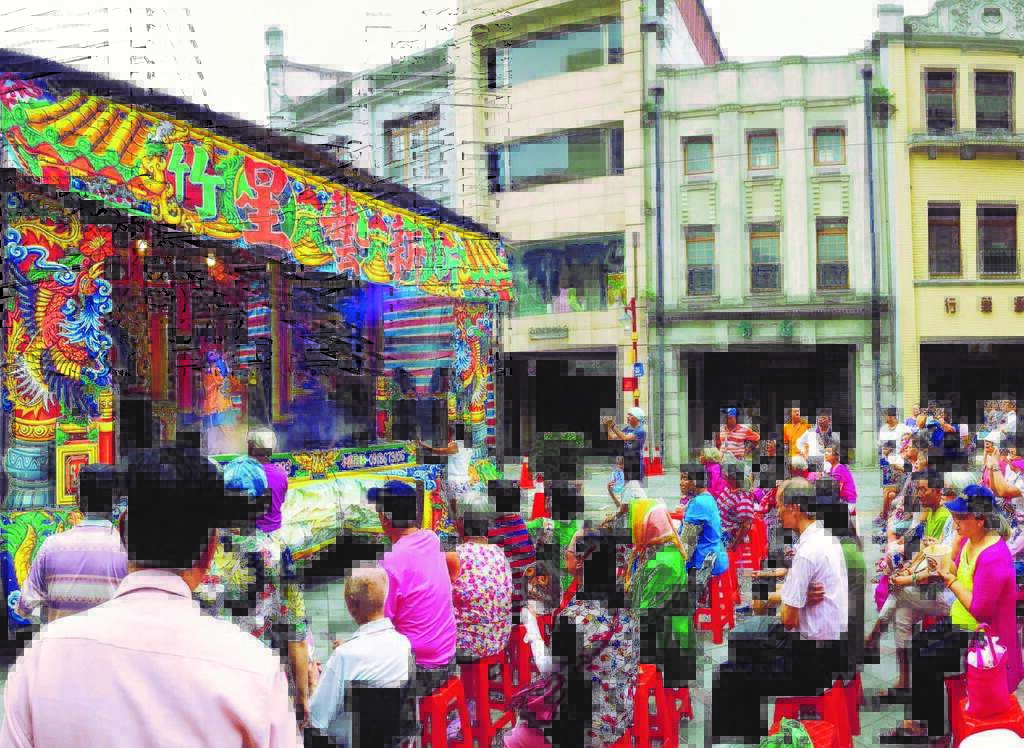 In Connection with Other City Events
The Xia-Hai City God Temple not only hosts the City God’s birthday celebrations and cultural festival, but sponsors a dragon boat team as well. One week before this year’s official dragon boat races, a small parade winds its way from the temple to Dadaocheng Wharf to bless the team and boat for the competition. The activity also enables the City God to enhance his protection around the waterfront. 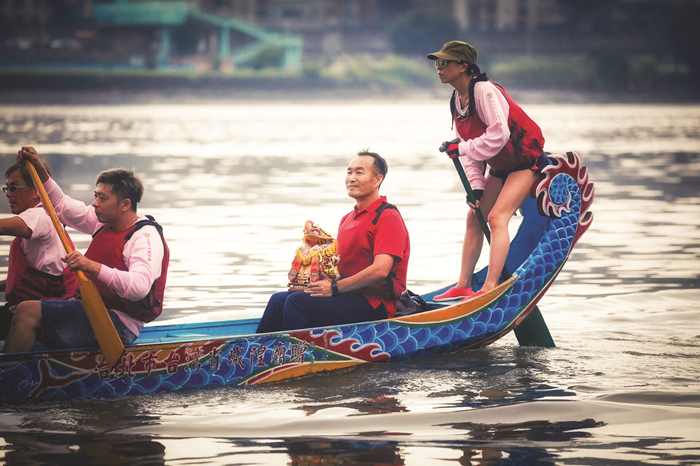 ▲The Xia-Hai City God is also presented on a dragon boat before the race, praying for good luck for the teams.

Meanwhile, as the temple hosts the most famous Matchmaker God in Taipei, it is also involved in Taipei Valentine’s Day (大稻埕情人節), a city-organized event usually held around Qixi (七夕, Chinese Valentine’s Day) in late summer. Activities are held at Dadaocheng Wharf, not far from the temple, and culminate in a spectacular fireworks show over the Tamsui River.

There are plenty of ways that foreign visitors can participate in the cultural events hosted by the Xia-Hai City God Temple, including joining the traditional parade or taking part in the online activities. “For the City God’s birthday parade, the most important thing is to just come and learn about it,” Wu says. “Watch the exhibitions and traditional rituals, visit the Chinese medicine or tea shops, and most importantly, feel the lifestyle and atmosphere of this old Taipei community.” 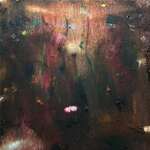