Centuries ago, when the Portuguese explorers first sailed by, they were not wrong when they dubbed Taiwan “Ilha Formosa,” meaning The Beautiful Island. A true emerald isle, Taiwan's natural beauty has long been highly reputed, and throughout history legions have been struck by its magnificence. Even in modern times, much of this natural beauty is preserved, and the enduring spirit of Formosa remains.

Copious rainfall coupled with the vertiginous topography manifest innumerable waterfalls all across the island of Taiwan. Taipei, the nation's capital, sits within a basin and is almost completely encircled by steep, lush mountains. The city skyline is a contrast of towering, futuristic skyscrapers and the looming, ancient hills. Within the Taipei City limits, there are countless gorgeous waterfall vistas waiting to be discovered. So, we’ve compiled a brief list of short waterfall hikes that are perfect for a wonderful half-day excursion.

For this trip, we will venture up the mighty Yangmingshan, in search of a pocket of waterfall trails that are all within reach of one another. Yangmingshan is the grand behemoth that stands watch over Taipei, whose Qixing Peak (七星山主峰) pierces the sky at 1,120 meters above sea level. The sprawling Yangmingshan National Park is a highly diverse landscape famed for its multitude of hiking trails, dazzling floral festivals and pungent volcanic activity.

By far the most accessible way to explore the mountain is by car, but there are also many convenient bus services from Taipei. For example, MRT Jiantan Station (捷運劍潭站) on the Red Line (Tamshui-Xinyi Line, 淡水信義線) in Shilin District has bus services to the main bus depot on Yangmingshan, and from there you can access many of the trails or transfer to smaller bus services that connect to all the popular destinations.

❗️❗️Please check weather and water conditions and exercise caution if entering any body of water. 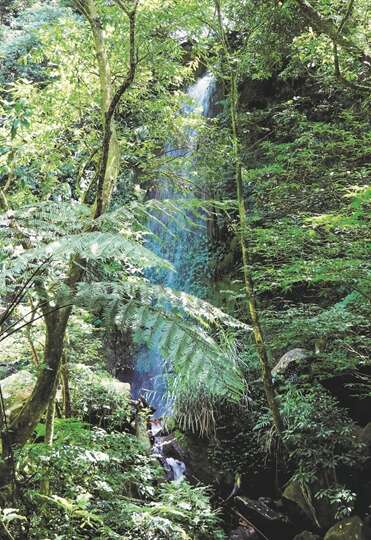 ▲Hidden in the woods, Juansi Waterfall looks just like a thread of silk streaming from the sky, oxidizing the rocks below and turning them red.

First on our list is Juansi Waterfall, a whimsical little waterfall and a hike with history. The trailhead is located on the side of Lane 101 of Jingshan Road (菁山路101巷) and is close to a small bus stop reachable by taking Bus S15 from MRT Jiantan Station to Juansi Waterfall stop. Bear in mind that parking is limited on the narrow street should you choose to drive.

This particular trail connects to the Pingding Ancient Canal Hiking Trail (坪頂古圳步道), which features a series of irrigation channels built to supply water to the local residences and farmland, with some dating as far back as the Qing Dynasty (清朝, 1636 A.D. – 1912 A.D.). The waterway beside Juansi Waterfall Trail (絹絲瀑布步道) is called the Shanzhuhu Irrigation Channel (山豬湖水圳), and it was built during the period of Japanese occupation between 1895 and 1945 for the cultivation of high-yield crops such as rice to improve the economy and lives of local residents. The channels themselves are literally right beside the path, so be mindful of your step as there are no guard rails for the most part. The bubbling of the clear water streaming by blended with the calls of the forest creatures creates a pleasant ambience.

The stroll is a cool and well-shaded jaunt through the jungle canopy with resplendent views down to the valley below. The path snakes its way around the mountainside until it arrives at the waterfall about one kilometer from the trailhead. The fall is formed across a fault. With the water source coming from Lengshuikeng (冷水坑) located in higher terrain, the water flow also causes oxidation on the rocks, which colors the stream reddish brown. 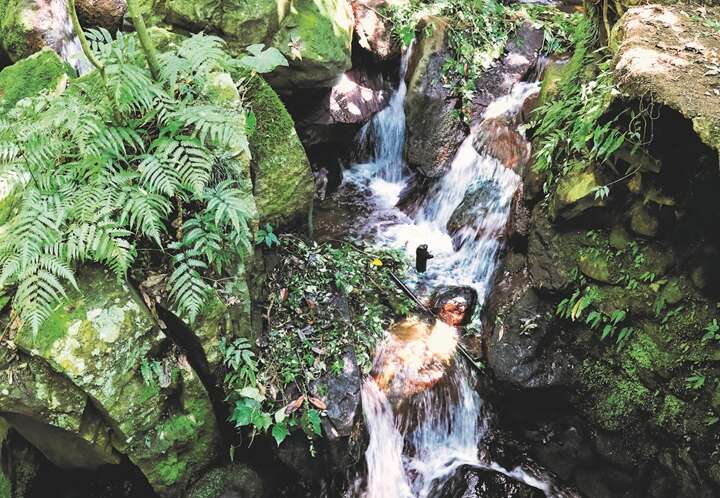 ▲Hidden in the woods, Juansi Waterfall looks just like a thread of silk streaming from the sky, oxidizing the rocks below and turning them red.

The name Juansi means “silk” in Chinese, owing to the wispy white appearance of the cascade which is best viewed from the bridge at the foot of the fall. Just on the other side is a rest area, and if you walk for another 50 minutes, the path continues further up to the Qingtiangang Grassland (擎天崗草原), known for its roaming water buffalo, and down towards the path are Dingshan (頂山, Mt. Ding) and the other historic canals of Pingding.

To check out the other two waterfalls on our list, it would be best to double back to the beginning of the trail. 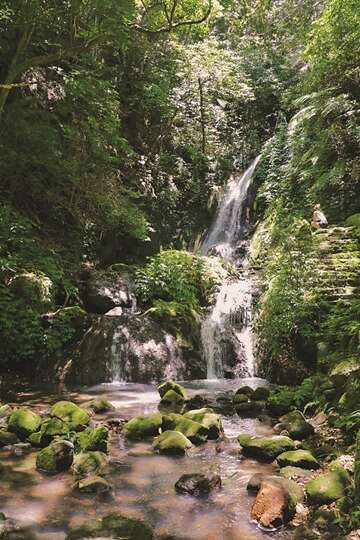 ▲The trail beside Xiaoyintan Waterfall allows hikers to get close to this refreshing wonderland.

Our second destination, Xiaoyintan Waterfall, feels like it could have sprung straight from a fairytale. The name literally means “little secret pond,” which is a perfectly descriptive name because it could very easily be missed while driving by, as the falls are tucked away inside a narrow gorge shielded by tall trees.

The best way to reach the little secret is to first head past it to Yangming Park (陽明公園), which is a destination famous for cherry blossoms in spring and maple leaves in autumn, and can be reached by taking Bus S9 from MRT Beitou Station (捷運北投站) or Bus S8 from MRT Shipai Station (捷運石牌站). From there, Xiaoyintan is a short five-minute walk south, back down the hill.

Xiaoyintan is a rest stop carved by Mother Nature, a tranquil little pocket of beauty. The waterfall spills down from on high, collecting into a few crisp waterholes that you can dip your feet into, but beware of slippery rocks. The milky water is caused by the sulfur in the river that can be traced up to the hot spring area in Yangmingshan, yet the water temperature is surprisingly cool and refreshing. There are many stepping stones giving passage across the streams and similar stone tables about the various levels. The entire area is well protected from the burning sun, so it’s the perfect place for picnic lunch, especially on a lazy autumn afternoon. 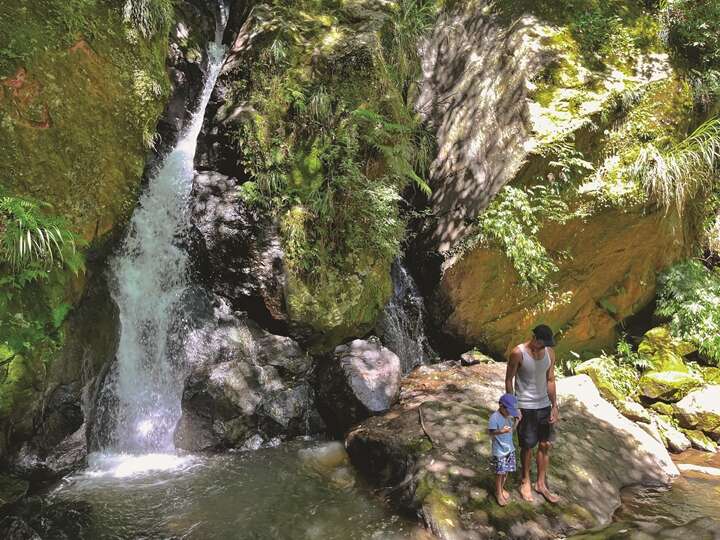 ▲Datun Waterfall is shaded by trees that block the sun, which makes it a good spot for resting during a hike on Yangmingshan.

To reach the final destination on our list, return to Yangming Park and walk 15 minutes north past the cherry blossom trees and the Yangmingshan Flower Clock (陽明山花鐘). From there, the entrance to the Datun Waterfall Trail (大屯瀑布步道) is a couple minutes up the road. This stretch of trail is well paved with some beautiful lookouts over Taipei City. Just ahead, the road bends around the mountainside to meet the falls.

Datun Waterfall is the largest of the three falls on our list. The three-story high fall sits at the foot of the great Datun Saddle (大屯山鞍部), whose three peaks offer some of the best hikes in all of Taipei.

Following the main trail in, you will arrive directly at the higher end of the falls which run under a bridge before dropping down to a larger rest area below. The relentless torrent of water has cleaved the stone in several pieces, and there are massive boulders strewn about the pools. It is a reminder of the raw power of nature.

A short walk back down the nearby steps, and you can find some seating beside a small shrine embedded within the rockface. From here you can cross the stream and loop around to another small bridge or chill out with your feet in the water and watch the schools of fish that call this oasis home. 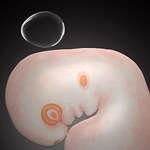 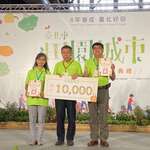