After 23 Years, Home at Last!
The Taiwan Lantern Festival in Taipei ▲Xinyi Commercial District is themed “Lights of the Future” and the illumination paints Taipei 101 into a new shiny face.

The nights of Taipei will be ablaze with festive light from February 5th to the 19th, 2023, with the staging of the Taiwan Lantern Festival in Taipei (台灣燈會在台北). This will be the first major international tourism event of the 2023 calendar, attracting revellers from all around Taiwan and the globe, and also one of the first international extravaganzas to hit the stage since Taiwan’s easing of COVID border restrictions in October. Taipei was the venue for the Taiwan Lantern Festival from its first edition in 1990 up to 2000. Starting from 2001, it has been touring the country, and is at last returning to its birthplace.

Among Taiwan’s largest Lantern Festival celebrations, the event in 2023 will be combined with the city’s annual Taipei Lantern Festival (台北燈節), with hundreds of thousands of revellers expected. The central government’s Taiwan Tourism Bureau (交通部觀光局) and the Taipei City Government (台北市政府) have joined forces as co-hosts, with many private sector enterprises also cooperating. The attractions will be concentrated in the posh East District (東區) and Xinyi District (信義區), and will include four major lantern display zones with over 300 lantern installation works, as well as the main theme lantern with six other major theme lanterns, spread out over a total area of 168 hectares. In addition, smaller lantern-display zones will be set up across all 12 of the city’s administrative districts, making the Lantern Festival and the cityscape seamlessly integrated. The annual Lantern Festival, which falls on the 15th day of the 1st lunar month, is an ancient celebration that brings the traditional Lunar New Year holidays to a close. Prior to 1990, the scale of celebrations was relatively small, primarily centered around local temples. Exceptions included the Yanshui Beehive Fireworks Festival (鹽水蜂炮) in Taiwan’s south and Pingxi Sky Lantern Festival (平溪天燈節) in the north. Both of these are now the centerpieces of larger- scale festivals.

In 1990 the Taiwan Tourism Bureau decided to create a large-scale Lantern Festival party spread over many days. It was held in Taipei, with the grounds of the Chiang Kai-shek Memorial Hall (中正紀念堂) as venue. There were three goals: to promote traditional folk culture domestically, to showcase Taiwan culture internationally, and to create a must-see spectacle that would revitalize the commercial energy of the chosen venue by attracting great numbers of tourists from both around the country and the globe.

Since the year 2001, in the hope to pass down the experiences of large-scale events across Taiwan, coupled with the aim to vitalize local economy, different host locations have been chosen each year. In the meantime, the Taipei City Government has continued with its own large-scale international event, the annual Taipei Lantern Festival. Each edition of the Taiwan Lantern Festival features a central display and entertainment area with the large-scale main theme lantern, a number of smaller theme-lantern areas with works crafted by both local and international artists, and a rich program of live entertainment, from musical groups to traditional- culture performance troupes to buskers. The main theme lantern is based on the Chinese zodiac animal for the year, with 2023 being the Year of the Rabbit.

“Light Up the Future” — An “Urban-Style Lantern Festival”
Whereas over the years other host cities have staged their events in a large block of open land, the 2023 party will be an “urban-style Lantern Festival” held right in the city’s busy, densely-populated heart, integrating the Eastern Shopping District (東區商圈) and Xinyi Commercial District (信義商圈) along the Taipei Metro network, incorporating such iconic tourist attractions as National Dr. Sun Yat-sen Memorial Hall (國父紀念館), Songshan Cultural and Creative Park (松山文創園區), and Taipei 101 (台北101) into one giant party stage. The diversified artworks will be scattered amongst the high-rise buildings with light fleeting between the city’s alleys.

The official theme is “Light Up the Future.” According to the event organizers, Light(ing) Up the Future is the Taiwan Lantern Festival, which originated in Taipei. As the first full moon of the Lunar New Year is being welcomed, this full moon ride is believed to carry the hopes and dreams of our future. With Taipei and the world now emerging from the COVID darkness, the festival will light up the world with a breakthrough attitude, with innovative displays created by combining traditional lantern art with the latest in lighting technology.

The key visual for the 2023 Taiwan Lantern Festival is a super-sized moon-like orb that lights up the city. The rounded shape of the wide Taipei Basin in which the city of Taipei is nestled, was the base inspiration for the orb design. It is engraved with a stylized Taipei City streetscape. Just as the staging of the festival brings together a massive glowing collection of lantern lights into a singular whole, every household spread through the basin contributes its own light of hope. The rising glowing sphere emits a warm, embracing radiance, symbolizing the first full moon of the newborn year, blanketing the entire city with an ethereal beauty.

▲The key visual of 2023 Taiwan Lantern Festival in Taipei.

The visual was designed by Kim Chen (陳青琳), founder and creative director of Taipei’s Depth Design (深度設計), who says, “The orb’s flowing radiance illuminates the land and nourishes everyone. Hope does not happen out of thin air, but is born through the joint efforts of everyone who lives on the land.”

The Beacons of Light Display Zone is in the ultra- modern Eastern Shopping District. It extends along Zhongxiao East Road (忠孝東路) between MRT Stations Zhongxiao Fuxing (捷運忠孝復興站) and Sun Yat-Sen Memorial Hall (捷運國父紀念館站), on the Bannan Line (板南線, Blue Line). Here, the urban grid will itself be the display stage, with creative lantern works installed in the lanes and alleys, all around the district. Such the display stage will also be extended to many stores in this district, as businesses in the district will be adding to the visual pageantry by bringing festive art to their premises for revellers to enjoy. Some artists will be invited to tailor lighting decorations for these stores according to their types of business, space and ideas. 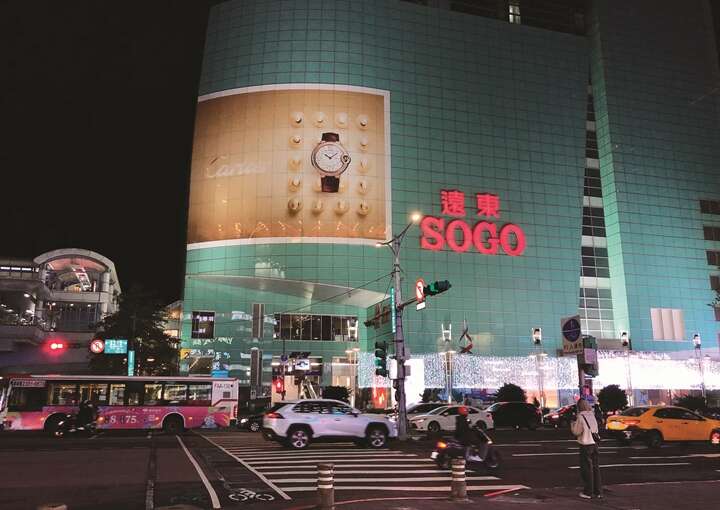 ▲The Eastern Shopping District, usually filled with lots of people and traffic, is one of the main exhibition centers of the 2023 Lantern Festival. (Photo/Taiwan Scene)

To echo the fact that the Eastern Shopping District leads Taipei to the forefront of innovation, the Beacons of Light in this display zone unveils the city with light and works that reinterpret the pride of Taiwan, as well as the light of Taiwan and Taipei from the past to the present that has been felt.

The Fount of Light Display Zone is located within Songshan Cultural and Creative Park. This attraction is directly across Zhongxiao East Road from National Dr. Sun Yat-sen Memorial Hall, and is accessed using the same Taipei Metro stations. Since Songshan Cultural and Creative Park has more than a century of history and is imbued with renovated tobacco factory heritage structures which date back to the 1930s, this display zone is designed to be a fusion showcase of old and new, providing visitors with a buffet-style experience of the diverse cultures that make up the Taipei mosaic.

The city of Taipei was founded in the 1880s, with its oldest neighborhoods settled much earlier. A special focus for the Taiwan Lantern Festival organizers is how the city’s people embrace diverse cultures from all over the world and how, building on this cultural collage, Taipei has become a source of cultural innovation that bring people rich stories and connotations. The Fount of Light is located in this field of fusion of the old and new, and everyone is invited to leap into this source of innovation, allowing the works to lead us to experience the diversity and harmony of Taipei. ▲Songshan Cultural and Creative Park is another main spot in the 2023 Lantern Festival, and there will be more must-sees than ever before, filling visitors with a sense of anticipation.

The Lights of the Future Display Zone is located within the Xinyi Commercial District. The area is served by the Taipei Metro’s Taipei City Hall Station (捷運市政 府站) on the Bannan Line and the Taipei 101/World Trade Center Station (捷運台北101/世貿站) on the Tamsui-Xinyi Line (淡水信義線, Red Line). A highlight of this area will be 44 South Village (四四南村). This is a former military dependents’ village that was saved and has been transformed into a chic modern-facing cultural-creative hub — a quintessential “old-meets- new” city project symbolizing the Taipei City sustainable future.

The Lights of the Future Stage for live performances will be in the Xiangti Avenue Plaza (香堤大道廣場). There will be a daily program, featuring musical groups, performance troupes, and other talents. ▲Xiangti Avenue Plaza in Xinyi Commercial District is a place for various kinds of performances during the 2023 Lantern Festival.

The Xinyi area is well known as the most international and fashionable business district in Taiwan, bringing together major international brands and enterprise groups. In this area, the sleek buildings themselves will be transformed into giant works of art, showcasing Taipei’s leading-edge fashionable culture and digital technology. The Lights of the Future transports us into the moment of the most luminous Taipei, and the future of Taiwan is created by Taipei. ▲Many artists are invited to craft light illuminations with futuristic designs during the festival.

On display here will include light stands, the main Year of the Rabbit theme lantern and three of the other major themed lantern works, and this will also be the site for a number of themed lighting display zones. The memorial hall building itself will be magically transformed into what is being called the “Ultimate Classical Lantern (最經典的燈).”The main feature of this area is to combine traditional lantern art with modern high-tech 3D mapping multimedia technology to create a coruscating, sumptuous lighting zone. The Main Stage for live performances will be at the memorial hall. There will be a daily program, featuring singers, musical groups, and performance troupes.

Wintertime Lead-In Events
A duo of large-scale Taipei annual wintertime Christmas season events have been used as lead-in celebrations to get people primed for the Taiwan Lantern Festival.

2022 #Taipei Xmas (2022繽紛耶誕玩台北), which starts from November 18th, 2022 and finishes on January 3rd, 2023, is spread over the city’s many large department stores and a number of major commercial areas, including the Eastern Shopping District. Shopping revellers roam the various venues following a stamp map, the venues featuring live entertainment and festooned with Christmas lighting decorations.
Over 60 Christmas check-in points have been created. ▲The pioneering event's lighting decoration “Future Tree” transforms the Songshou Square ( 松壽廣場 ) in Xinyi Commercial District into the entrance of future Taipei, and here is a place where people make their new year's wishes. (Photo/Department of Information and Tourism, Taipei City Government)

The 2023 Taipei New Year’s Eve Party (台北最High新年城-2023跨年晚會), a grand countdown party ringing in the new year, is held on December 31st, 2022, drawing revellers in their hundreds of thousands from Taiwan and abroad. This was designed as a “once in a lifetime Asia” spectacle, with a phantasmagoria of lights put up around Taipei City Hall to transform Taipei into the “Highest New Year City,” a massive six-hour party through the evening with popular local and international singers and bands performing on stage, and the tremendous Taipei 101 fireworks show at midnight.

Both of these celebrations are also major lighting-art showcases, and will set the stage for the February high-tech lighting fantasia. Note that despite the official event name, there are also follow-on party events from January 1st to the 3rd. 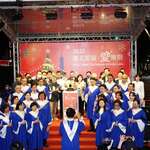 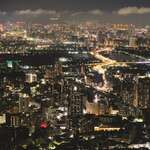