Taipei Avian Touring On City Corners
The Beauty of Birdsong

When a city attaches importance to leisure and entertainment, seeing them as an essential part of life, a green environment of richness and diversity will often be mapped out step-by-step. Over recent decades, many ponds, lakes, and parks have been incorporated into the Taipei landscape, and the city’s great variety of marshes, wetlands, and suburban forests have been targeted with protective and remedial measures. These revived habitats then can attract animals of all kinds, making this city a place with a rich ecology. 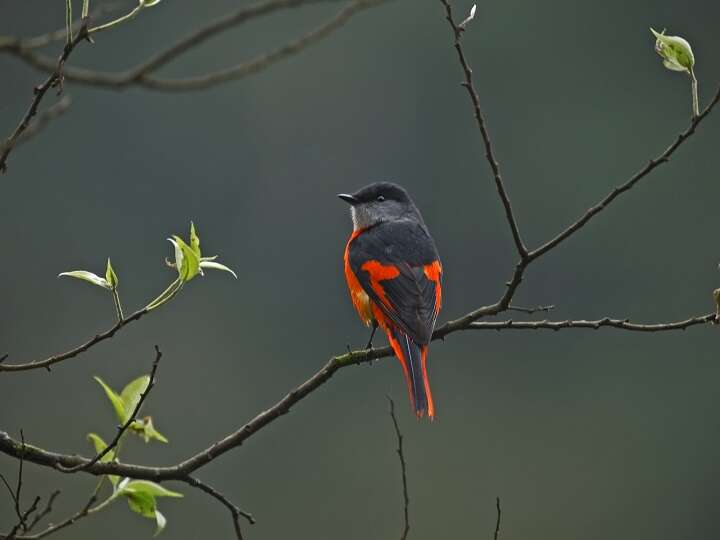 Forest Birds Thick as Falling Leaves – The Yellow-Throated Minivet
The non-migratory yellow-throated minivet is a common sight in mid- and low-elevation mountain areas. It has a slender body with great variation of color between males and females. Many people head into the hills to view this bird, initially attracted by its bright plumage. In nature, the general rule is that the male is brighter and more colorful, but this is not the case with the yellow-throated minivet, and both sexes sport eye-catching bright hues: the male red, the female yellow. 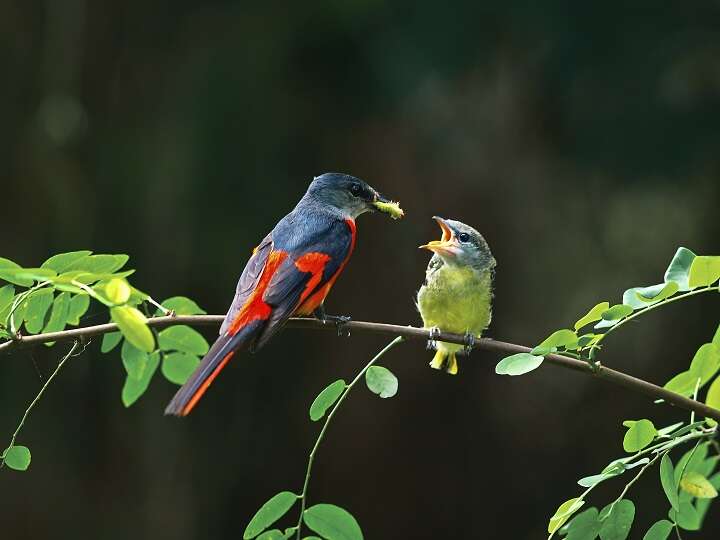 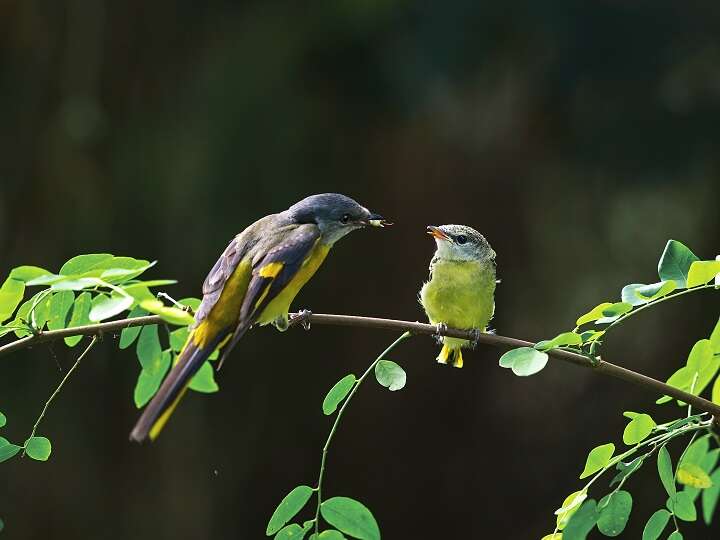 When it perches on a treetop, the male looks so much like a hanging red chili pepper that in days gone by it was commonly called the “red mountain pepper” (紅山椒) in Chinese. Most of its time is spent in the upper and middle levels of the primary forest canopy. Cutting a lovely figure, this little bird endlessly calls out a high-pitched “shee shee, shee shee” – like a gaggle of models chattering at a fashion event!
As autumn makes way for winter, and tree leaves turn to red and yellow – the minivets perch on the arboreal canvas for a spell, resembling lovely pieces of jewelry. The art of their feathers now makes the perfect camouflage, and, taking to the wing, the flocks in the valleys seem blown about like leaves – grand bursts of color!
In winter, yellow-throated minivets move down to the low mountain areas. They do not fear humans and are frequently spotted in such locales as Maokong (貓空) and Erge Mountain (二格山). 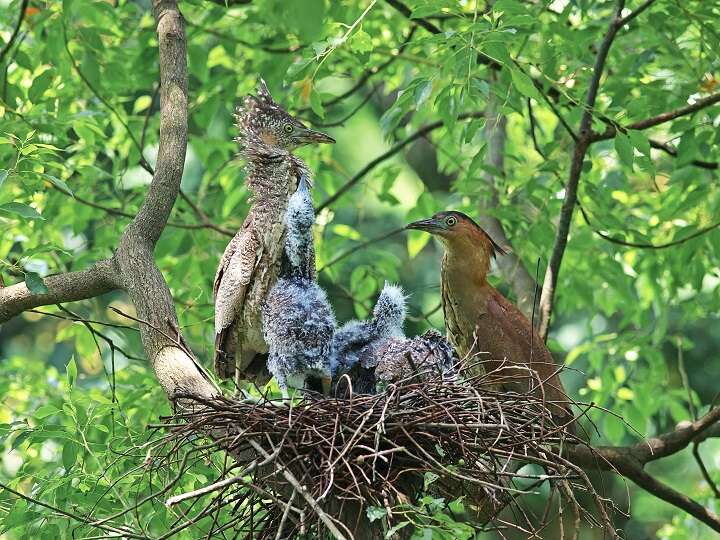 ▲ Whether the black-crowned night heron can live safely is an indicator of local residents’ respect for the survival of bird species. (Photo: Guo Gengguang)

The black-crowned night heron is dull and dark, with indistinct features. As big as a chicken, it prefers secluded, low-level forest habitats. In the past, it was always regarded as a rarely-seen member of the heron family, and even as a migratory bird. Of late, as birding has gained popularity, sightings have taken place not only in low forests, but can also on tree-lined school campuses and in parklands.
After nightfall, in spring and summer, should you hear a persistent low “tooting”– there is almost surely lovemaking going on in the trees around you!
While foraging, the heron’s preference is to move slowly through the muddy grassland, listening intently for prey. Location determined, they strike with the speed of lightning to snatch their meal. Earthworms and other subsurface animals are their main foods, but they will also occasionally peck at reptiles and amphibians on the surface. 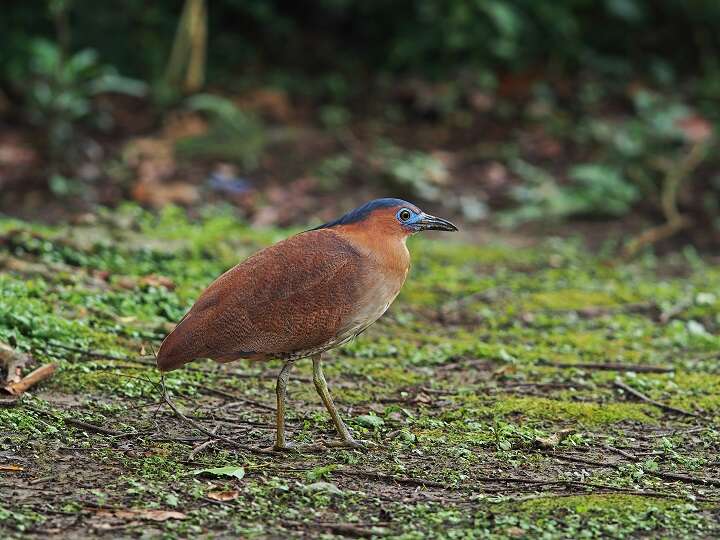 Today, some schools are taking action to respect the living environment of avians. During breeding season controls are put into effect and students urged not to interfere. Over time, many campus’ black-crowned night herons have become less fearful of humans in comparison with their fellow herons. On their own familiar terrain, they’ll often be seen calmly pecking about within two or three meters of people, or standing stock still, as if daydreaming or in a daze. Move closer, however, and off they fly.
As a result, the question of their continued safe dwelling in the city becomes one of whether local residents respect their survival or not. 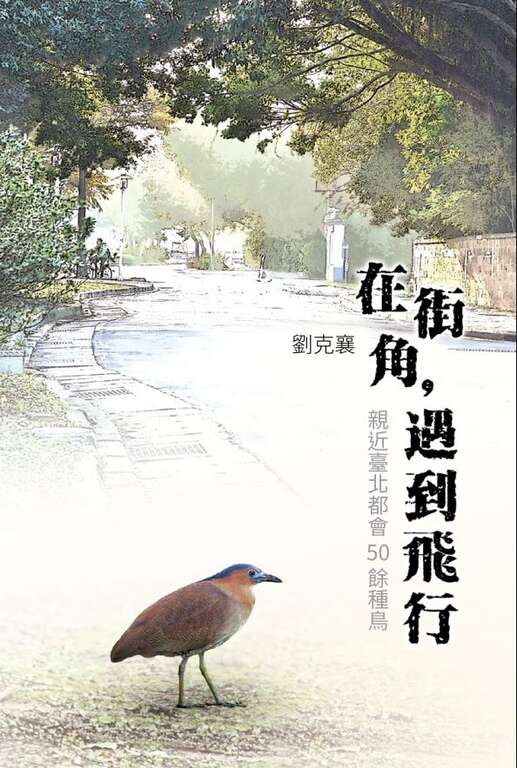 BOOK NEWS
This article is an excerpt from Encounters with Avians on City Street Corners (在街角，遇到飛行), soon to be published by the Department of Information and Tourism, Taipei City Government. Written in elegant prose by nature and ecology writer, Avian Liu (劉克襄), the reader is introduced to 50 bird species commonly sighted in Taipei City. QR codes are also provided with which readers can access various bird calls, and enjoy a veritable auditory feast of nature. 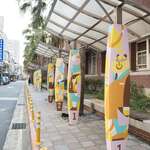 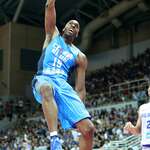 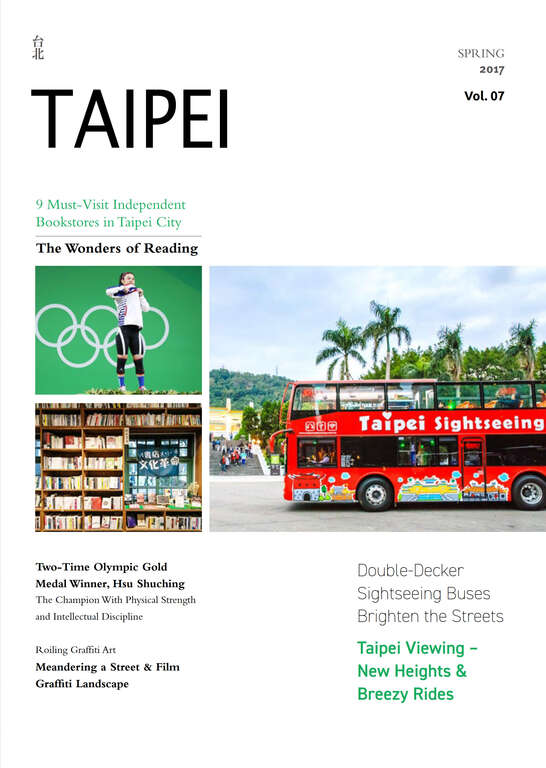