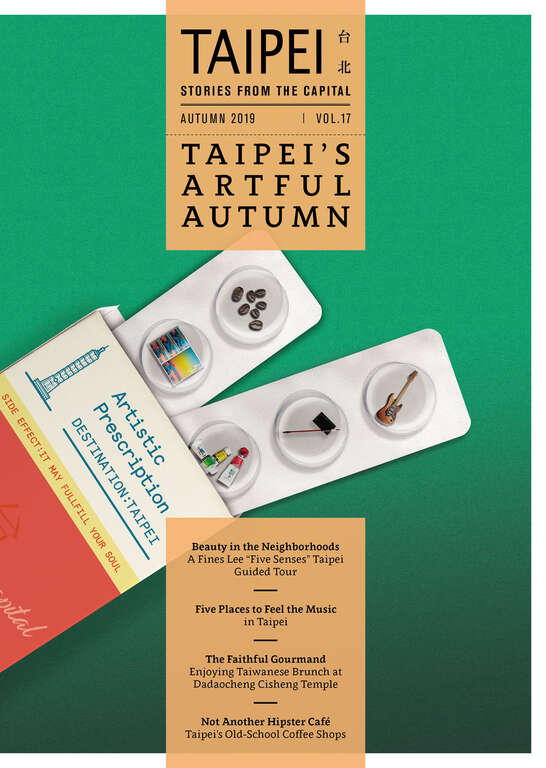 Notes from a Taipei Autumn

Taipei’s arts scene is getting a lot of attention these days, not only in Asia, but throughout the world. In this autumn issue of TAIPEI, we invite the editor of The Big Issue Taiwan, a monthly street newspaper covering the arts and a wide variety of other topics, to give us a tour of the Taiwan capital from the standpoint of the five senses — hearing, sight, smell, touch, and taste.

Autumn is a time full of artistic events in Taipei. One of those is Nuit Blanche, an annual all-night arts festival, and we’ve got your sneak peek at the festivities before they begin. Another reason to celebrate is the fact that Taipei recently became the cover story of international magazine Flaneur, which turns every issue into a deep-dive exploration of a city street. We have a chat with Flaneur’s editor about the beauty to be found throughout the streets of Taipei.

Also featured in our autumn issue is an exploration of Taipei’s vibrant music scene, exciting live music clubs and underground dives, and interviews with artists whose specialties range from calligraphy to illustration and dance to find out what Taipei looks like through their unique lenses. Then, there is a piece on Taipei’s old-school cafés, places that keep to the old ways in terms of decoration, service, style, and atmosphere, that give you a chance to sit, relax, sip on a cup of aromatic coffee, and experience what Taipei was like in decades gone by.

When it comes to culture, we’ve got two of the biggest festivals of the autumn season covered — Memorial Ceremony for Confucius and the Qingshan King Rituals, bringing you features on ancient temple rituals and more.

Autumn truly is an artful time in the capital, a place where artists young and old find inspiration in the metropolis’ ever-changing facade and myriad traditions kept alive for centuries. There’s never a bad time to visit Taipei, but when the weather cools and the culture flows, autumn might just be the best season of all to see what the city has to offer.
Download entire TAIPEI Introduction to TAIPEI