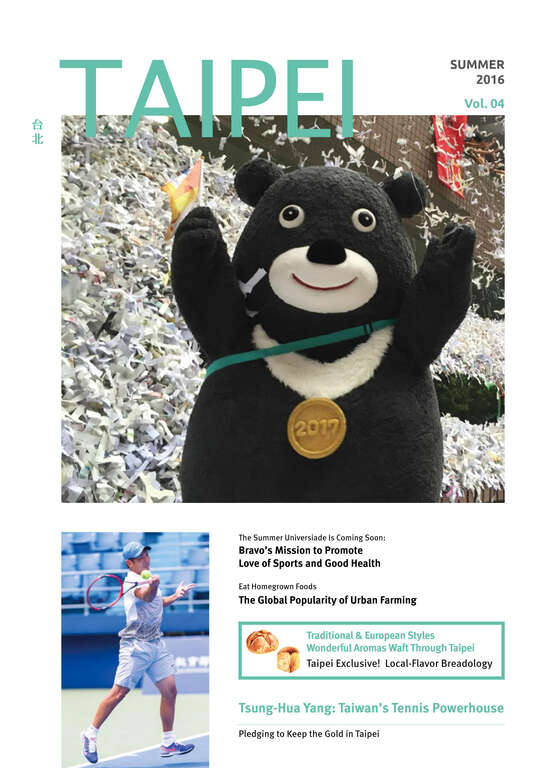 Holding a Ladle of Clear Water, Cultivating an Acre of Lush Green Fields

During these sweltering days of summer, heading to a countryside stream and dipping your feet into the cool waters while listening to the chirps and calls of frogs, insects, and birds is indeed a very pleasant experience!

Taipei Mayor Ko Wen-je Ko is promoting the Garden City initiative, bringing the countryside into the heart of the capital! The Garden City concept originated in the late 19th century. Based on environmental-protection, sustainability, and ecological ideas, cultivated edible landscapes on school campuses, rooftops, and even pedestrian lanes create a break from the traditional images and boundaries associated with green spaces. Moreover, this has helped communities to transform unused neighborhood into farms, promoting a friendly urban-farm lifestyle.

Famed British chef Jamie Oliver once said that this is a lost new generation. Children do not know how to cook, or where food comes from. They do not even know how to eat healthy. When children observe vegetables growing inch by inch and are affected by the energy of life breaking through the soil, knowledge of nature and health education is unconsciously initiated. Perhaps you can also start out on an "eating green micro journey," bringing fresh vegetables on an outdoor picnic – for in this world, health will forever be most important.

In this issue's "All About Cuisine" section, we follow the aroma of freshly baked bread as it wafts through the air. We pursue the blissful flavor of breads exclusive to Taipei, from adzuki bean and green onion Taiwan-style breads to classic European-style breads to trendy, innovative breads that are a fusion of East and West. Since Wu Pao Chun won the title of Master Baker at the Bakery World Cup, bread has been a great source of pride for the people of Taiwan. Taipei is not only a veritable bread paradise, but also a bread-making competition venue! In this issue, bakeries in the city's four corners are visited by a food professional and a travel expert to introduce you to the breads that Taipei residents especially love.

Preparations have long been underway for the 2017 Taipei Summer Universiade. The official opening ceremony is not long off, with less than 400 days left. The very responsible event mascot Bravo has been completing multiple assignments, participating in sports activities such as parkour, archery, basketball, and hiking, to raise awareness of the Taipei event 2017 Taipei Summer Universiade . On Taiwan's men's volleyball team at the upcoming Universiade will be have a set of tall, handsome identical twins, Liu Hung-Min and Liu Hong-Jie, members of the Amis indigenous people. In keeping with their superb mutual tacit understanding, they were simultaneously chosen for the national team. They have shared many years of training hardships, and hope that during the competition the referees will not think that they are seeing double. On the junior circuit, among the four majors, tennis ace Yang Tsung-Hua has had once won the Australia Open, French Open, and Wimbledon. At the 2015 Summer Universiade in Gwangju, Korea he earned a silver medal as part of the men's team and a bronze medal in men's singles. Currently giving his all in preparation for the Taipei Summer Universiade, he hopes that he can achieve even better results on his home court.

(Kathy: in the article itself we use “tsung-hua yang.” However, it would look strange to use that format here, because it does not match the style used for the other athletes.

I think we must ask the taipei city government to make an official decision on which style they want us to use, and only use that style in future. It doesn’t look good switching between formats in the different articles.)

Japanese photographer Mika Ninagawa has taken Taipei by storm with her bright, gorgeous photographic style. From flowers to cherry blossoms, portraits, and the wide world, we see the different charms of Taipei through her eyes. Her works have added even more beauty to the Taipei landscape. Under Ninagawa's lens, flowers are delicate and charming – the same can be said of Taipei in summer!
Download entire TAIPEI Introduction to TAIPEI