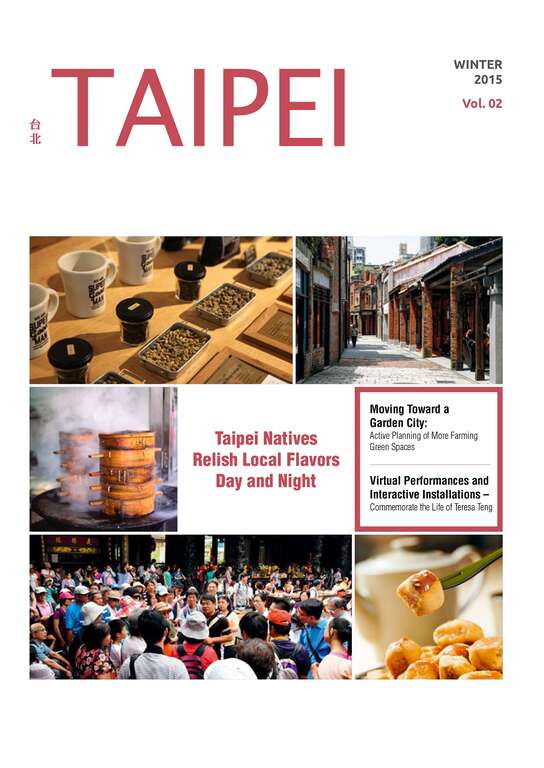 Taipei is both a classical and modern city. Everywhere there is beauty, providing inspiration for many literary writings. Stroll along thoroughfares, lanes and alleys to encounter historical beauty. Saunter through areas of natural elegance embraced by mountain and water landscapes. We invite you to experience all of this together!

This year, based on the concepts of "open government and civic participation," the Taipei City Government transformed budget numbers into images for the first time to give the public a clear understanding of them and allow them to participate in public affairs, jointly promoting the city's continued progress. In order to revive Bangka's "glory days," the city government integrated transportation, education, guided tours and social welfare to implement a comprehensive plan and organize "Bangka Historical Tours". These tours, held on weekends, bring you into contact with both the old and the new, recalling an age of unpredictable change a century ago. At the same time, they introduce local food specialties and increase the allure of revitalized Wanhua.

Based on Taipei City's convenient YouBike service and friendly cycling environment, it fought for and won the right to host next year's Velo-city Global Conference. This event will be connected with the Taipei International Cycle Show and Tour de Taiwan to present the strength of Taiwan's bicycle industry. "Bravo," the Formosan black bear mascot for the 2017 Taipei Summer Universiade, was also officially revealed. The slogan "For You, For Youth" conveys Taipei's youthfulness and vitality to the world and is a welcome to athletes from around the globe.

Over the past few decades, Teresa Teng's songs have held a legendary position, as if nothing could ever replace them. Her voice, sweet and gentle, is full of heartfelt emotion, symbolizing the old days of "Sweet as Honey". The Discovery Center of Taipei is presenting "The Return of Teresa Teng Memorial Exhibition." In addition to displaying items related to her life, such as album covers, a qipao worn during a performance, postage stamps and posters, a Hollywood visual effects production house has been invited to use virtual reality technology to recreate Teng's charming demeanor.

Dadaocheng's row house architecture and historical atmosphere are testament to Taipei's development and prosperity. In this century-old settlement, creative and cultural industries are bringing new life and connecting with the traditional to create a different cultural style. In October of this year, the Tua-Tiu-Tiann International Festival of Art was organized by a civic group. Through art, exhibitions, performances, and marketing activities, the dreams of many young people are condensed in one place. Local culture is slowly being revived, with stories of the old city on everyone's lips. With the addition of many new city elements, an even richer Taipei Story is being compiled.
Download entire TAIPEI Introduction to TAIPEI