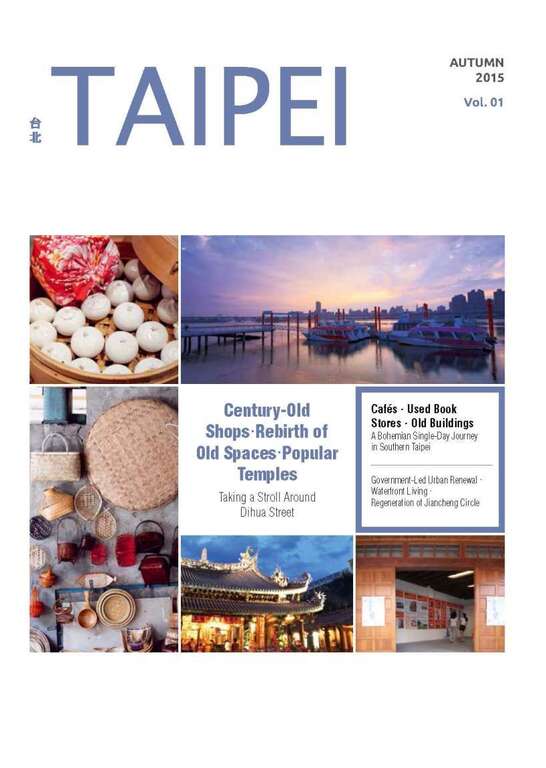 A Rebirth Extending From Old Urban Areas to Waterfronts

Discover Taipei is back with a new name! For over 18 years since its debut in September 1997, Discover Taipei has accompanied countless domestic and international tourists on their Taipei journeys. Together, we have witnessed the city’s development as history has continued to unfold. With an all-new atmosphere felt in today’s Taipei, we decided that it was time to switch names, and we chose something simple and direct: TAIPEI. We will cover municipal administration, culture and tourism as we share with you the wonders of the city.

This quarter’s issue of TAIPEI is centered on Datong, a district in western Taipei. Blessed with an accessible harbor, Datong was the earliest part of the Taipei Basin to be developed. By the 19th century it had begun its rise as a bustling commercial area which was rich in culture and education. In later years, however, as industry and commerce spread throughout Taipei, rapid decline beset Datong. In order to reverse this trend and bring about a new era of revitalization and regeneration in Datong, the Taipei City Government is using waterfront recreation and green transportation as core strategies for regeneration. As government-led urban renewal sparking local change, culture, tourism and specialty commercial districts are changing the overall contexts of entire districts.

Urban aesthetics can be expressed on a micro-scale, as can be seen in paintings of stone lions and incense burners on transformer boxes. The Taipei City Government recruited five artists to undertake this transformation of transformer boxes in Dalongdong commercial district in Datong, by adding local religious and traditional cultural pictures to what had been stark gray public works. In addition to describing these changes, we also introduce century-old shops, regenerated spaces and popular temples so that you can witness the charm of the city’s old streets.

We also suggest some great activities, such as heading to one of the city’s parks or riverside areas and laying down a mat for a picnic! Picnicking is especially fun if you have children, who will love the chance to enjoy the outdoors as you relax and take in the beauty of the city. Also, do you know where the cultured youths of Taipei like to hang out? In Gongguan in southern Taipei there is a strip of unique cafés and secondhand bookstores, such as Ryou Café, Kishu An Forest of Literature and Jiu Xiang Ju, which are rich in culture and highly worthy of exploration.

If you are preparing to make a trip to Taipei and wondering where to stay, remember that cheap short-term rental apartments and B&Bs in the city are illegal. In order to avoid potential building and fire code violations as well as possible consumer disputes, we recommend that you check either the Travel.Taipei or the TaiwanStay websites to find legal accommodation that can ensure a great stay. Meanwhile, the Universiade Taipei 2017 will not only raise the bar for athletic quality and culture in Taiwan but also serve as an important milestone in the promotion of the Taipei brand. In this issue, we have exclusive interviews with the CEO and the deputy CEO of the Universiade, so you can join us in watching the transformation of the city take shape.

On this note, I would like to extend a warmhearted welcome to Taipei!
Download entire TAIPEI Introduction to TAIPEI