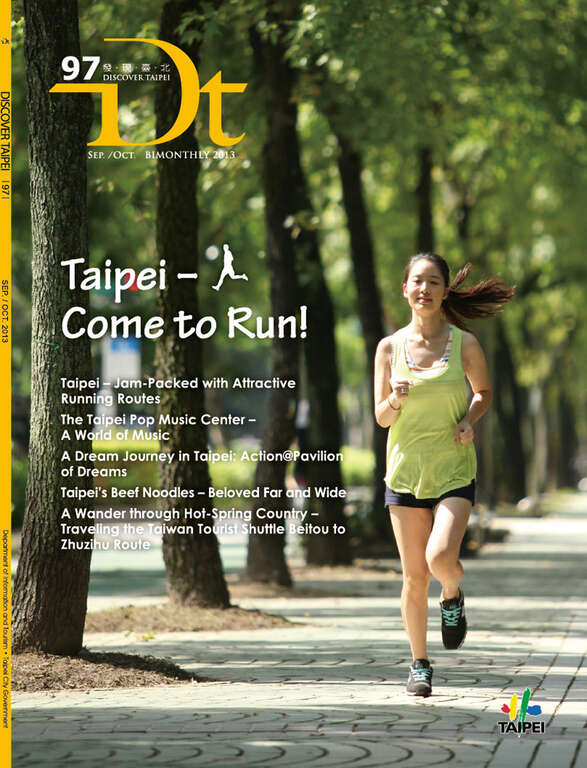 A fever for jogging has taken hold of Taipei. Our special theme of this issue is “Taipei – Come to Run!” where we introduce riverside parks along the Dadaocheng section of the Tamsui River and the Jingmei River, Jiannan Road, and other running routes, as well as the sights you’ll see along the way.

If what you like best is exploring new places, come discover the Taipei Pop Music Center, a

new Taipei landmark scheduled for 2016 being constructed in the Nangang District and eagerly awaited by the pop-music world. The new Eco Corridor at Treasure Hill and the relaunched Pavilion of Dreams at Taipei Expo Park will bring you great satisfaction with their natural beauty and high-tech smarts.

The annual Taipei International Beef Noodle Festival, an event for which beef-noodle

aficionados drool with anticipation, is on the city stage this September and October. We make special visits to six of Taipei’s most popular beef-noodle shops in our Taipei’s Best Foods & Gifts section, giving you a taste of delicious recipes that have been passed down through the decades. This is also the season for one of the big three festivals of traditional Chinese culture, the Mid-Autumn Festival, and come with us on a tour of creative new mooncake inventions that would become some of your best Taiwan souvenir purchases.

There are a number of relaxed ways to tour from Beitou to Yangmingshan, and a new option is the Taiwan Tourist Shuttle Beitou – Zhuzihu Route. A bus ride offers comfort and carefree pleasure. The joy of festivals awaits you in other locations in this autumn with such richly varied cultural happenings as the Taipei Confucius Temple Culture Festival, Dream Carnival, Beitou Hot Spring Museum Centennial Celebration, Taipei Hot Spring Season, and Taipei Hakka Yimin Festival.

Design and arts are ever-present in Taipei life, and this autumn features a number of major

Take the road to simplicity for your Taipei autumn explorations, putting on your running shoes and following your heart to get a feel for this city’s unique pulse!
Download entire TAIPEI Introduction to TAIPEI