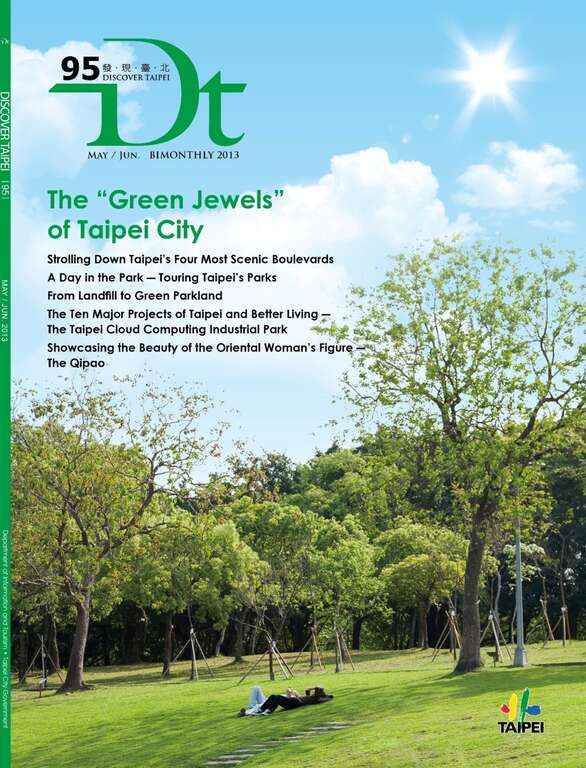 The “Green Jewels” of Taipei City

Taipei is a place of lovely, leafy avenues and attractive green parks. If looking for a quick

nature escape while in the midst of this big, bustling city, there’s no longer any need to

head off to out-of-city locales – May and June, as spring becomes summer, is prime time to

Our theme this issue is “The Green Jewels of Taipei.” We introduce the city’s four leafy

main avenues, various parks of unique personality, and landfills transformed into green parks, revealing just how much green beauty is out there waiting to be explored.

In our Taipei New Images department we show you a Taipei City alternative landscape,

a Mobile Museum in Xinyi District that lends an artistic atmosphere to the streets of the city.

Elsewhere, work on one of the new Ten Major Projects of Taipei, the Taipei Cloud Computing Industrial Park, has now been launched. Taipei is systematically building Taiwan’s version of Silicon Valley, from basic infrastructure to software services.

The qipao is one of the classic “impressions of the East” in Western eyes. In our In-Depth City Culture Explorations section this issue we show you how the qipao has changed with the times and introduce some of Taipei’s most venerable qipao shops. In our Mapping the Taipei Lifestyle gallery we go on a day-tour to the Muzha and Jingmei communities, traipsing the old streets on a nostalgic walk. We also introduce the age-old folk traditions associated with the Dragon Boat Festival, one of Taiwan’s three big annual traditional festivals, and tell you all about the Baosheng Cultural Festival, a splendid annual religious carnival.

Taipei is seeking World Design Capital status, and the rich diversity of its arts and culture

activities splendidly showcases the city’s cultural-creative energy. The Showcase of Taiwan’s Future Design Stars, shows you how this year’s crop of graduating design students are bringing new blood and new creativity to the design community. Elsewhere, as part of its 30th anniversary celebrations the Taipei Fine Arts Museum is staging the special TFAM Before and After 1983 exhibition, and the upcoming 15th edition of the Taipei Film Festival will (as always) bring you the best new cinematic artworks from around the globe.

Summer is coming. It’s time to seek the shade under the city’s leafy trees and enjoy the

season’s diversity of arts and culture performances. There’s no better way to get to know