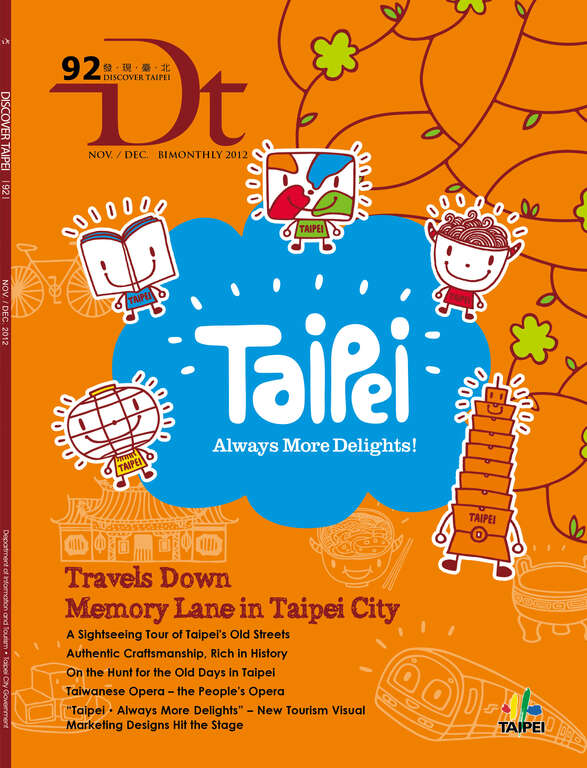 High-rises and skyscrapers, roads packed with vehicles flowing like rivers, great numbers of people moving along in never-ending streams…. These are the first impressions that newcomers usually get of Taipei. But stop for a moment, take a closer look around, and you’ll find that this fast-paced city gripped by modernization fever has a rich cultural heritage and a wonderful diversity of style.

Our theme this issue is “Travels Down Memory Lane in Taipei City,” and in the pleasant cool of the early winter we serve as your time machine, taking you down the city’s old streets, visiting old master craftsmen practicing their skills, and exploring nostalgia-laden antiques in a return to Taipei’s past.

In recent years many old buildings that have been witnesses to Taipei’s bustling, flourishing past have been fixed up and transformed into cultural-creativity hubs as part of the city’s urban renewal project. In our Taipei New Images department we introduce Urban Regeneration Stations in the Dadaocheng community, and see how rare tropical plants have been given a home amidst the heritage architecture of Huashan 1914 Creative Park, giving birth to a new space where cultural-creativity performances and eco-preservation are combined.

The city always stages a rich program of activities to celebrate the end of another year, and in our Mapping the Taipei Lifestyle section we ride the Taipei Metro’s Wenhu Line on a tour during which you can enjoy a nature walk, go shopping, and enjoy a grand fireworks spectacle. A can’t-miss annual party held on December 31 is the Taipei New Year’s Eve Countdown Party, which takes plae at Civic Plaza, and inside we tell you about all the colorful activities that will be going on, and about the thunderous midnight Taipei 101 Fireworks Show that caps the party. In a special treat, we go behind the scenes to show you about all the hard work and the tricks of the trade that make the pyrotechnics extravaganza such a big success.

Meanwhile, as the curtain comes down on this year they are going up on a sparkling line-up of large-scale annual design, cultural arts, and film events. Among these are the 2012 Taipei World Design Congress, Golden Horse Film Festival, Urban Simple Life Festival, and Taipei Original Festival. Though the cool of winter has arrived, these celebrations of all things artistic keep the city heated up.

As the clock winds down on 2012, we head back into the Taipei of yesteryear, celebrate the arriving New Year, experience the beauty of Taipei’s proud public display of old and new –

and finish by saying how happy we are that you’re here. Happy New Year to you!
Download entire TAIPEI Introduction to TAIPEI