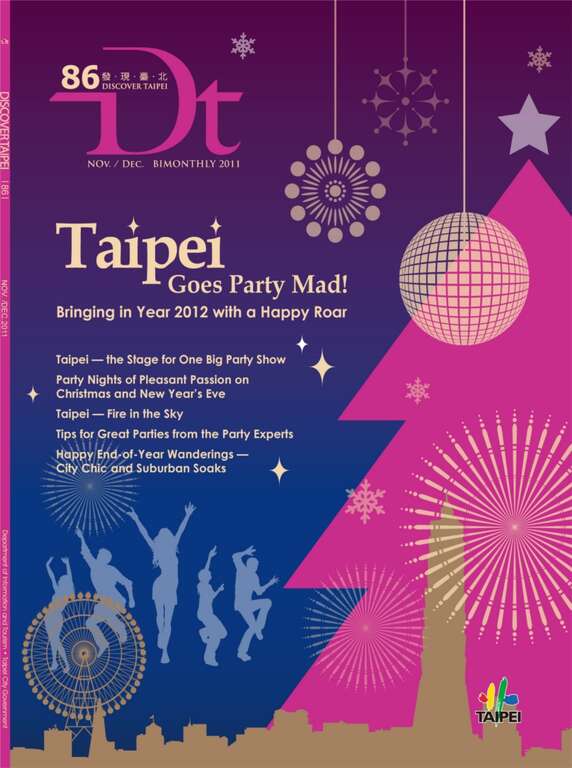 Bringing in Year 2012 with a Happy Roar

Another year will soon have its denouement. Looking back at the Taipei year that is soon to forever be of the past tense, this can be said to have been a year of“big things” —international gatherings of colossal size and ambition. The 2010 Taipei Int'l Flora Expo, 2011 Taipei World Design Expo, Taipei Arts Festival, and the full year of ROC Centenary celebrations were all great successes. To say goodbye to what has been a milestone year in the city's history, we have chosen“Taipei Goes Party Mad!”as our theme, for the people of this city have worked hard this year and deserve some rollicking good fun at Christmas and New Year's Eve to finish off this year of great memories with a Big Bang.

You're thinking, “Where should I be at Christmas and New Year's Eve? Where's the biggest shindig?” Warm and festive Christmas gatherings are being put together all around the city, and on New Year's Eve, hundreds of thousands of people will be gathering with you before Taipei City Hall for the roaring annual countdown party and fireworks. Like many others, you can enjoy the city-dominating fireworks from more distant party spots on Taipei's outer edges, or you can plan your own original theme party event. Taipei's slogan is to come “explore the endless possibilities,”and at year-end the possibilities for rip-roaring revelry will seem just that—without limit.

The Xinyi Commercial District is filled with gleaming architectural gems, and even more sparkling jewels have come online this year. We take you on a tour to see the new stars, a cluster of top-flight international hotels and the ATT 4 Fun cultural-creativity emporium. Then, in a complete change of pace, we head away from the ultra-modern into the mystical, timeless world of Chinese divination, exploring the city's venerable clusters of divination experts. Time to find out what the year to come has in store for you—and, perhaps, the rest

of your mortal existence!

Watching the fireworks spectacular on New Year's Eve from a restaurant with a strategic vantage point is a great idea many have each year. Whether in the outskirts in Yangmingshan or Maokong, or right downtown near Taipei 101, you're guaranteed a super combo visual and food feast. Another splendid food idea is to head along Taipei's streets in search of the piping-hot sweet treats traditionally eaten in winter, which chase away the season's chills, each bowl loaded with warming happiness.

We've also mapped out a couple of relaxing day tours for you to take as the sun sets on 2011, one an easy meander of the city's East District, the other a soothing dip into the Beitou hotsprings resort area. This season is also bubbling with top quality cultural arts happenings, such as the Golden Horse Film Festival and repertory theater at Chiang Kai-shek Memorial Hall, and we give you a special sneak preview.

Winter is nigh, and spirits are high, for the time has come to say goodbye to 2011, a fine year, and pop the cork on a brand-new year of bright and bubbling potential. Let the party begin!
Download entire TAIPEI Introduction to TAIPEI