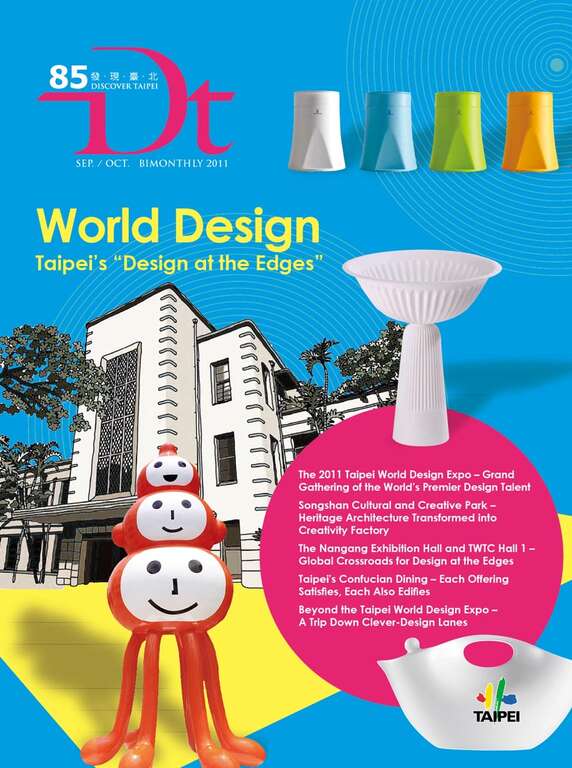 The arrival of autumn generally means the arrival of cool, crisp air. But not this year, not in Taipei, where things are instead set to heat up. Why? The International Design Alliance (IDA) Congress is coming to town. This is not only the first time such an important large-scale event is being staged in Taipei, but also the first time such event is being staged in Asia. The world's most illustrious names in the world of design are headed this way, from 47 countries, and the city will soon be sizzling with an outpouring of dynamic cutting-edge creative energies. This will be the last big event for the city on the international stage in 2011, another powerful statement of its hosting abilities after the sparkling success of the Summer Deaflympics Taipei 2009 and the 2010 Taipei Int'l Flora Expo—and you'd be wise to be on hand for the creative fireworks!

In honor of this grand international occasion, we've chosen the theme“World Design –

Taipei ‘Design at the Edges’”for this issue. You'll visit the three major sites of the Taipei World Design Expo: the Songshan Cultural and Creative Park, with exhibits for international industry professionals, the TWTC Nangang Exhibition Hall, where the stress is on design interchange and the incorporation of the latest technologies for positive living, and the Taipei World Trade Center's Hall 1, with cutting-edge design creativity on glorious view. All the best in creative design from all around the world is meeting at the Taipei“Design at the Edges”crossroads.

Beyond this key event for the still young century, there's also much else going on that will add to Taipei's always culturally rich autumn colors. We speak of the annual Taipei Hakka Yimin Festival, the authentic age-old Taipei Confucius Temple's honouring one of history's key cultural figures, and the Shilin International Cultural Festival, celebrating this district's role as a cultural crossroads. If your desire in Taipei is to nestle up as close as possible to local life, there are no more golden opportunities than this one.

Have you ever heard of“Confucian food”? Trust us, there is such a specialty, for we will be taking you on a grand Confucian food culinary tour. Each dish is a lesson on one of the greatest Confucian philosophers that have guided Chinese history. Remaining on the subject of cultured taste-ful exploration, we then savor the joys of the annual Taipei Coffee Festival, visiting cafes of the most independent character and sipping creative coffees rich in personality.

radiant light to this ebullient metropolis, but in fact smaller, more quietly expressive lanterns of design expressiveness radiate through the city's streets and lanes through all seasons. We'll take you on an exploration of the East District's lanes and alleys and their many shops of iconoclastic—and sometimes bombastic—design declaration, another journey through the city's unique old-fused-with-new urban regeneration projects, and a sojourn underground to view the Taipei Metro Mall's long necklace of coruscating installation-art gems. There's also a long autumn line-up of special events to take in, among them the Taiwan Avant-Garde Fashion Design Exhibition, Taiwan Designers' Week, and the Guandu International Outdoor Sculpture Festival. You'll find no more stimulating period of cultural ferment than this, wherever your travels take you!

Taiwan's long pent-up creative energies are now bursting forth, the flow ever increasing rather than ebbing. If“all the world's a stage,”the globe's biggest creative-expression stage this autumn may well be Taipei City. So where will you be? Dare you miss out?
Download entire TAIPEI Introduction to TAIPEI