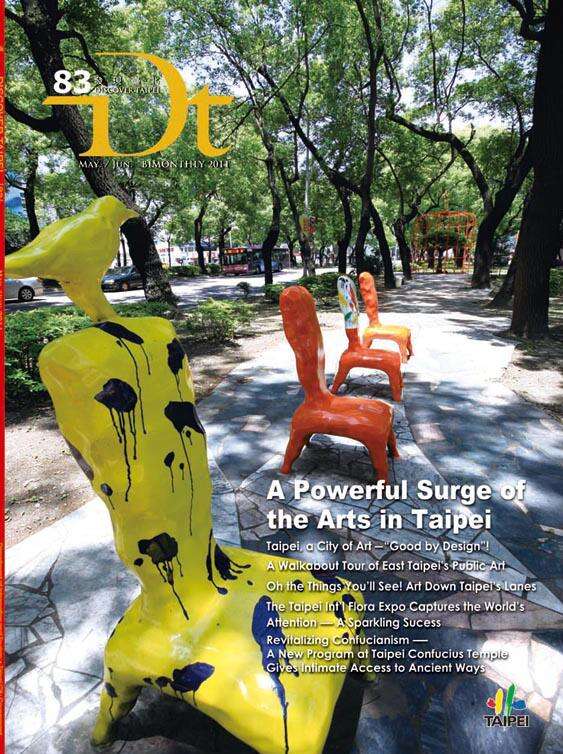 A of the Arts in Taipei

Taipei has been a point of great interest on the world map of late, with 21st Summer Deaflympics Taipei 2009, the Taipei Pavilion at the Expo 2010 Shanghai, and the 2010 Taipei International Flora Expo. The global spotlight will continue to shine on the city when it hosts the international 2011 IDA Congress Taipei in the coming months, a grand platform for the city's vibrant prowess in design and artistic creativity. With its public art in very public places, tucked-away arts spaces down side streets, and thrilling scene for live stage arts, it is evident the local urban lifestyle is artistically exuberant.

Our theme this issue is“A Powerful Surge of the Arts in Taipei.” We feature the large-scale IDA Congress and its main events, the International Young Designers' Exhibition (YODEX) starting in May, 2011 Taipei Good Design photography contest, which looks at Taipei from some very unusual angles, and public artworks such as the Design Bus and Master D. There is a very full program of art-world things for you to do, and the rewards are great.

We also get an early glimpse of the magnificent Taipei Performing Arts Center, which will serve as a grand platform for Taipei arts on the world stage in the not-too-distant future. This is a building that is a work of art in itself, adding to the richness of the public art you see along the city's streets and in the warm and inviting arts spaces hidden away down its cozy lanes and alleys. These await your discovery, and you'll find each a charming revelation.

The Taipei International Flora Expo has come to a close, an extravaganza that has been a resounding success, garnering many local and international rewards and honors. We offer a retrospective, and also report on the future of the pavilions post-expo, many of which will continue to entertain you.

When this city's creative culinary scene meets its creative arts spaces, what sparks fly? Daring, unique treats with iconoclastic design flair. On another front, the breakfast scene, we take you on an excursion through tried-and-true local-style breakfast joints and point out where to get your Western-breakfast fixes. There's no better way to get a taste of Taipei!

The onset of Taipei's bustling summer means it's time to sit yourself down to a feast of festivals and other events. The Baosheng Cultural Festival, Revitalizing Confucianism program at Taipei Confucius Temple, International Wu-Wo Tea Ceremony and Tea Culture Festival, Taipei Film Festival, and Eye of the Times—Centennial Images of Taiwan exhibition are all ingredients in a great cultural ferment going on in the city, and you'll want to be on hand to drink your fill!
Download entire TAIPEI Introduction to TAIPEI