Located across from Daan Forest Park on Xinsheng South Road Section 2, the Taipei Grand Mosque is a municipal historical site that is celebrating its 58th birthday this year. Never had a chance to explore the building? The opportunity is finally here!

To celebrate the 58th anniversary of Taipei Grand Mosque, there will be fairs and exhibitions running from April 28 through 29. These include a food fair spotlighting Muslim delicacies, papercutting craftwork, Arabian garments, mosque history exhibition, and guided tours of the building. Visitors will be able to acquire hands-on experience on Islamic culture.

According to Taipei Grand Mosque president Feng Tung-yu, vendors invited to set up booth will offer a wide range of snacks and delicacies which varies from standard selections, providing visitors an opportunity to try out different types of entrees. Some examples include favorites such as shawarma, Xinjiang-style pilaf, naan, and Southeast Asian satay, as well as variations of curry from countries such as India, Indonesia, and Pakistan.

In addition, the organizers have also invited Ma Jun Ahong, a well-known papercutting artist from Gansu Province in mainland China, to demonstrate his skills live at the event. The merging of Chinese papercutting with Arabic art elements creates a very different kind of style with Islamic flavors.

The exhibition on Taipei Grand Mosque’s history, guided tours, Arabian garment dressing sessions, and Halal certification product expo are sure to make the visit worthwhile for the public.

The organizers noted that the exhibitions are staged inside the mosque. Admission is free of charge. The showcase will take place April 28 and 29, from 10 AM through 8 PM. 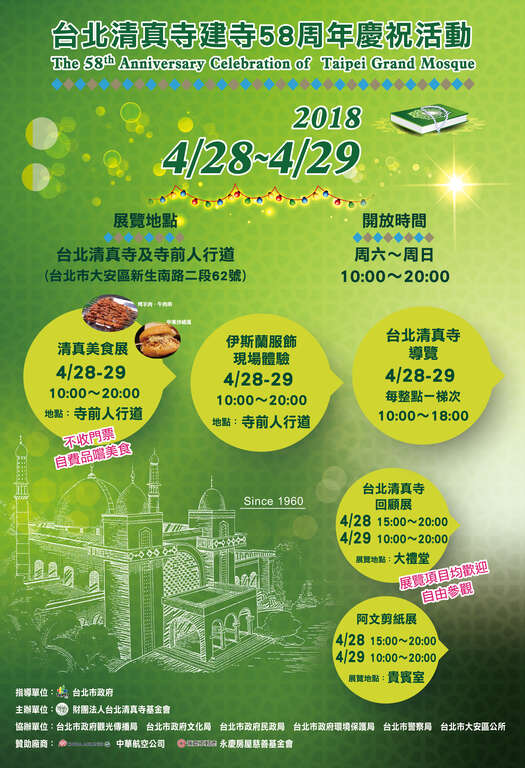