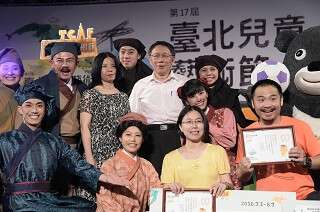 Mayor Ko Wen-je presided over the opening ceremony for the 2016 Taipei Children’s Arts Festival at Daan Forest Park in the evening of July 1.

During his address, the mayor noted that in addition to inviting the public to come and watch the performances, one of this year’s highlights will be audience participation in the creation and acting during the events.

Noting that the event has been held annually for the past 17 years, Ko remarked that many kids probably grew up attending the event every year. Citing the theme of 2016, Ko mentioned the old English saying of “You’re limited by your imagination,” meaning that the more imagination one has, the more he or she can do.

With over 28 groups taking part in the performances, the festival will organize over 100 show sessions this year. Furthermore, he noted that art is not only for people to watch, buy it is also something for participation by the audience. He hopes that people will learn more about toleration and open attitude through participation.

At the end of his speech, he expressed his hope that kids will be able to enjoy this year’s event taking place from July 1 through August 7.