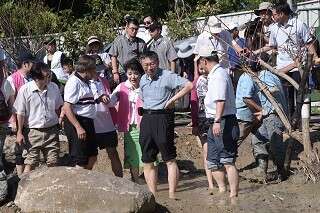 With raising public awareness on the construction of eco ponds for the purpose of firefly conservation, the city government held the “Come and Walk on Mud” activity at the planned site for the small eco pool at Daan Forest Park in the afternoon of August 22.

Mayor Ko Wen-je noted that the parks, in addition to being places of leisure for the public, are also ideal spots to conduct environmental education, given the rich selection of plant and animal life in this classroom of nature. While enjoying the fruits of years of conservation efforts, the public can also learn about how the firefly habitat was created from scratch.

Public Works Commissioner Pong Cheng-sheng noted that fireflies were reintroduced to the Daan Forest Park in April, thanks to the coordinated effort between the agency and the Friends of Daan Forest Park Foundation. To further boost the firefly population in the park, the agency is working on the construction of small eco ponds to further expand the insect’s habitat.

He invited adults to come and relive the experience of waddling through mud, while young kids can experience a different kind of amusement which is different from video games and mobile phones. This will also invite citizen participation in firefly repopulation effort, building a park which befits the expectations of the public.

The outstanding results of local firefly conservation efforts have helped Taipei secure the hosting rights of the 2017 International Firefly Festival. The successful repopulation efforts implemented at Daan, Cui Lake, and Rongxing Garden parks will provide key knowhow to firefly experts and city representatives from around the world.