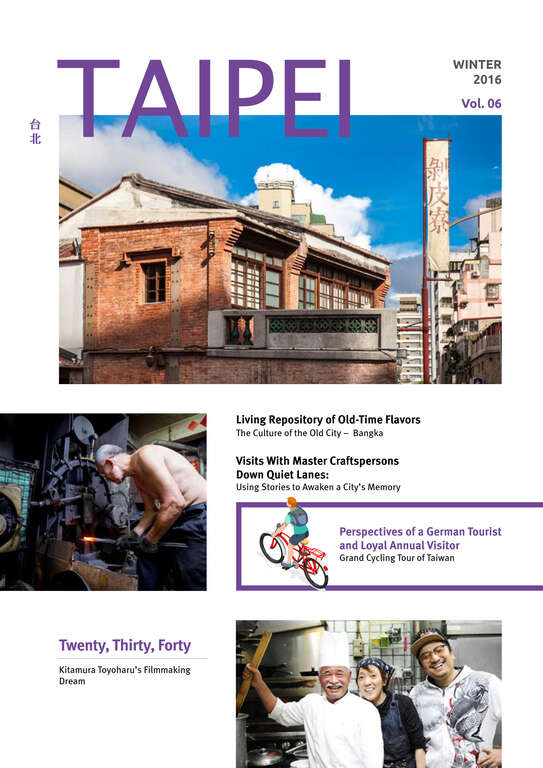 Navigating the City With a Literary Flow

Under the brilliant contrast of endless poinsettias, the Taipei of winter seems ablaze. The radiant red captures the warmth and passion of this city under its blanket of chill.

In 2015, Akira Higashiyama’s novel Ryu (“Flow”) won Japan’s prestigious Naoki Prize. Taipei is the stage for this novel’s story, immersing the reader in scenes of yesteryear that inspire waves of nostalgia. Under Akira’s pen, the old China Plaza’s wondrous homestyle aromas from different regions of China drift by once more, and many readers are transported back to the days when they came here to get school uniforms made. Akira lived for a time on Guangzhou Street, and the Longshan Temple and Ximending area have thus left vivid impressions on his life. First love blossomed for him in the Taipei Botanical Garden, and the bewitching old-time charms of the Dadaocheng neighborhood also fascinated him.

In this issue of TAIPEI we explore old and new Taipei through literary eyes and the footsteps traced in this novel. Many decades have passed, and the Longshan Temple in the novel remains shrouded in wisps of smoke from incense sticks. Huaxi Street and its foods remain a place of pilgrimage for tourists. Ximending is still a favorite haunt for the youth, with the addition of today’s many iconic arts and culture and trend-setting attractions. Akira’s beloved Taipei Botanical Garden is an urban oasis of exotic flowers and elegant historical buildings. Busy Dihua Street, with its intriguing old architecture, regional specialty goods, distinctive cultural-creative style, and inexpensive yet tasty cuisine, offers travelers an “authentic Taiwan” feast for both body and mind. In the pages to follow we take you on a tour of the city using Akira’s literary work as our guide.

In our fast-paced industrial society, the warmth of goods made carefully by hand is something both invaluable and irreplaceable. Expert craftspeople dedicated to preserving traditional handicrafts have carved a deep cultural heritage for Taipei, and made the Taipei story richer and filled with wonder. In this TAIPEI issue, we introduce Wanhua’s heritage bakeries, history-steeped teahouses, a venerable blacksmith shop, and Buddhist implement shops. The great panoply of local products may change with the times, but what is even more important than the passing down of traditions from one generation to the next – trustworthiness.

If you were to use handmade pencil and paper, do you think you’d feel differently? Who would think that once mastered, handmade paper can be used to develop paper necklaces and lanterns! A heritage maker of calligraphy brushes and ink can crossover to the production of cosmetic brushes, bringing new life to an old brand. Elsewhere, we explore the traditional art of decorative lantern making, each work a showcase of the skill involved, as well as the worlds of wood, tin, and pottery arts, which add zest to life.

Culture and creativity are the catalysts of a city’s kinetic energy. In this edition, we speak with Peter Zec, CEO of the world-renowned Red Dot Awards and founder of the World Design Capital project, who provides insightful observations on Taiwan’s design industry. We also spend time with Korean Mission in Taipei Representative Cho Baek-sang, whose term has just ended, and Japanese film director Kitamura Toyoharu, asking the two to share their Taipei impressions.

We’re now within 250 days of the upcoming 2017 Taipei Summer Universiade, and we specially share the stories of Taiwan national women’s volleyball player Wang Sin-Ting’s victory over a rare disease and world-class indigenous skater Sung Ching-Yang’s determination to overcome many obstacles. We invite you to give a rousing cheer for a successful Taipei Universiade!
Download entire TAIPEI Introduction to TAIPEI