ORIGIN
In 2003, SHIN KONG MITSUKOSHI XINYI PLACE began the "department store X art and cultural event" trend and held the "Drumming Festival" for the first time and now has entered into its 16th year. From being unknown to being well-known, it has gradually established itself as the most celebrated art and cultural event in the Xinyi District and has spared no effort in promoting cultural and performance art, so that department stores are not only a trendy shopping hub, but also a place bathed in the atmosphere of art. All the efforts over time were expended just so that more moving moments can be created for the customers.
Night of the Drum Soul
Return to the original purpose where the main character are the drums, in order to experience the historical evolution from the combat and rituals of ancient times to the performance art of today. Listen to the moving beats of three different themes (military, rituals, art) interpreted by 9 professional drumming groups of distinct styles. In this three-day performance, different drum cultures during different stages are presented gradually to touch the senses and soul of the listener, prepare to be mesmerized and stunned by the "drum culture"!

Military: Drumming to boost the morale of the soldiers, showing the power and magnificence of an indefatigable army.
Rituals: Drumming that awakens the soul to pass on respect to the heaven and earth, experience the rites and ceremonies of different cultures.
Art: Mesmerizing drum beats that overturn traditions and culture, creating a new drumming art. 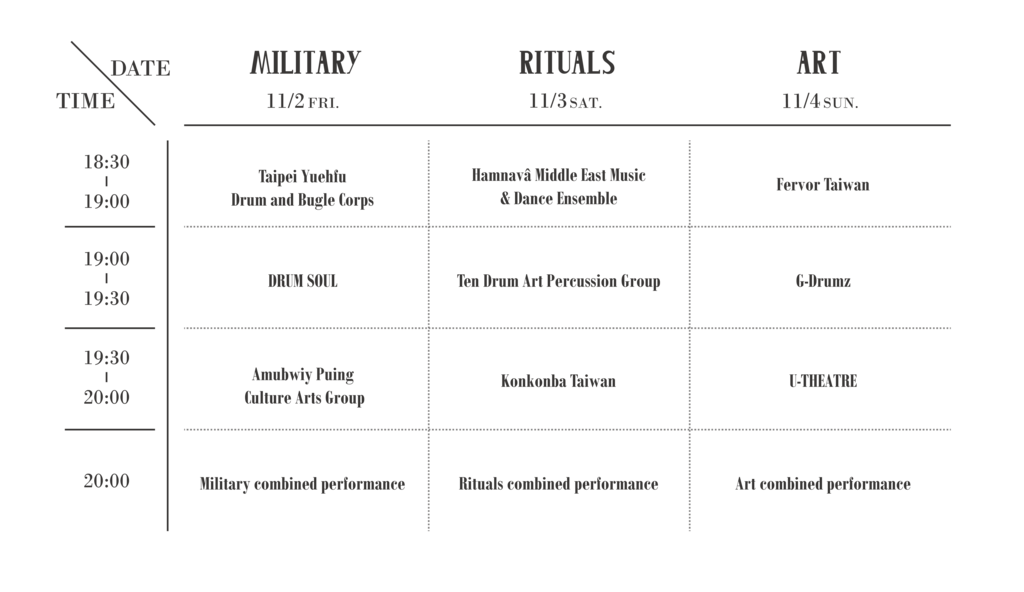 First Night: Military
Taipei Yuehfu Drum and Bugle Corps
The only drum and bugle corps that is not affiliated with a school; the first drum and bugle corps that incorporated bugles, drumming, and visual performance; many-times winner of the "Drum Corps International" North American tour; basic instrumental performance or the flag and gun dance skills paired with professional marching techniques and formation change concepts that fully present the artistic value of the drum and marching performance.

DRUM SOUL
Taiwan-based Taiko performance team that combines Taiko instruments with modern music to create diverse and innovative Taiko percussion performances. They are permanently based at DOZO ‧ Taipei where they perform. The team members come from different performance backgrounds and the group draws the different interpretation techniques and life experiences from each member, where they are dedicated to offering a completely different performance style to that of traditional drumming and Taiko drums.

Amubwiy Puing Culture Arts Group
An outstanding performing arts team of the Ministry of Culture uses the conflict and incorporation of traditional culture and modern trends to create beautiful and elegant aborigine music and dance. Since its founding to now, the group has given over 500 performances at events such as local and overseas art festivals, as well as cross-strait cultural exchanges. Their lively and moving music and dance has brought a new strength and vitality to the culture and art of the Taiwanese indigenous people.

Second Night: Rituals
Hamnavâ Middle East Music & Dance Ensemble
The first art ensemble in Taiwan whose music is based on the music of the Middle East and the lands along the Silk Road, their performance style combines the various rhythms and tones of the Middle East. They are frequently invited to perform at various major at and cultural events. Their music includes the mysterious and elegant classical Arabic style to the complex tempos of Turkish dance and song, paired with expert dancers, the rich rhythms and melodies bring a completely different celebration of world music.

Ten Drum Art Percussion Group
An internationally-renowned percussion group that uses the elements of local Taiwanese themes, sceneries, and diverse ethnic drumming to integrate the drum culture of Taiwan and the rest of the world. They have been nominated for the Grammy Awards, the Independent Music Awards of the US, and the Golden Melody Awards of Taiwan. They are dedicated to their purpose of passing down the legacy and the creation of local percussive arts, and have created a diverse yet local, as well as forward-looking drum culture.

Konkonba Taiwan
Leader of African drums in Taiwan, this African Manding drum ensemble made up of family members received the official recognition of master drummer Mamady Keita in 2009. The lively rhythm, spirited singing, and animated dancing awaken the listeners' senses and soul so that people can find their primal and happy self through the joyous African music.

Third Night: Art
FervorTaiwan
The Taiwanese soul that never gives up! An integration of multiple cultures and arts, as well as the combination of imagination and folk customs have brought together the rich and fascinating grassroots culture of Taiwan. The actors are the medium that are used to tell the stories of Taiwan and to present the arts of Taiwan, to demonstrate the passion and loyalty to this land. This is the first performance arts group that won first place in a Chines talent show.

G-Drumz
A youth percussion group from Taipei that has inherited the Japanese Taiko drum tradition and refined modern jazz drumming techniques, their performance incorporates oriental wind instruments, martial arts moves, dance rhythms, and theatrical elements. They are a popular performance group that has appeared in major drum art events, showcasing strength and beauty through their limbs and blazing across the stage with their passion, to demonstrate the pride of the combined Asian and Western percussion.

U-THEATRE
This is an internationally renowned art and cultural group that has traveled all over the world, they are highly praised both locally and abroad. Their aim is to "learn to meditate first, then learn how to drum", they are dedicated to presenting the most refined artistic qualities and are committed to walking on a path of performance arts that combines "Tao- The pursuit of the fundamental meaning of life" and "Art - the practice of life aesthetics".