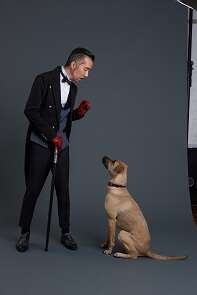 The Animal Protection Office (APO) has launched a campaign to promote rabies vaccination by inviting local emcee and writer George Chang as the pitchperson. Between March 1 and April 30, advertisement light boxes at five MRT stations across Taipei will spotlight images of George and his furry companions to promote the project.

Staring July 1, pet owners in Taipei will be required to take their dogs, cats, ferrets, and Formosan gem-faced civets for rabies vaccines every year at the designated veterinary institutes certified by APO. After having their furkids inoculated, pet owners will receive a certificate and collar tag issued as proof of vaccination.

According to statistics provided by Centers for Disease Control, 16,000 cases were reported in 2016 involving people being bitten and scratched by animals. The World Organization for Animal Health (OIE) indicated that rabies resulted in more than 70,000 fatalities around the world each year—99 percent of which are related to canine or feline bites.

Despite the alarming figures, APO reckoned that a 70 percent rabies vaccination coverage rate can effectively reduce the risk of human-animal transmission. A shot costs only NT$200, but offers protection against the viral disease for domesticated animals.

George Chang, who appears to have established an amicable relationship with the cat and dog during the photoshoot, urged the public to support the campaign as it is the least pet owners can do to safeguard the health of their loved companions.