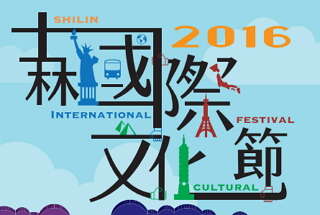 Do you recall the exciting performance by Taiwanese opera troupes and the heated battle of glove puppetry characters during temple festivities?

To promote local Taiwanese artistic culture and to celebrate the establishment of cultural institutes such as the Xiqu Center of Taiwan and the Digital Arts Center in Shilin District, the Shilin District Office has invited the Hong Puppet Theatre to perform at the 2016 Shilin International Cultural Festival.

The district office also arranged lessons on Taiwanese operas, allowing professional and enthusiastic performers to educate the public through teaching and performance. Hopefully, this will introduce a new wave of vitality to traditional Taiwanese performing arts.

The Hong Puppet Theatre comprises young performers who are passionate about glove puppetry. Their love for traditional performing arts and determination to work together to promote the medium helps bring new energy to traditional Taiwanese glove puppetry. The group has performed at events and schools across the island, winning applause from the audience. For the 2016 Shilin International Cultural Festival, Hong Puppet Theatre will stage a show at the Qiangang Park in Shilin District starting at 4 PM on October 15.

The “Taiwanese Opera Hands-on Lesson” will take place at the tenth floor of Shilin District Office Building on October 22 and 23. Members from professional Taiwanese opera troupes will introduce participants to the art, as well as the stage and related actions. Participants will also have a chance to dress up in costumes and appear on stage to obtain hands-on experience of Taiwanese opera.

Shilin District Office Director Jiang Ching-hui welcomes the public to come to Shilin to watch the glove puppetry play on October 15 and learn about Taiwanese opera on October 22 and 23.