Old Man under the Moon to Visit Japan for Matchmaking Service 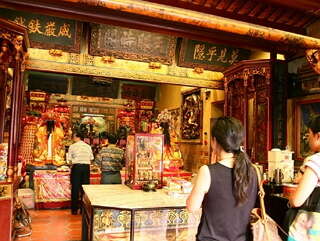 The matchmaker deity from Taipei Xia-Hai City God Temple will embark on a one-month long “business trip” to Japan on October 23!

According to Datong District Office, Taipei Xia-Hai City God Temple boasts possibly the most well-known deity of love and marriage in Northern Taiwan—Yue Lao, also known as the Old Man under the Moon. Completed in 1850, the temple serves as a local religious center for over 160 years, attracting followers from local and abroad. The temple’s Yue Lao has a reputation for answering worshippers’ prayer by helping lonely hearts find love, enjoying great popularity even among Japanese visitors.

The trip this year marks the third journey for the deity to Japan to provide matchmaking service. Okinawa Prefectural Government’s Representative to Taiwan will lead the procession to receive the Yue Lao as he begins the one-month-long overseas mission.

Datong District Office pointed out that the cultural exchange program is part of the campaign to promote the 2017 Taipei Universiade and strengthen bilateral friendship as Japan is one of the countries designated to be in the care of the Office during the upcoming sports event.

Taipei is set to host over 12,000 athletes from 167 countries in the international competition in 2017.

The district office assures residents that Yue Lao will be visiting Japan as a separate incarnation and the statue itself will remain in the temple. Believers can continue offering their prayers to the matchmaker god while learning more about the historical heritage of Datong District.