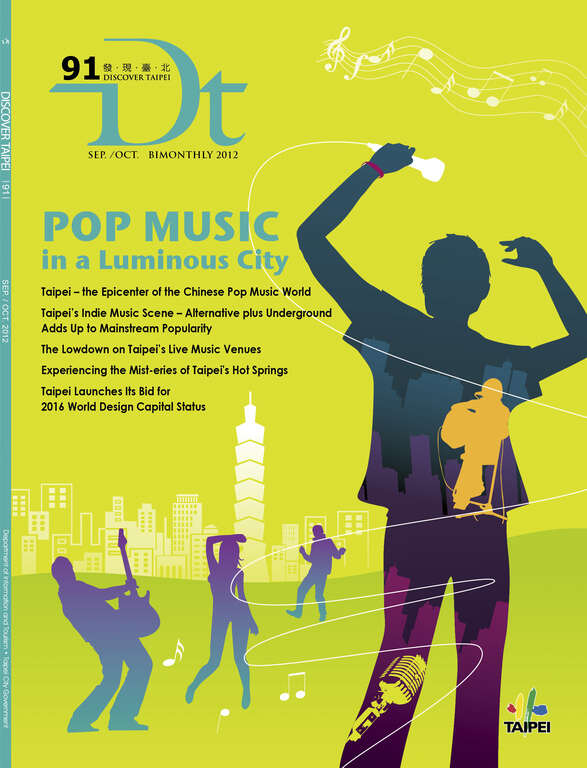 Pop Music in a Luminous City

Taiwan is a beacon of inspiration and leadership in the Chinese pop-music world, and Taipei its center of energy and operations. The city gives birth to popular music of great variety and individuality, and is also home to a great many performance venues, ranging from large public facilities to small live-show spaces which have served as an incubator for countless young musical talents. Our theme this issue is “Music Moves Taipei,” and inside we take you on a whirlwind tour of the city’s tremendous musical energies, introducing Taiwan’s pop-music evolution, its pop-music performance venues, and its indie-music creative base.

The cool days of autumn are now rolling into town, meaning it’s time for hot-spring soaking to soothe body and soul. In complement to Taipei Hot Springs Season we present “Experiencing the Mist-eries of Taipei’s Hot Springs” in our In-Depth City Culture Explorations section, giving you a detailed description of the springs of Yangmingshan and Beitou – their type, water quality, and the local hot-spring culture. Studying cooking with a master chef has become very popular of late, and in our Taipei’s Best Foods & Gifts unit we

bring you into four of Taipei’s kitchen classrooms to savor the joys of your own culinary creation. With the annual Mid-Autumn Festival fast approaching, we also explore new flavors in mooncakes with you – great treats for yourself, and gifts much appreciated by others.

The Ximending area is prime turf for starstruck young folk on the hunt for pop music idols. We serve as your guide on a “cool play” autumn day-tour of the enclave, checking out the diversified currents running through Taipei culture. The September-October season is perhaps the most animated on the local calendar of cultural festivals, and we raise the curtain on this year’s Shilin International Culture Festival, Taipei Confucius Temple Culture Season, Dream Carnival, and Taipei Hakka Yimin Festival celebrations. Something new will be constantly hitting the stage, in every corner of the city, and you’re warmly invited to dive into the cheerful excitement.

In its quest for World Design Capital laurels in 2016, Taipei has initiated a series of ambitious design activities. In September and October enjoy Taiwan Designers’ Week, the Taipei Design City Expo, and other attractions, a powerful collective showcase of Taiwanese designers’ prowess. Among the city’s not-to-be-missed events in its program of large-scale arts and cultural events are the 2012 Taipei Biennial, 2012 CNEX Documentary Film Festival, and Kuandu Arts Festival.

The best of in music, food, design, and arts – it’s this fusion of elements that makes Taipei wonderful, and all that’s needed to compose a moving autumn-touring symphony for you!
Download entire TAIPEI Introduction to TAIPEI