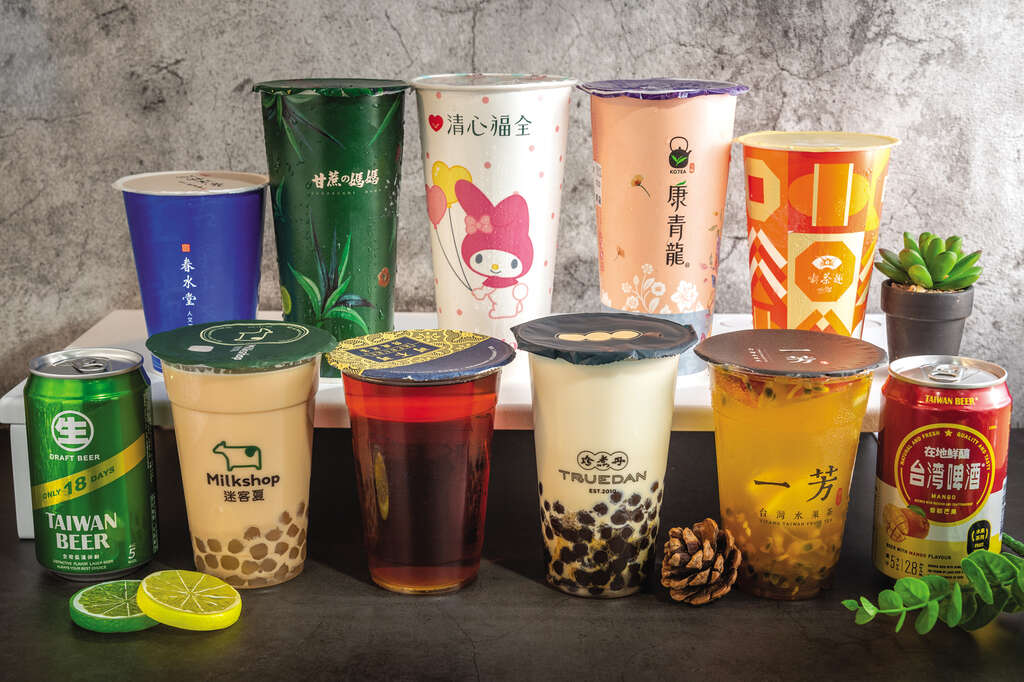 (Photo / Kavalan Whisky)Bubble milk tea was invented in 1980s in Taiwan and, over the past three decades, has proceeded to do nothing less than take over the world. While boba stands tall in the beverage world, other Taiwanese handmade drink stores are booming in Taipei as well, not to mention the growing market for craft beers and local whisky.

It’s no secret that the choice of beverage is a big part of daily life for Taiwanese. In Taipei, you can find drink stores one after the other, choc-a-bloc on a single streeet, offering countless new types of drinks and flavors for people to enjoy. TAIPEI has rounded up some of the best drinks you can find in our country’s capital. From freshly-squeezed juice to high mountain tea, here’s everything you need to know about Taiwanese drinks and the background of each unique store. 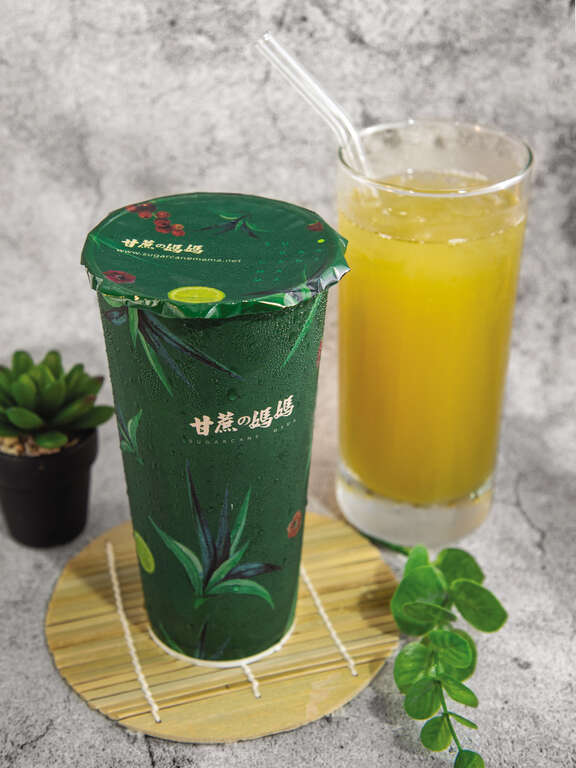 Sugarcane Juice
/ ganzhezhi 甘蔗汁 /
Alexander the Great’s General Nearchus once reported, “A reed in India brings forth honey without the help of bees, from which an intoxicating drink is made though the plant bears no fruit.” The mystical reed is actually sugarcane, commonly found in Taiwan. Freshly squeezed sugarcane juice can be easily found on street corners at the chain store Sugarcane Mama ( 甘蔗媽媽). Popular items also include sugarcane juice with milk and sugarcane juice with lemonade. As sugarcane is rich in antioxidants, it can be helpful in fighting infections and boosting the immune system. Now, grab a cup of iced sugarcane juice and raise a toast to good health! 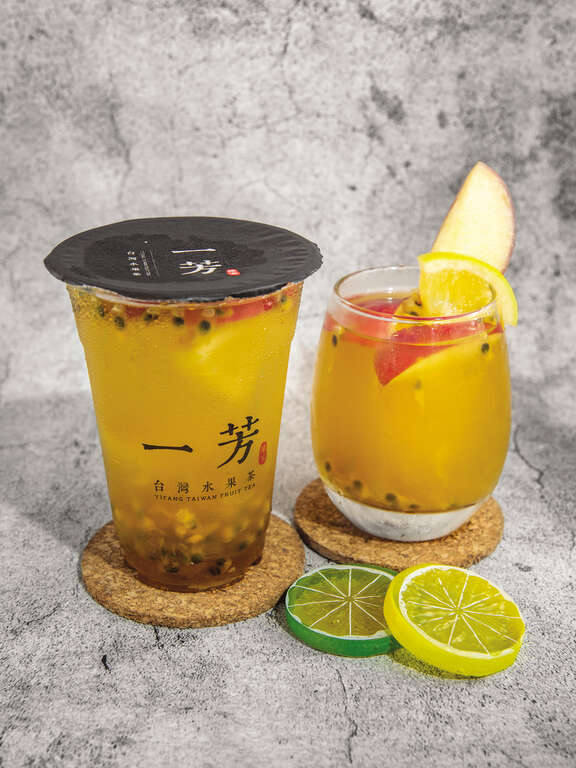 Fruit Tea
/ shuiguocha 水果茶 /
Yifang Taiwan Fruit Tea ( 一芳水果茶) specializes in mixing tea and juice. Does that make it tea or juice? Well, judge for yourself! Yifang fruit tea, the most popular item on their menu, contains of a bit of oolong as a base. With lots of passion fruit juice and actual slices of apple and orange in the cup, it’s almost like you’re eating a plate of fruit. One of their secrets is to add homemade pineapple jam to balance the sourness. Not too sour, not too sweet. It’s all about spring! 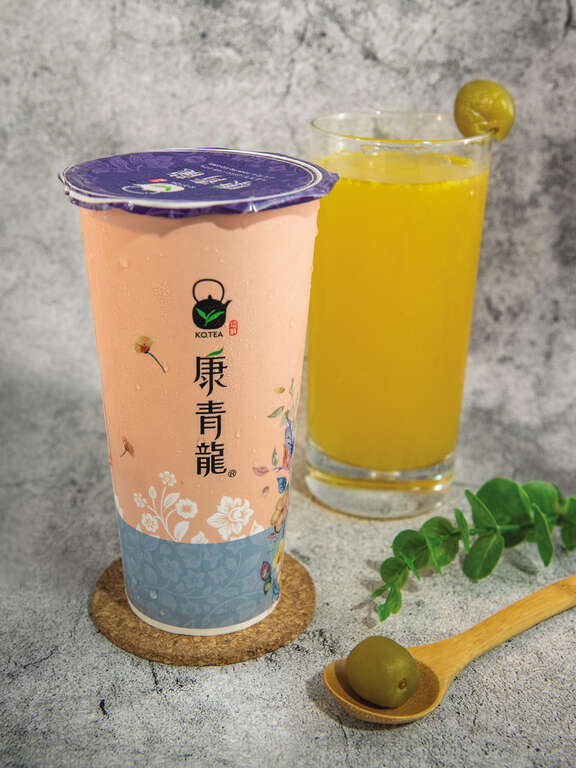 Kumquat Green Tea with Greengages
/ qinglong meiguoyin 青龍梅果飲 /
Kumquat Green Tea with Greengages from KOTEA ( 康青龍) is another drink that elevates tea with juice. With normal green tea as a base, you’ll see kumquat flesh spinning in the cup when you give it a stir. With a single sip, you’ll find it balances the bitterness of the tea with the contrasting flavors of sweet and sour. Don’t forget to rip off the plastic lid when you finish it. There will be two plums at the bottom of the cup. They’re the olive in the martini, or
the cheese served with the wine. Enjoy! 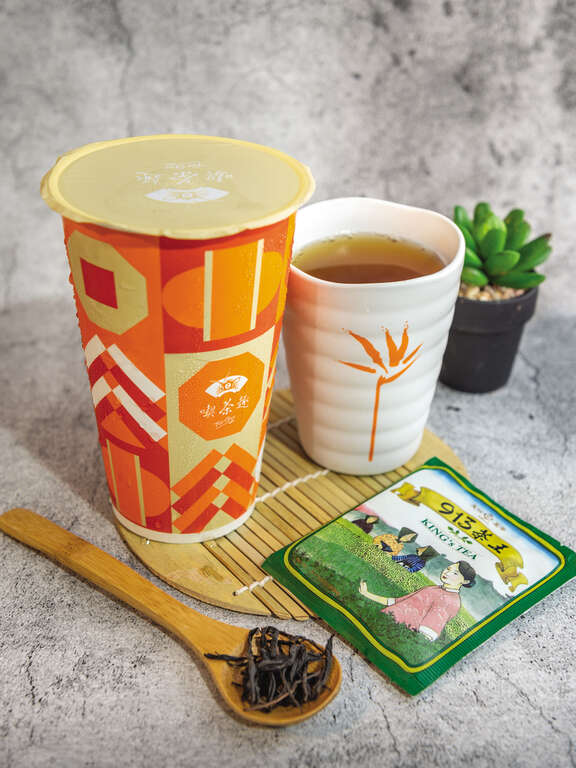 The King’s 913
/ jiuyisan cha wang 913 茶王 /
The King’s 913 from Ten Ren’s Tea ( 天仁茗茶) mainly consists of high-quality oolong tea leaves that are harvested from the mountains of Central Taiwan during spring and winter for the best tasting experience. The relatively lower temperature on the mountains reduces the need for pesticides which subsequently gives the tea leaves a sweeter taste. Moreover, the King’s 913 tea leaves are blended with a touch of American ginseng and leaves that give you a genuine mild sweetness. There’s a reason why it’s called the King. We salute you! 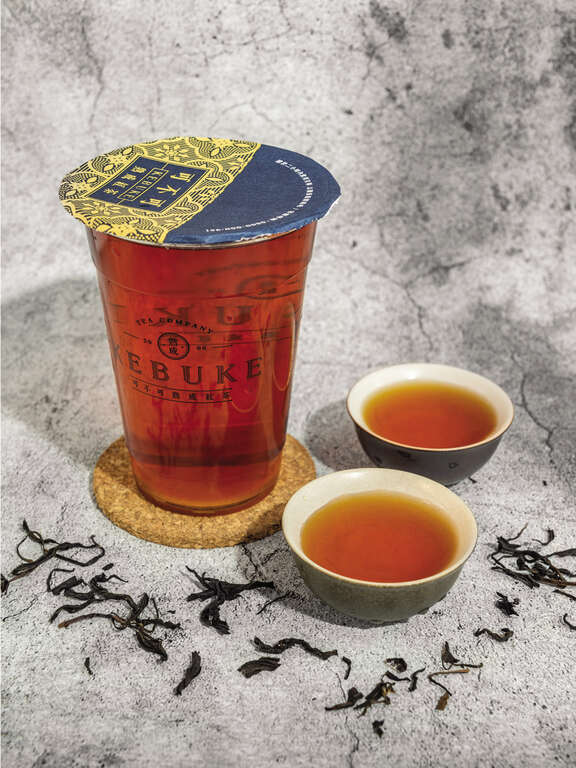 Signature Black Tea
/ shucheng hongcha 熟成紅茶 /
Signature Black Tea is the best seller of KEBUKE ( 可不可熟成紅茶). The tea leaves are carefully selected from Sri Lanka and preserved at the right temperature to be well fermented for a year in Taiwan. The fermentation will make the tea into a deeper amber color after brewing. You might find its taste is stronger and more astringent than others, but the sweet aftertaste follows immediately and last even longer. You’ll also find a fruity and floral scent when drinking it, which makes it a perfect choice to drink after having greasy or deep-fried food. 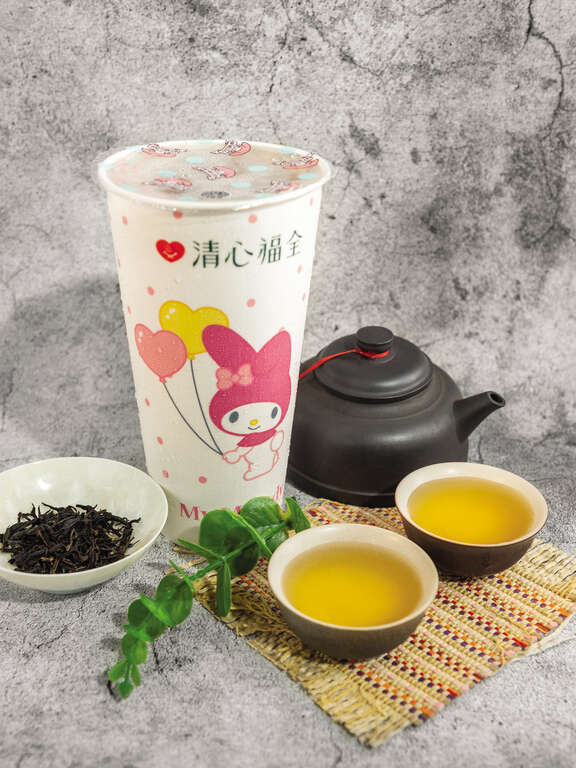 Jade Oolong Tea
/ feicui wulong 翡翠烏龍 /
When Ching Shin ( 清心福全) was established 30-plus years ago, their only product at the time was oolong tea but not everybody’s favorite, boba. “Jade Oolong” is one of their signature drinks that was brought to the public in 2012. Using tea leaves picked from high mountains in Taiwan, the crystal green Jade Oolong enchants people with its elegant scent. The classic way of enjoying it is to have it plain. However, sugar can always be added if you prefer. 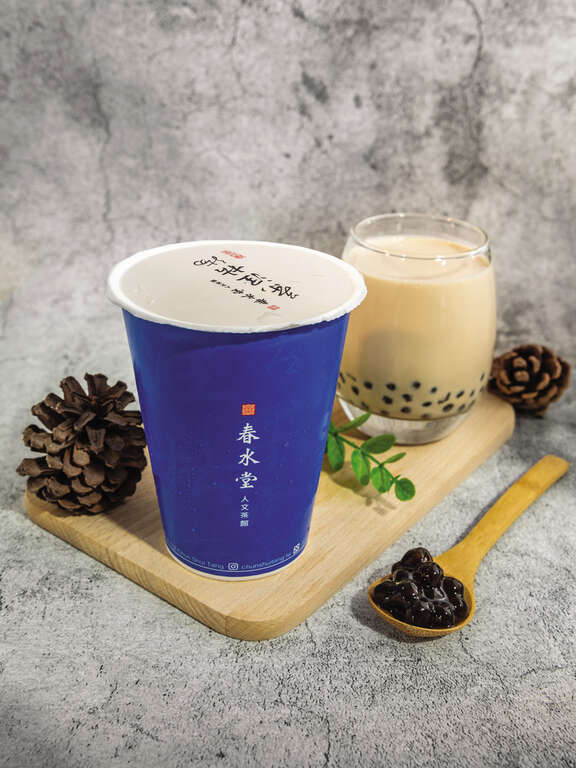 Pearl Milk Tea
/ zhenzhu naicha 珍珠奶茶 /
Chun Shui Tang ( 春水堂) is considered among the first tea houses in the world that invented bubble milk tea. You might suppose the tapioca balls are big and flavored with brown sugar like you’ve tried before. However, at Chun Shui Tang, you’ll find their tapioca balls are smaller and less sweet in comparison to others. This is to make the drink less cloying and bring to the fore the tea itself, which is brewed with actual tea leaves, not tea bags. The type of tea leaves, on the other hand, might change depending on the season and weather to make every sip fresh and unique. 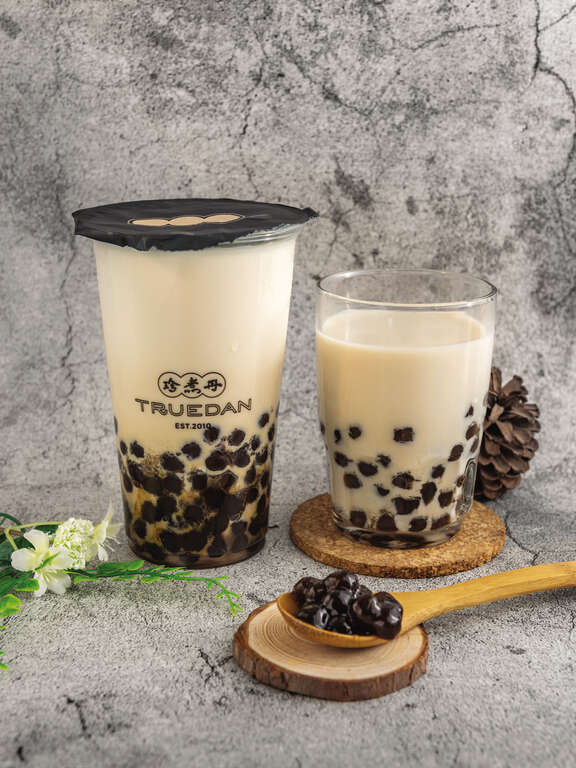 Brown Sugar Bubble with Milk
/ heitang zhenzhu xiannai 黑糖珍珠鮮奶 /
Started from a small shop in Shilin night market ( 士林夜市), Truedan ( 珍煮丹) brought the world of bubble tea to another level in 2010 with its pure handmade brown sugar boba. Their tapioca balls are cooked in condensed brown sugar water for hours before they are added to the milk. The thick syrup of brown sugar can be extra comforting when it’s served in hot milk. Today, Truedan has extended their empire from Taipei to Canada, Singapore, Japan, Australia and more. 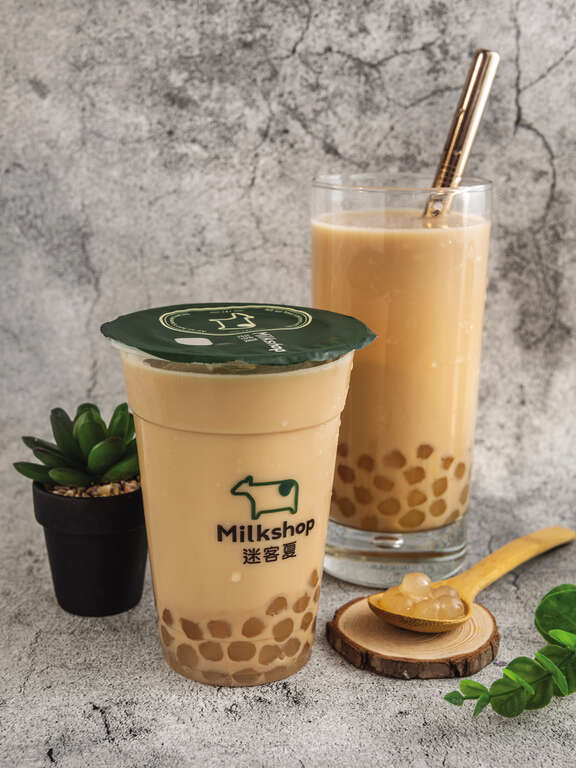 Bubble Milk Tea
/ zhenzhu hongcha natie 珍珠紅茶拿鐵 /
Unlike most shops which always highlight the quality of tea and tapioca balls, Milkshop ( 迷克夏) specializes in milk. Using no cream or milk powder, Milkshop insists on using certified milk that is properly sterilized. The high portion of milk is the reason why they call their product a “latte” and not just “milk tea” in Chinese. Another feature of Milkshop is the white and chewy tapioca balls. To be more accurate, they are crystal-like jelly balls that contain no food dye. It’s not even sunk into brown sugar water at the production stage, just to keep its color clear. Milk lovers, what are you waiting for? 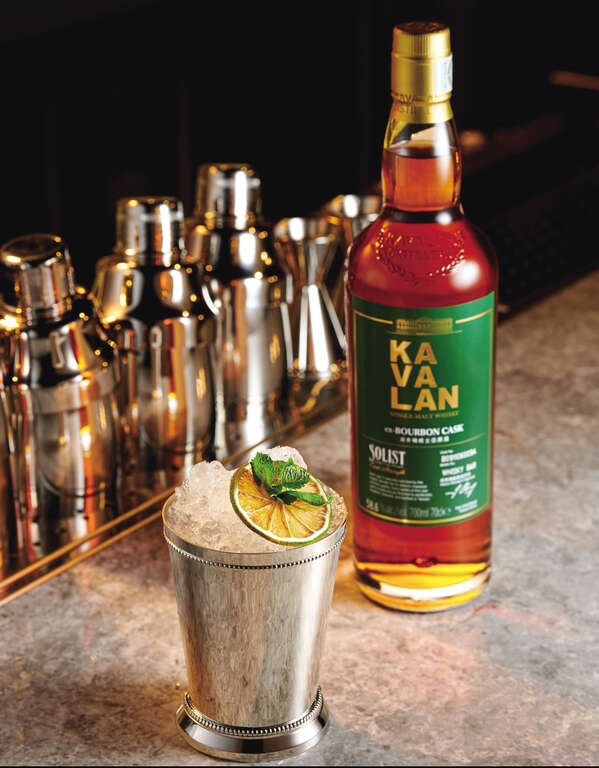 Kavalan Solist ex-Bourbon Single Cask Strength Single Malt Whisky
Many people don’t know that Taiwan is producing whisky. Not only is Taiwan making whisky, it’s making some of the world’s best — laying claim to the No.1 whiskey on the planet. Kavalan Whisky ( 噶瑪蘭威士忌), has been in production since 2008. Their Kavalan Solist ex-Bourbon won trophies at the International Spirits Challenge, the International Review of Spirits, and many other competitions since 2016. Their bourbon barrels are all made of American oak that has a stronger scent than other kind of wood, which make the whisky dignified and rich. 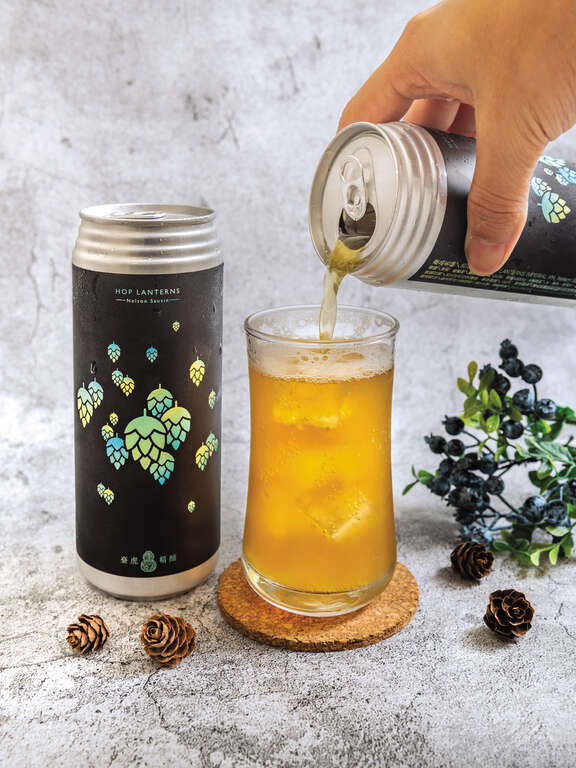 Hop Lanterns DDH
Taiwan is somewhat of a surprising paradise for lovers of craft beer. Taihu Brewing ( 台虎精釀), one of the Taipei-based craft brewers, is the brand you must try if you’re in Taiwan. Famous for making limited edition flavors, Taihu never stops surprising beer lovers with their creative ideas. However, if you want a taste that you can find anytime when visiting Taiwan, try Hop Lanterns DDH that is made from five different hops. Follow its fruity and floral fragrance, and enjoy the spring in Taipei! 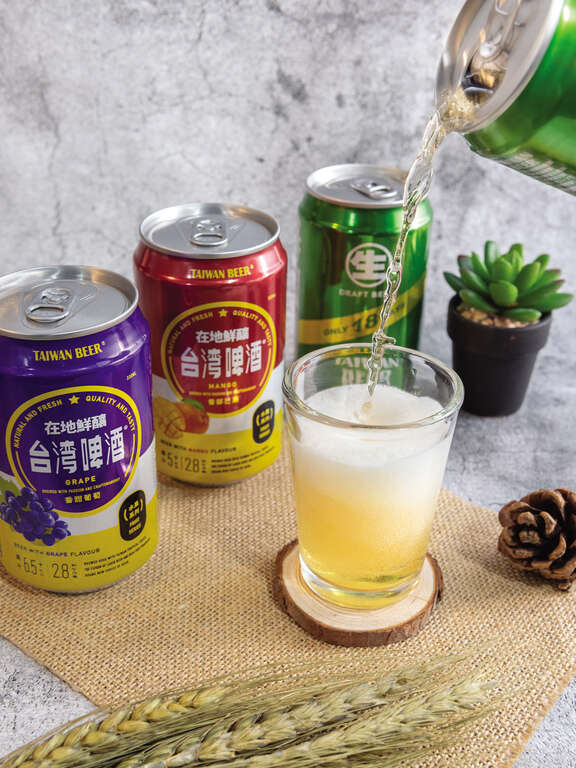 18 Days
You can’t beat a nice glass of Taiwan Beer 18 Days. Refreshing and crisp, it’s called 18 Days because that’s how long it lasts after brewing before it loses its freshness. And, to get you even more into the spring spirit, Taiwan Beer also comes in mango, pineapple, grape and orange flavors. Sweet and fruity, they’re a great twist on a classic beverage and perfect for sipping on a balmy spring day.

Hot Grass Jelly
/ shao xiancao 燒仙草 /
Hot Grass Jelly is a grass jelly (made from mesona tea) served with toppings such as taro tapioca balls, sweet potato tapioca balls, red beans and roasted peanuts. From its name, you can tell that the best way to have it is to “drink” it when it’s hot (though it’s almost like you’re eating it as you need to use a spoon, not a straw). The dessert is easily found in any night market in Taipei while you might also find it served in different ways, e.g. grass jelly juice, grass jelly on shaved ice, and grass jelly with milk. 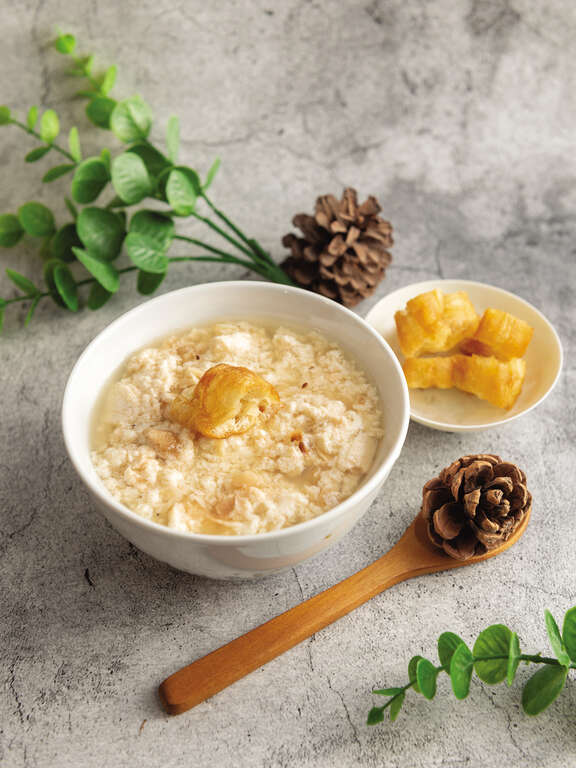 Savory Soy Milk Soup
/ xian doujiang 鹹豆漿 /
Savory Soy Milk Soup, or Taiwanese-Style Soy Milk Soup, is a common item you can find in any traditional breakfast restaurant. It’s a bowl of hot soy milk curdled with vinegar and flavored with sesame oil, green onions, pickled radishes and most importantly, the crispy youtiao! Some stores will add dried shrimp to create even more flavor. It might not be the typical “drink” as you imagine, but it’s certainly a popular option for breakfast, brunch or even late-night supper for Taiwanese. 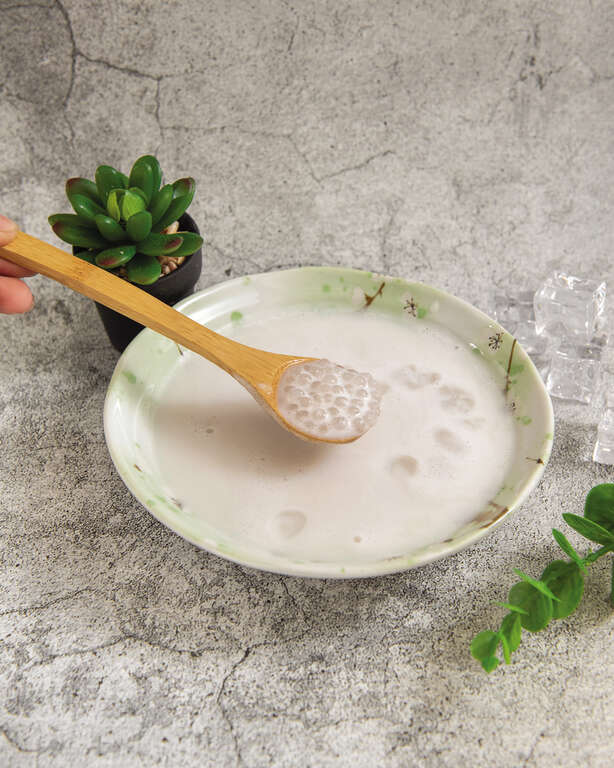 Taro Sago Soup
/ yutou ximilu 芋頭西米露 /
We all know sago is a common dessert in East and Southeast Asia. Most people have it with coconut milk, but here in Taiwan the combination of taro and sago is totally bravo! The sweet taro is cooked in sugar water for hours to create a soft but firm texture. Meanwhile, sago is like mini tapioca balls that melt in your mouth before you chew. Some stores use sugar water as the soup, but you can’t go wrong enjoying it with milk. 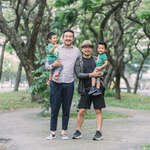 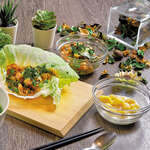 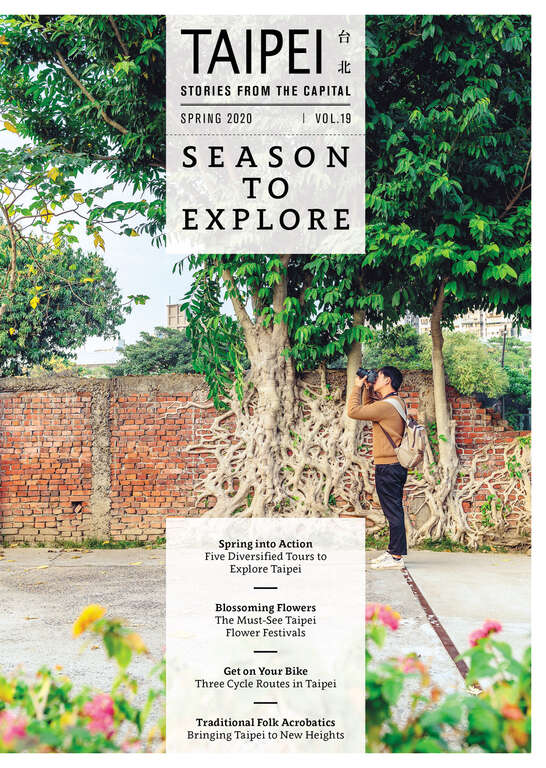