Rows of vendors squeeze closely side by side as the brisk greetings of shopkeepers comprise a raucous symphony. Regulars who know the maze like the back of their hand shop for groceries swiftly, while tourists and visitors look around with curious eyes like Alice arriving in wonderland. All kinds of street foods send mouth-watering aromas flowing through the air, enchanting every living soul like a magic spell.

This is a traditional market in Taiwan, and so much more than that.

At traditional markets, all it takes is a faint smell, or a single bite, to trigger a wave of nostalgia inside every Taiwanese person. It’s the place where parents indulge children with just one more bowl of sweet douhua (豆花, tofu pudding), and where people insist on going every Lunar New Year in order to buy that one dish which takes them back to their childhood. It’s the place where getting lost isn’t so terrifying, because every corner feels like home. 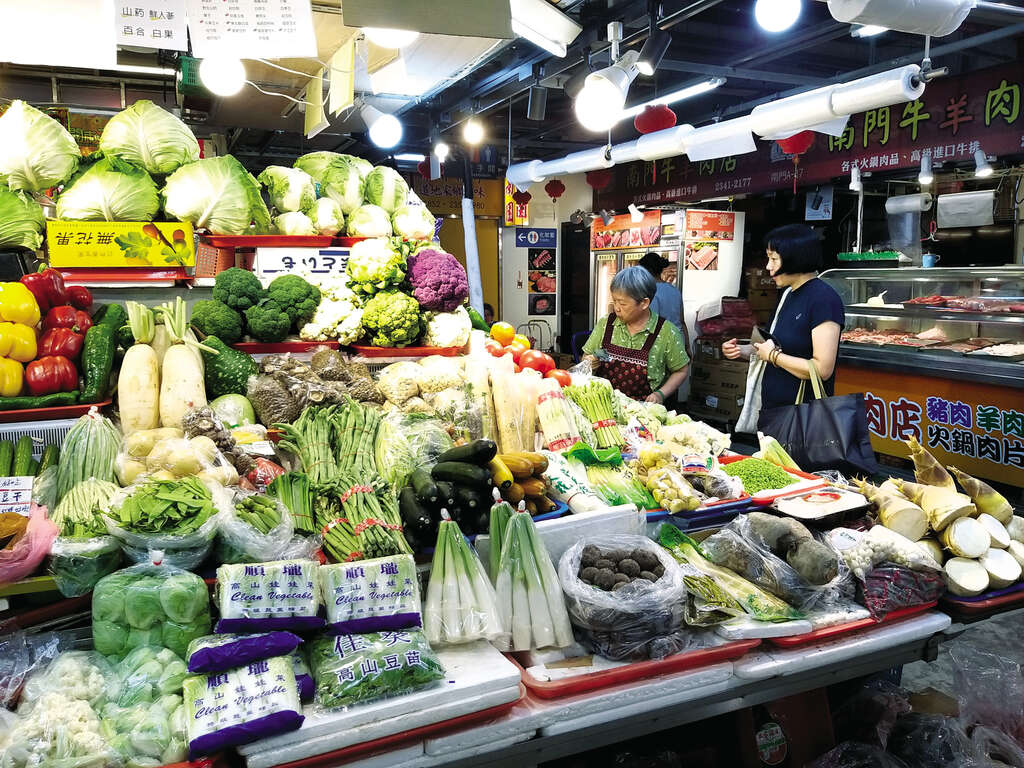 ▲Traditional markets are important life centers for Taipeiers. You can find all kinds of fresh vegetables and ingredients there.

Being one of the most advanced cities in the world, Taipei succeeds in keeping the delicate balance between modernity and the preservation of its heritage, while traditional markets in this city have charmed countless people from around the world. Just a two-minute walk from MRT Dongmen Station (捷運東門站), it is fair to say that Dongmen Market is the best place to start for market explorers in Taipei.

The birth of Dongmen Market can be traced back to nearly a century ago during the Japanese era. At first, it was merely a huddle consisting of various vendors. After the Chinese Civil War in 1949, many immigrants from China gradually settled down near Jinshan South Road (金山南路), where the market slowly became the center of the community. Nowadays, as there are many vendors that are frequently visited by celebrities, it eventually earned itself the nickname of the “Noble Market.”

The high quality of goods, historical ambiance and strong local connections attract not only Taipeiers but also travelers who are ready for a novel experience. When visiting Dongmen Market, try some of its best ready-made delicacies, such as fish balls, spring rolls, and red bean cake, or classic dishes brought over from China. No matter what you choose to sample, the fascinating charm of Dongmen Market never fails to captivate local gourmets. Chewy fish balls with pork stuffed inside are just like mini piñatas: with every crack and every bite come incredible surprises. Don’t forget to try the braised pork rice and soup as well.
🏠1, Ln. 75, Linyi St., Zhongzheng Dist. 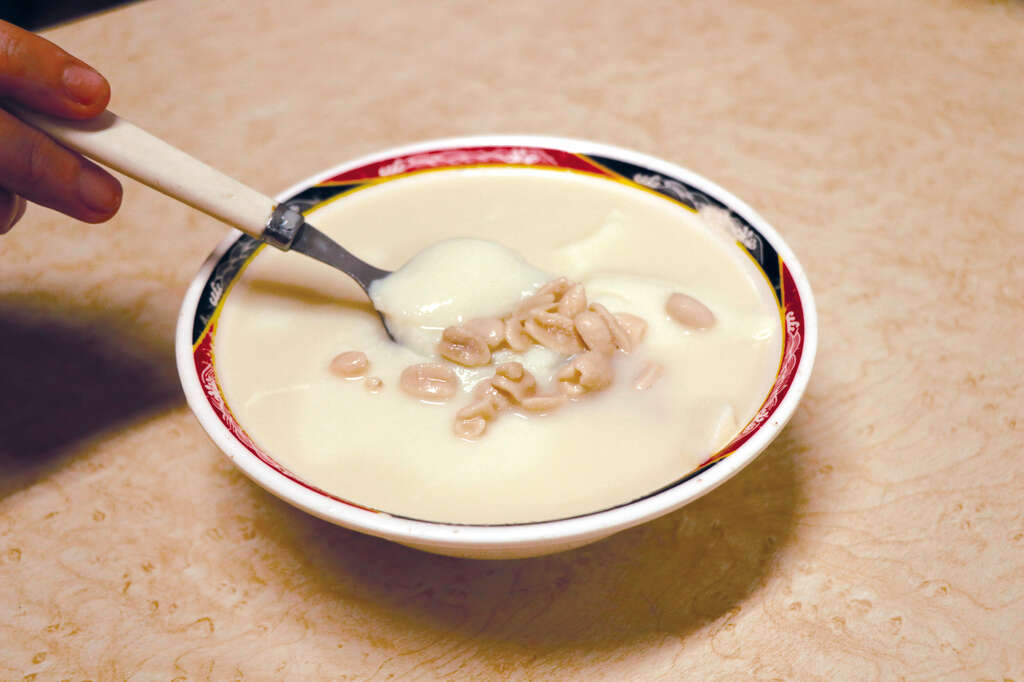 Hiding in a humble-looking stand is the best douhua, a sought-after dish on the bucket lists of many Taipeiers. With only one item on their menu, you know they’re bound to nail it.
🏠5, Ln. 142, Sec. 1, Jinshan S. Rd., Zhongzheng Dist. Li Long has served as a local favorite for breakfast and snacks for more than a decade. Try a meat pie or green onion cake, and you’ll understand why it can never be replaced.
🏠15, Ln. 79, Sec. 2, Xinyi Rd., Zhongzheng Dist. Binjiang Market is praised as the “Chef‘s Garden,” as this important wholesale market has earned its place in the hearts of local chefs with its delectable ingredients. The fruits and vegetables are colorful and sweet, while the meat and seafood are fresh and clean.

For regular families or visitors, try to visit the vendors on the street at dawn. You will see owners chatting with their customers like old friends, while recommending and explaining all kinds of ingredients. Every stand is an encyclopedia, ready to fascinate you with its wonders.

One also mustn’t miss trying the fresh seafood. Plenty of seafood vendors sell all kinds of seafood that you probably cannot name. One thing you don’t have to doubt is how fresh they are. Any sashimi addicts in the house? If so, An An is the perfect place for you. Take a bite of its incredibly fresh sashimi, and brace yourself for the so-called “explosion of the sea” in your mouth.
🏠29, Ln. 410, Minzu E. Rd., Zhongshan Dist. With its various types of noodles, Ude is a magician that never runs out of new tricks. The green noodles are made of spinach, and the pink noodles utilize red yeast rice. If you thought you knew noodles, think again!
🏠29, Ln. 370, Longjiang Rd., Zhongshan Dist. Goose meat is one of the most traditional dishes in Taiwan. The smoky flavor, chewy skin and tender meat found at this small stand is the whole package.
🏠47, Ln. 410, Minzu E. Rd., Zhongshan Dist. 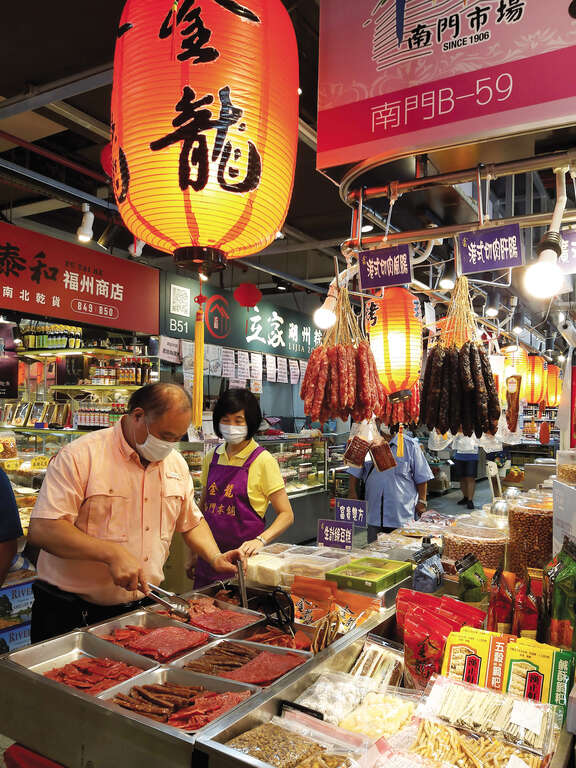 When you ask Taipeiers about traditional markets, Nanmen Market will probably pop into their heads within seconds. With its grand history and intriguing stories, it’s no exaggeration to say it is the proud leader of them all.

With a history of more than one hundred years, Nanmen market offers the most authentic flavors of traditional delicacies from the Japanese or Post-war eras. One can find elders in Nanmen Market looking for a specific store for a particular dish insisting that this is the only place that makes “real” dumplings (or tofu, or meat buns, or...). While others may frown at their stubbornness, they find it impossible to explain how a sniff and a nibble bring them straight back home, which is often somewhere far across the ocean.

Famous for various options when it comes to traditional items, such as dried fruit, jerky, Chinese cured meats, and zongzi (粽子, sticky rice dumplings) that are commonly seen on local dinner tables, Nanmen Market is always crowded during the Lunar New Year, Dragon Boat Festival or Moon Festival, and has become a place where authentic goods that cannot be found elsewhere are cherished, preserved, and passed on. A shiny trophy stands tall at Hehuan with the words “Best in the World” written on it. The tender beef and chewy noodles reach an incredible balance, drawing tons of fans to enjoy this beloved delicacy.
🏠Booth D13&14 on the second floor 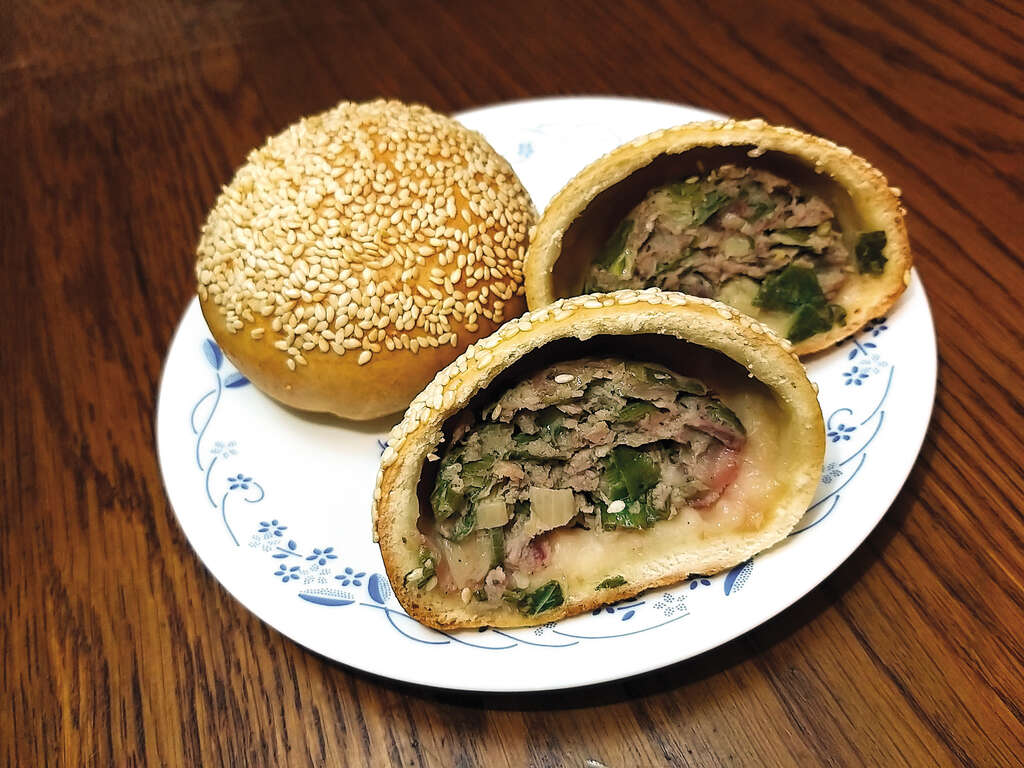 The menu features only four dishes, including baked pepper buns (胡椒餅) made with Wagyu beef and congyoubing (蔥油餅, scallion pancake) adored by regulars. The one thing these dishes have in common is how good they are.
🏠Booth D13&14 on the second floor This small jerky stand that offers plenty of flavors has become a star with its famous “paper meat,” which has a crispy texture and tastes like potato chips, with an irresistible aroma.
🏠Booth B34~38 on the first floor When it comes to vintage Taipei, Wanhua District, also known as Bangka, is often the first area people think of. Sitting five minutes away from Longshan Temple is U Market, with a story just as interesting as that of the city itself.

Back in 1918, U Market came to life and was named “Midorimachi Market (Luding market, 綠町市場).” It served as one of the melting pots for Taiwanese and Japanese. However, the businesses were forced to shut down due to World War II. It was not until the post-war period that communities of Chinese immigrants and young people from southern Taiwan brought prosperity back to the market.

As Taipei entered the ‘90s, U Market began its journey of metamorphosis and has since become a space in which nostalgia and innovation blend together gracefully. The old U-shape building became a municipal historic site in 2006 and also serves as a platform on which discussions about local issues and cultural creations take place. The neighborhood, including the traditional market on Sanshui Street (三水街), is where visitors can find modern creative artworks and traditional street eats that have never changed through the ages, all in one place. 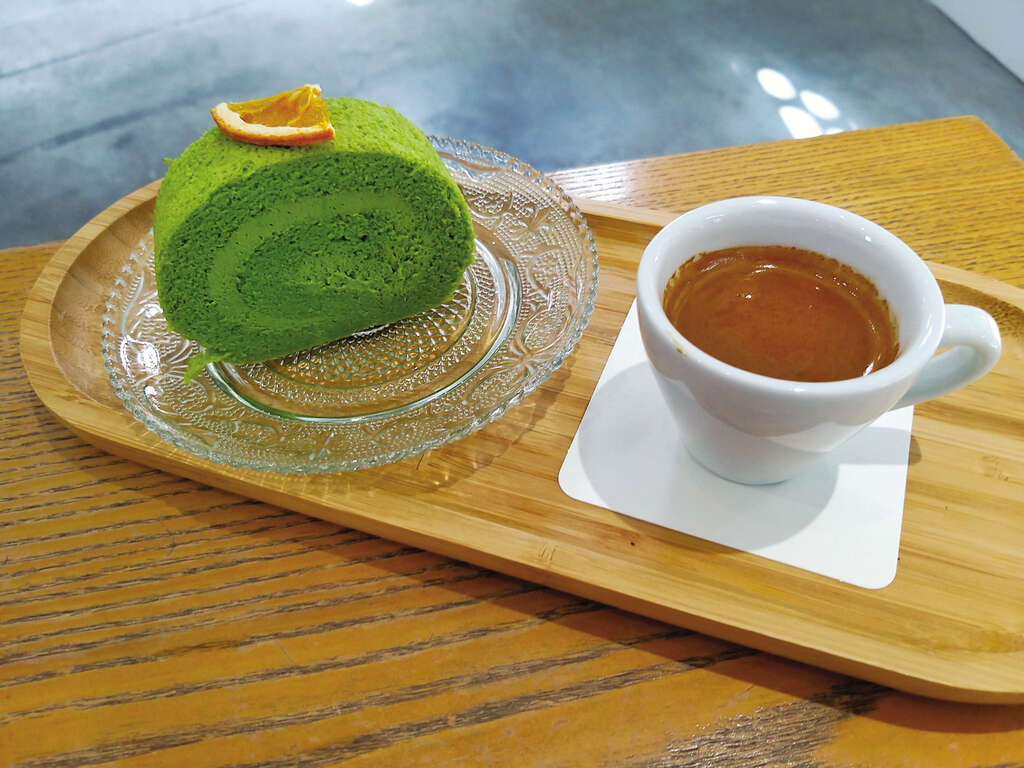 Sipping coffee at MOT CAFÉ, you may easily forget that you’re in the busiest city in Taiwan, due to its laid-back ambiance and the bright sunlight surrounding you.
🏠70, Sanshui St., Wanhua Dist. Tianmu (天母) is often seen as one of the most special zones in all of Taipei City. Originally a residential district, it was under the influence of the U.S. Army stationed there in the 1950s, and has long been considered the most “exotic” region in the city. With its high-end department stores, elegant art centers and vast parks, it is no surprise that Shidong Market in Tianmu is different from its peers, as it focuses on environmental protection and sustainable operations.

Unlike the other markets mentioned above, Shidong Market is a rather new one, established only in 1992. However, it has been reorganized and constructed into a five-star eco-friendly market.

A couple examples of the market’s environmentally- friendly stance are its solar-power electricity system and rain-collecting facilities. The recycling job done by vendors is also marvelous. Unlike most of the traditional markets that are hidden in alleys, Shidong is in an air-conditioned building with bright lighting installed. With great effort, Shidong Market has shown the world that being a traditional market doesn’t mean it cannot take the road less traveled. Here, neither menu nor chairs are needed. Tell the chefs your budget, and let them work their magic. Enjoying the feast, you will forget that you’re standing, because it feels like flying.
🏠Booth 88 on the first floor With more than 30 dishes to choose from every day, Bao Bao serves dishes with a “taste of home.” The juicy fried chicken and the grilled fish are the top choices.
🏠Booth 234 on the second floor Kong Ming Tang is known for its low-sugar pastries. While traditional flavors such as shredded turnip cakes and yolk cakes are absolutely authentic, new options like strawberry daifuku mochi and puffs are also popular choices.
🏠Booth 23 on the first floor