Meet LeHo, The Young Painter Putting Taipei Under the Kaleidoscope

When most people head to Taipei’s riverside parks, it’s normally for the long, ambling pathways that trace the waterways from Xindian (新店) and Nangang (南港) all the way up to Tamsui in the north. But over the past few years, it’s the park’s floodwalls that have become of increasing interest. In Rainbow (彩虹), Dajia (大佳), Zhongzheng (中正), and several other riverside parks, running sections of these concrete barriers have been turned into colorful canvases — just one of the vivid changes brought to Taipei by the city’s growing community of street artists. ▲Inspired by local elders’ memories of plucking fish from the ground at the riverside after a flood, LeHo created Riverine (水邊) for Taipei New Story, a project he co-produced with Taipei City Government to tell the stories of Taipei’s rivers.

LeHo (何彥霖) is one of these transformative painters. With his whimsical subjects and palette of pastels, he isn’t what most expect when the word “street artist” comes to mind. And yet, anyone who has spent any amount of time in Taipei or Kaohsiung (高雄), will have likely wandered past one of his enchanting murals.

Hailing from Tainan (台南), this soft-spoken painter has been bringing splashes of his mellow magic to walls, embankments, and apartment buildings across the capital city. Additionally, he's been working with nine other contributors on Taipei New Story (台北新畫堤), a project to turn the city’s riverside parks into “an urban picture book.” We sat down with LeHo to discuss graffiti, street art, and the spectrum of twists he’s been bringing to the scene. 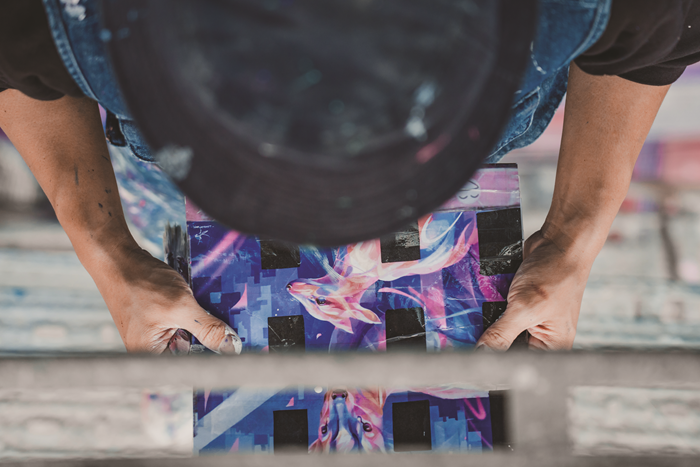 ▲Connecting his art to the lives of Taipei locals is an essential component of the multifaceted meanings behind LeHo's works. (Photo/@tw_ghostcat)

Perhaps the first thing you notice about LeHo is his laidback, approachable demeanor. It’s fitting then that the 27-year-old artist’s moniker is a play on lí hó, or “hello” in Taiwanese. “While I was working on my first street art projects down south, lí hó would always be the first thing I’d hear from the neighbors every morning,” he says. “Incidentally, lí hó sounds a lot like my English name, Leo Ho, so the name stuck pretty quickly.”

As might be apparent from his preference for soft and soothing hues, LeHo started out as a watercolor painter. “I was experimenting one day, and I got to thinking what my work would look like painted directly onto a wall,” he recalls. “My work was picked up on social media, and I was invited to take part in Kaohsiung’s 2016 Wallriors Street Art Festival (高雄前金國際街頭藝術節). That was where my journey really started.”

One of LeHo’s first large public projects, Jellyfish Princess (水母與猴), was completed in 2017 in Kaohsiung’s Weiwu Mi-Mi Street Art Village (高雄衛武迷迷村), and shows a pair of gibbons swinging through a dreamlike bloom of drifting invertebrates. A year later, he returned to the area to create Calling (天空之門), a diptych of two fantastical creatures, a Pegasus and a flying seahorse, set opposite each other across two four-story apartment buildings.

▲Believing that spiritual animals stand guard over our neighborhoods, LeHo hopes his creations can also bless the locals in a unique and culturally relevant way. (Photo/@kevintsg)

As is likely apparent from LeHo's growing portfolio of public art, his work is characterized by the use of animals. “I see animals as carriers of information, human emotions, and stories,” he says. “Animals are a way of connecting the viewer and the painting. When you encounter an animal, you always get a reaction, whether the animal is curious, scared, or happy to see you. Contrast this with humans, and we can be impossible to read. Not being able to understand somebody can be a very lonely experience. So, by featuring animals, I try to foster a connection between the viewer and my work.”

Street Art Meets Public Art
Since 2017, LeHo has painted at least 14 animal murals around Taiwan, most of which are in Kaohsiung and the Taipei area. “Honestly, I see myself as something in-between a street artist and a public artist,” he says. “Street art is about expressing yourself; it’s about conveying a message through the image. Public art, on the other hand, is more of a service. You’re thinking primarily about how you can improve the environment; about the effect your work will have on the surrounding space.” 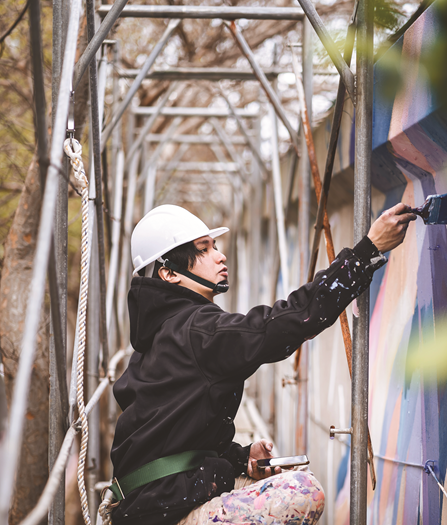 ▲To LeHo, painting murals and creating public arts are the ways to carry street art from Taiwan to the world. (Photo/@tw_ghostcat)

As he usually creates murals that are inspired by local stories, LeHo does not consider himself a graffiti artist. “There’s quite a lot of confusion between street art and graffiti. Graffiti is artistic writing. The creativity is often in the lettering or how you stylize your message,” he explains. Creepy Mouse (異鼠), for example, one of LeHo’s contemporaries, recently exhibited a graffiti art series in Tainan’s Soka Art Center (台南索卡藝術中心) which featured messages in Chinese which were stylized into Germanic Gothic Script.

From Hip-Hop to Modern Graffiti
“I wouldn’t say that my style is really hip-hop, but I do think it’s important to recognize the relationship between graffiti art, street art, and hip-hop culture. There are four elements of hip-hop culture: breakdance, graffiti, MCing, and DJing,” he explains.

In its most rudimentary form, graffiti has been traced back millennia. But hip-hop graffiti and street art originated in the U.S. during the mid-20th century, emerging in predominantly black communities in Philadelphia and later New York. With the invention of affordable spray paint, disenfranchised artists began “bombing” or spraying designs on subway trains, allowing them to exhibit their work across the city. This style eventually moved from trains to other outdoor areas.

Hip-hop culture, graffiti, and street art didn’t arrive in Taiwan until the 1990s, after it had spread internationally, through the works of pioneers like Fab 5 Freddy and Futura 2000. It quickly gained local popularity, though this was among very different communities to those who had produced it in the U.S. Taiwanese graffiti artists and street artists were mostly young, middle-class, and had fine arts backgrounds. Street art and graffiti were therefore a means of showing off artistic ability rather than a form of protest. Still, a lack of spaces where artists could paint legally meant that many went underground. However, as social acceptance of street arts has increased over the past few decades, the government has opened up more spaces and graffiti walls for artists to create freely. 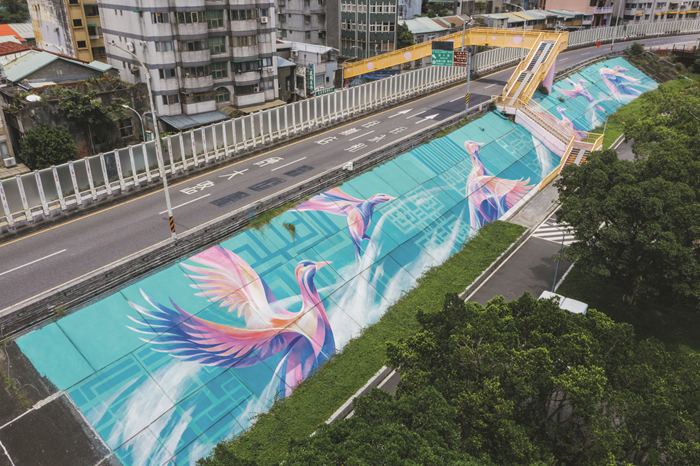 ▲Snow Goose, conducted in Yingxueli, is a piece that turns fluorescent fireflies into wild geese who continue to accompany local residents, even after they have disappeared from the local environment.

“Nowadays, there’s plenty of opportunities to paint here in Taipei,” explains LeHo. “Taipei Cinema Park (台北市電影主題公園) in Ximending (西門町) is one of the best areas to check out, and then of course there are citywide public art projects like Taipei New Story”—
to which he has contributed a couple of murals. Most recently, he painted Snow Goose (螢橋雁), a dynamic duotone mural that stretches along an embankment in Zhongzheng Riverside Park near MRT Guting Station (捷運古亭站).

The goal of Taipei New Story is to tell local tales through street art, so with Snow Goose, LeHo says he aimed to bring back a part of Taipei’s past that had been lost to history. During the Japanese occupation, the Zhongzheng riverside, then known as Kawabata Town, now Yingxueli (螢雪里), was a favorite local spot for catching fireflies as well as a habitat for wild geese. “The area has completely changed since then, so I wanted to reinterpret what it would have felt like to wander down here on a spring/summer evening eighty years ago,” he says.

While not part of Taipei New Story, another mural that is particularly special to LeHo is Interwave (交織), near Dazhi Bridgein Zhongshan District’s Dajia Riverside Park. “That area means a lot to me because I spent a lot of time there while I was studying nearby at Shih Chien University (實踐大學),” he recalls.

▲Known for using animals as a metaphor for human emotions, LeHo hopes people can embrace true feelings in our lives. Even if they might be as complicated as tangled hair, they can be straightened out, like birds in mid-flight.

LeHo explains that the mural, a kaleidoscoping portrait of a woman with birds for hair, is a metaphor for the intricacies of human emotion. “That’s another reason that I like to paint animals: we attach so much meaning to different animals, and so building them into my work really adds depth. You look at a bird and you see freedom, a rabbit represents vigor or energy, and an ox reflects strength.”

“These are all characteristics that we can possess, too, and so I hope that my murals can be a reminder of that to people. I hope that they can look at them and realize that they can be just as free, just as vigorous, or just as strong.” 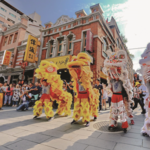 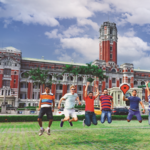 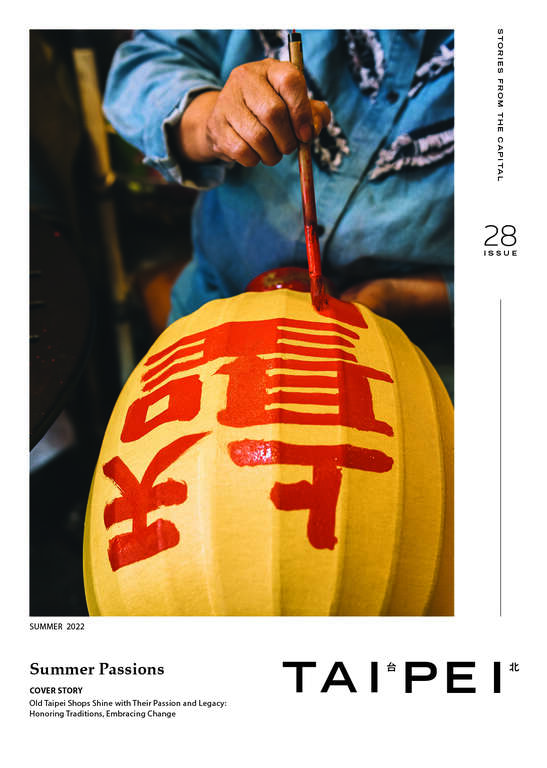